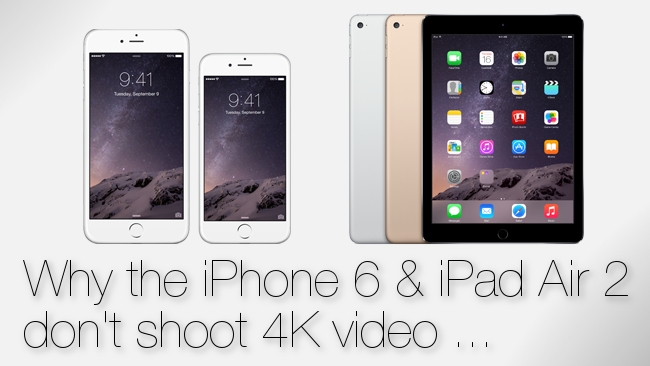 While the 2014 launch of Apple's updated mobile devices led to an avalanche of sales, the decision to stick with HD video recording underwhelmed some techies. We take a look at the issue and surmise at least three reasons why your new iPhone 6 or iPad Air 2 doesn't shoot 4K video.

As always, when Apple announces a spate of new products (or rather updates to its popular line-up of mobile and desktop devices), the tech world takes serious notice, and for good reason. No other electronics company generates the level of excitement or sales that Apple does when it unleashes its beautiful products onto the world.

Yes, there's a lot to love about Apple's 2014 range of products, which CEO Tim Cook declared the strongest product line-up ever. If you're skeptical of such a boastful claim, just take a gander at the 5K iMac that will retail for the same price as Dell's 5K display sans computer. Yet, for all the hoopla amid the impressive product showing, some were disappointed that the latest iterations of the iPhone and the iPad Air didn't include a larger image sensor and the capability to record 4K video.

We believe that there may be very good reasons for this omission, especially if you're willing to adopt Apple's way of thinking for the purposes of this investigation.

Apple competes via vision, not features

As a RedShark reader, you likely recall (or were impacted by) Apple's decision to follow-up Final Cut Pro 7, which had built a huge footprint in our industry, with the controversial Final Cut Pro X. Upon release of FCPX, many professionals cried foul, exclaiming that its essentially trackless workflow was too radical a departure from the norm, and that many features pros rely upon were absent at launch. By now, Apple has added back a lot of the functionality pros need, but from a public relations standpoint, the damage had been done, and FCPX and future versions may never enjoy the same market penetration as its immediate predecessor.

Taken from Apple's perspective, however, FCPX was less of a misstep than a dose of necessary pain to move in an entirely new direction. There are unconfirmed reports that the late Steve Jobs, upon viewing the initial development plan for FCP7's successor, replied something along the lines of "this is not what we do!" What he presumably was referring to was the incremental, feature-by-feature improvement of, well, let's call it FCP8, for lack of a better term. Sure, such an update would have satisfied pros, but Jobs may have had his eye on the huge swath of casual and prosumer users, whose numbers far exceed that of professional users. Instead of catering to the pros, he wanted a new vision for the future of video editing, one that made editing more inclusive for beginners while retaining enough advanced functionality that the product wouldn't be crippled in professional environments. It's a matter of debate as to whether FCPX, given Job's vision for it, was a success. But this case does prove that Apple, historically, isn't afraid to upset even its die-hard supporters in service to a grander vision.

In this light, Apple's exclusion of 4K video recording in the iPhone 6 and iPad Air 2 makes a little more sense. Apple feels zero pressure to compete, feature-by-feature, with current Samsung, Sony, and LG flagship mobile devices. Apple instead trucks right along with its own vision for mobile devices, which is heavy on ecosystem rather than a feature competition, meaning that circa 2014, Apple will squeeze every last bit of use out of HD video recording, and pair it with advanced applications like the bundled Replay, which will create automatic edits of that HD footage.

Much has been made, generation over generation, of Apple's refusal to design mobile devices with replaceable batteries and storage expansion through a micro SD slot. To be fair, Google, in its own flagship Nexus products, has steered the same course. For Apple, some would argue that the extreme thinness of its products might make adding a larger sensor camera impossible. But it's hard to believe that Apple, with its wealth of resources and design acumen, couldn't include the components for 4K video recording if it was so inclined.

The cynical viewpoint is that Apple doesn't want owners to use the same iPhone handset longer than 2-3 years without updating to the latest version, and adding storage expansion and battery replacement would run counter to that aim. There may be some truth to this notion, as stunting the lifespan of its products in such a way pushes users toward newer models sooner and money into Apple's coffers at a quicker pace.

There is another reason for Apple to exclude these user options. The longer older iPhones and iPads are in use, the more fragmented its universe becomes, which becomes a challenge for app developers. Contrast the Apple model with that of Android; Android's fragmentation of operating systems and devices of varying specs across multiple device manufacturers makes developing for Android a problematic exercise.

While it's definitely possible to enjoy a premium Android experience with a current flagship handset, to call the Android experience, in general, a premium experience would be inaccurate due to the 'something for everybody' approach. If you own the Samsung Galaxy S5, you can download almost any app on the Google Play Store and it will work just fine (with the exception of apps which require root access, unless you decide to go that route). But as you drop to current mid-level and budget Android handsets, not to mention older Android handsets, your app options dwindle.

By constraining the life cycle of its iPhones and iPads by limiting component replacement and store expansion, Apple can be assured that the majority of mobile users are on a current or close-to-current handset, which gives its own and third party developers an easier time in developing apps that leverage the devices' top-of-the-line mobile processors, and cement the impression that if you're holding an iPhone or iPad, you're holding a premium device with access to a plethora of apps, either bundled or in store, that are more-or-less guaranteed to work on those devices.

Finally, let me take you through a hypothetical scenario with a product that doesn't exist. Let's say that the Apple iPhone 6 had the capability to shoot 4K video. And let's say you opted for the mid-capacity iPhone 6 with 64GB of storage space. Even if you take the heavily compressed UHD recording of the Samsung Galaxy S5 as a baseline (350MB per minute) and its 5-minute recording limit, each five minute video would eat up 1.75 GB of space. If you're the type that takes a lot of videos, it wouldn't be long before your phone would be full and in need of a purge. Now imagine that you opted for the lowest capacity iPhone at 16GB of storage. At least some users would look at their supposed premium device and wished they had purchased something a little more premium, perhaps something that isn't adorned with the Apple logo, and likely something with a micro SD slot.

In summary, Apple didn't include 4K video recording in its iPhone 6 and iPad Air 2 devices because, for business reasons, it eschews the type of user expandability that would make 4K recording practical, and, quite simply, it isn't part of the company's vision for premium mobile products...this year.