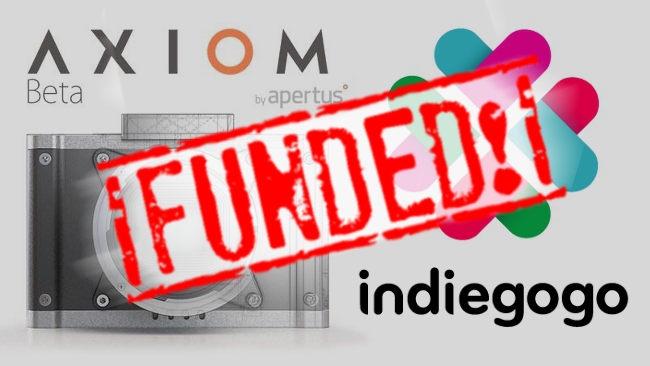 The proverbial "little engine that could," the Axiom Beta open source 4K camera project, just reached its funding goal on Indiegogo. Now it's time to take those stretch goals a little more seriously.

Congratulations are in order; on behalf of RedShark News, I want to raise my glass to the Axiom Beta open source 4K camera project, which only hours ago cleared its first (and most important) crowdfunding hurdle in its fixed funding Indiegogo campaign. Kudos, everyone!

If you haven't been keeping tabs on the project, here's the "Reader's Digest" version:

The Axiom Beta is the work of the folks at Apertus, a group committed to open source software and hardware development for cinematic technology. With the intent of producing a fully functioning, fully modular open source 4K camera priced well under $10,000, the Axiom team developed a proof-of-concept protoype, then launched a crowdfunding campaign to fund further development. Those that pledged at the pre-order level and above would be able to purchase the Axiom Beta at cost, meaning for just the cost of parts, assembly, and shipping, with zero markup.

With just over a week to go, the project was around 30,000 Euros away from its goal, but a stream of positive news helped carry it over the top, including Magic Lantern involvement (the team that unlocked the true potential of Canon DSLRs), new camera options and stretch goals.

While it seemed that those stretch goals, which include a Axiom Beta remote with real analog knobs and buttons, active Canon EF lens mount, and an active battery mount, seemed like a pipe dream just a few days ago, they are all now very much in play.

Sebastian Pichelhofer from the Axiom Beta project is understandably excited:

"It may sound weird but this moment and the ripples it will create could write history that will affect us all far beyond the AXIOM Beta. And I am really proud that we here together are all part of it! The campaign has already been a huge success. It has brought together lots of like-minded people with a common goal and laid the foundation for people to join forces in pushing open technology into the world of cinema cameras and beyond."

As of this writing, there are just over 60 hours left in the project's crowdfunding campaign. Head on over to the Axiom Beta project page on Indiegogo for more details or to join the fun for the home, ahem, stretch.