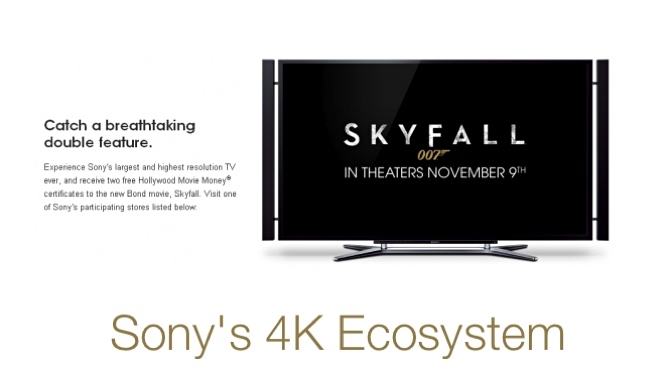 Sony begins to flex its 4K ecosystem. What's an ecosystem? It's what happens when content owners also control the means to distribution.

There are some well-known examples already. Apple, Google, Amazon - we hear about them every day. By owning the whole pipeline, they control access and prices, up to a point. Luckily with multiple ecosystems, there is competition, which helps to moderate costs to consumers - and in the case of hardware, it drives down prices remorselessly.

Sony has its own ecosystem, focused less on tablets and e-Readers than domestic media consumption. And with the arrival of 4K, they need every ounce of a complete ecosystem they can get.

The thing about 4K is that you can't  get any content yet. You can buy 84 inch Bravias for what most people think is a lot, but which is actually completely in line with what the first plasma screens cost. In comparison the first plasmas had pitiful specifications without any trace of HD; we were just happy to marvel at their flatness.

So, to sell 4K screens and projectors to consumers, expect Sony to flex its ecosystem muscles.

The much rumored PS4

For a start, we think the next Playstation (the PS4) will support 4K. It will have a 4K output for connection to 4K screens. It may have some type of new 4K media - or maybe it will just support downloads.

But the point is that Sony has 4K content. Sony pictures has access to stuff that is already in 4K: Feature films.  Analogue films can be scanned at 4K and even digital films that were not acquired in 4K will look better in 4K than a third or forth generation film copy that you might have seen in the cinema.

And, in a small way - very small! - we're seeing signs of the Sony ecosystem coming to life. Here's an example, which is almost trivial, but you have to start somewhere.

Sony is giving away tickets to Skyfall in several US stores to anyone taking a demo of the new 4K Bravia. Of course, only a very small proportion will be able or willing to afford the $25,000 cost of the set, but it's a smart move. Spreading the world is what is important to 4K a the moment. And what better way than to get them in front of a 4K television - and then put them in the cinema for comparison.

I doubt that the average consumer will be able to stop talking about it.