Canon 7D Mark II debuts, but what does it mean? 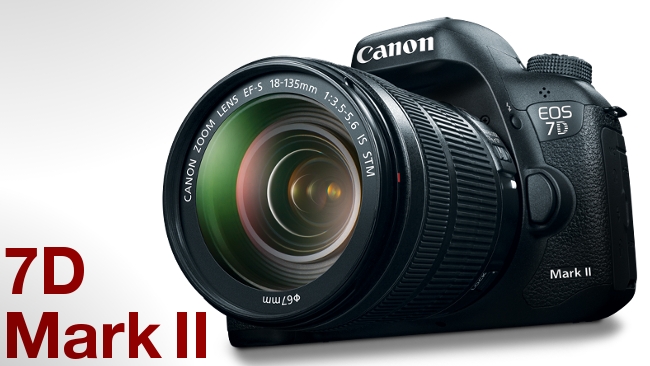 Canon finally shows off its long-awaited successor to the 7D, the 7D Mark II. But what does its confirmed spec list say about the company's intentions?

At the tail-end of this year's IBC and start of Photokina, Canon has finally released the next iteration of its 7D line of APS-C sports photography cameras, the 7D Mark II. Although the rumors of a new 7D have been circulating literally for years now, the rumblings leading up to Photokina were of a camera like the 1DC, but possilby without 4K recording. For video shooters, sadly, that rumor is true.

Of course, I think we were all hoping Canon would feature some video recording option at resolutions above 1080p (4K would have been nice, or even QHD 2.5K), but the 7D Mark II will cap resolution at 1080P, although it does add 60fps recording and official support for uncompressed HD out through HDMI. But with the Panasonic GH4, Sony A7s, and the recently announced Samsung NX1 (also billing itself as an APS-C sports photog's camera, but with potentially more advanced sensor tech) all supporting some variant of 4K recording, either internally or externally, one wonders exactly what Canon's play is here.

Canon's 5D Mark II kicked off the HDSLR revolution, but it wasn't planned. In fact, it could be seen as a mistake, as the advanced (at the time) video capabilities of its DSLRs made those cameras popular amoung shooters, which likely ate into its pro video profits. With this latest version of the 7D, Canon refocused on the action photographer, all but ignoring the video advancements of competitors with similarly-priced cameras. When you take a step back from it, it makes sense; Canon sells far more equipment to photographers than video shooters, and why should its DSLRs compete directly against other Canon product categories like pro video? The big take-away may be that Canon is quietly removing itself from the DSLR video revolution that it accidentally started.

News source Planet 5D released an exclusive first video review and Canon produced-footage from the Canon 7D Mark II, which should be of particular interest to action photogs:

Check out the Canon's full press release of the 7D Mark II on Page Two!

MELVILLE, N.Y., September 15, 2014 - Canon U.S.A., Inc., a leader in digital imaging solutions, is proud to introduce the EOS 7D Mark II Digital SLR camera, incorporating professional features and quality in an affordable DSLR. Building upon the proven success of the EOS 7D camera, this new EOS model features a range of "EOS firsts" such as Dual DIGIC 6 Image Processors for superb image quality and rapid burst shooting up to 10 frames per second (fps), as well as Canon's first 65-Point* All Cross Type autofocus (AF) system for compositional freedom and accurate, spot-on fast focus. Great for shooting indoor activities such as sporting events, concerts, or weddings, the camera's impressive low-light shooting capabilities along with its up-to-10 fps high-speed shooting can capture a fast-break basketball dunk, a band's encore performance, a bird in flight or wildlife in exceptional quality. In addition, the EOS 7D Mark II is the second EOS DSLR camera to incorporate Canon's innovative Dual Pixel CMOS AF system for rapid and precise focusing of video as well as still images.

"With more processing power than any other EOS camera available today, the highly anticipated EOS 7D Mark II camera has everything serious photographers have come to expect from Canon's DSLRs and more," said Yuichi Ishizuka, president and COO, Canon U.S.A., Inc. "And, recognizing that for some, creative expression may expand beyond still photography, we continue to support these creative passions by offering new and innovative Full HD video capabilities, such as second generation Dual Pixel CMOS AF technology in the EOS 7D Mark II camera as well."

The camera's improved EOS Scene Detection system features a new 150,000-pixel RGB+IR 252-zone metering sensor for enhanced precision. The wide-area 65-point AF array combined with EOS iTR and adjustable high-speed continuous burst shooting up to 10 fps enables the easy tracking and capturing of fast moving subjects virtually anywhere in the frame such as birds in flight or running backs eluding a tackle. A new and innovative AF Area Selection Lever nestled around the multi-controller on the back of the camera makes it easier than ever for photographers to switch between the seven supplied AF Point Selection modes without removing their eye from the viewfinder.

The EOS 7D Mark II camera's advanced AE system can detect and compensate for flickering light sources such as sodium vapor lamps that are often used in gymnasiums and indoor swimming pools. When enabled, this system automatically adjusts shutter release timing to help reduce disparities in exposure and color especially during continuous shooting.

Photographers and cinematographers will appreciate improved custom controls including a built-in intervalometer and bulb timer, also EOS DSLR firsts, to enable the capture of time-lapse images and long- exposure images. These features are ideal for recording fireworks, star trails, sunrises and more.

In addition to optional settings for Peripheral Illumination Correction and Chromatic Aberration Correction, found in other current high-end EOS models, the EOS 7D Mark II camera, for the first time, adds Distortion Correction that operates with most EF and EF-S lenses to improve image quality even further while recording video and in-camera JPEGs. The My Menu feature has also been improved with the ability to store more user-selected settings in five additional tabs.

A new and improved Intelligent Viewfinder provides approximately one hundred percent field of view, while adding the ability to superimpose a customizable selection of camera settings data such as dual-mode electronic level display, grid, exposure mode, white balance mode and AF mode. A bright, three-inch Clear View II LCD monitor (approximately 1,040,000 dots) on the back of the camera displays information and menus clearly even in bright sunlight. The EOS 7D Mark II camera is compatible with interchangeable focusing screens including the standard Eh-A as well as the optional Eh-S Super Precision Matte for use during manual focusing with large aperture lenses.

A built-in GPSiv Receiver provides a digital compass and can record location information including longitude, latitude, elevation, camera direction and universal coordinated time (UTC) as EXIF data for geotagging both images and movie files in real time. The built-in pop-up flash is convenient for many applications and can also act as an optical controller with compatible off-camera EX-series Speedlites for enhanced pro-quality lighting effects.

The EOS 7D Mark II camera features dual card slots for SD/SDHC/SDXC and CF memory cards, including Ultra High Speed (UHS-1) SD cards. Data transfer speeds from the camera to a personal computer are enhanced with the addition of a SuperSpeed USB 3.0 port.

Canon's Stepping Motor (STM) lenses, such as the EF-S 18-135mm f/3.5-5.6 IS STM lens, significantly reduce focus motor noise, letting the EOS 7D Mark II camera's built-in microphone capture clear audio of the scene being shot without picking up unwanted noise from the lens. The EOS 7 D Mark II camera also features a stereo microphone port and outputs stereo audio via the camera's mini-HDMI port. The EOS 7D Mark II Digital SLR camera is equipped with a headphone jack for real-time audio monitoring, as well as a silent control feature that allows users to adjust audio levels during recordings. Other built-in ports include a PC socket for external flash units and an N3 socket for dedicated Canon wired remote control accessoriesv. A cable protector is provided to maximize safety when using the USB 3.0 and mini-HDMI ports.

The EOS 7D Mark II Digital SLR camera is scheduled to be available through authorized Canon dealers in November 2014 for an estimated retail price of $1,799.00 for the body only and $2,149.00 bundled with an EF-S 18-135mm f/3.5-5.6 IS STM lens. It will utilize a new LP-E6N lithium ion battery pack with increased storage capacity. The LP-E6N is fully compatible with the LC-E6 battery charger, which will be supplied as a standard item in all EOS 7D Mark II body only and zoom lens kits. Also scheduled to be available are the new optional Battery Grip BG-E16 and optional Wireless File Transmitter WFT-E7A Version 2, with shipping dates and estimated retail pricing to be announced at a later date. Both the EOS 7D Mark II camera and Battery Grip BG-E16 are backwards-compatible to the current LP-E6 lithium ion battery pack.