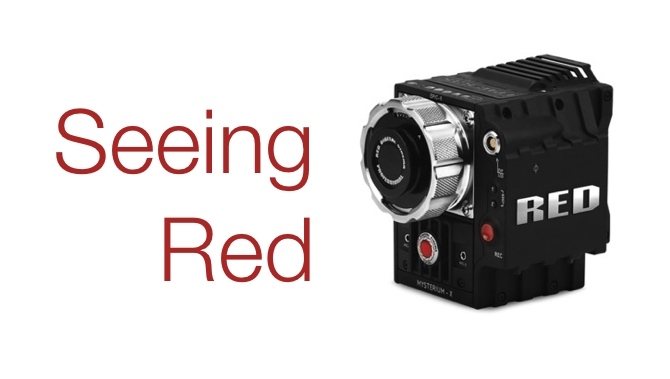 There's always a moment when the harsh nature of reality is crystallised; when however hard you try, you can't pretend any more that things are OK.  For most people, this type of thing happens when they get their first credit card bill after Christmas. For Red, one imagines, their corporate hearts stopped for a moment last Tuesday, 30th October, when Sony revealed the scale of their new camera ecosystem.

This was not a trivial announcement for anyone in the business of digital cinematography, and you can only imagine the fevered conversations round boardroom tables for all high quality camcorder manufacturers as soon as the news was out.

Sony hasn't announced any prices yet, but there's a persistent rumour that they will be lower than expected.

None of which makes Red's task any easier.

Polished as ever with their marketing and communications, Red's announcement had the positive-ist of positive spins on it, that because of massive efficiencies in their manufacturing and supply chain, they're able to make dramatic price drops, with immediate effect. This is probably true, but it is the timing that suggests this was a reaction - and not one that could have waited - to pre-empt Sony's pricing announcement.

For all their communications skills, very little is really known about Red. They've always wanted this. Calling their sensor "Mysterium" is a subtle hint that they like to keep their cards close to their chest.

The mystery about sensors

And what about those sensors?

In the early days of Red, there were rumours about where these amazingly high resolution sensors came from. Some of the saner ones talked Israeli spy satellites. Some, only slightly less sane, suggested alien artefacts from Area 51. In reality they clearly come from a 3rd party manufacturer as it is prohibitively expensive for start-up companies to make their own sensors. (It's a huge undertaking even if you're Sony).

All of which was brilliant at stirring up the frenzy that helped push Red right to the forefront of digital cinematography. Whatever anyone says about hype and deferred delivery dates, the Red phenomenon has rocked the industry - and raised the standards in digital video as a medium for cinematography across the board.

But the pace of technology sets its own agenda. It doesn't wait for anyone, especially when there are established, competing companies who are consummate developers of imaging technology.

What's happened over the last few years - probably since the very first day that the Red One was announced - is that companies like Canon and Sony have been developing their answer to Red's challenge.

And the fact that it has happened over an extended period means that when the products were finally ready, were really, really good.

Sony and Canon make extremely good sensors. They both have decades of experience with imaging. So when they go for a market segment, they do it seriously.

So, yes, Red might have had a big head start, but this was always going to happen.

We are still working on RedShark's comments system. Meanwhile, if you'd like to respond to this article, please write to editor@redsharknews.com. We'll print the best comments.