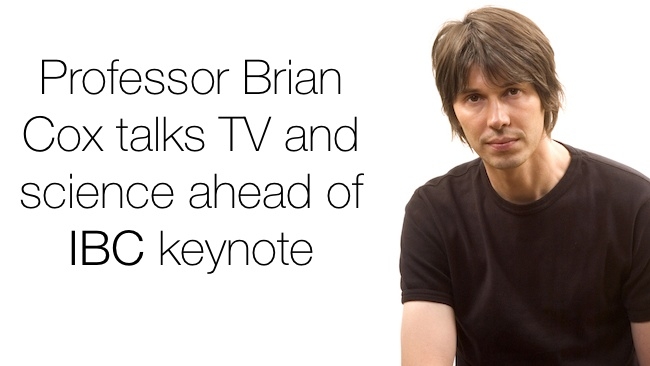 Red Shark European Editor, Andy Stout, recently interviewed award-winning science broadcaster Professor Brian Cox on behalf of IBC in the run-up to his keynote session at the IBC Conference, ‘Television’s Expanding Universe’. Some of what he said was fascinating.

If you haven’t been lucky enough to come across Professor Brian Cox and his programmes such as Wonders of the Universe before, then suffice to say that he’s one of the brightest lights in a new generation of science broadcasters. Passionate about using television as a means of educating the public about science issues, his programmes are intelligent and engaging with some suitably out of this world production values.

He walks the walk too, being Professor of Particle Physics at Manchester University and a key part of the ATLAS and CERN Large Hadron Collider projects.

Rights issues — yes, they happen to us too — mean that we can’t publish Andy’s interview in full, but here’s an excerpt:

Q: One of the most notable sections of Cosmos saw Neil deGrasse Tyson talking about the ‘controversial’ subject of climate change. Does making programming with co-production money inevitably mean you have to allow for fundamentally anti-science attitudes?

A: No. There can be no compromise in the presentation of science. Science represents our best view of a given subject area or question at any given time. The consensus shifts of course, as new data and understanding become available - this is the origin of the power of science - but this does not mean that all knowledge is “controversial”. It would be idiocy to allow a TV executive to nuance a scientific statement to appease sections of the audience. It would undermine the very foundations of our civilisation in fact, and I would not allow some fool armed with a skinny latte and the results from a focus group to do that!

Q: Where lie the main difficulties in engaging the modern television audience with science?

A: In the heads of some in the television industry.