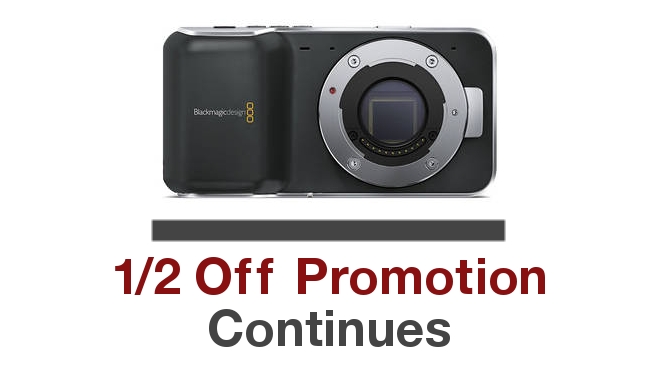 There seems to be some confusion regarding Blackmagic's promotion of the Pocket Cinema Camera at $495, with some outlets reporting its abrupt ending, just one week after launch. We asked Blackmagic for clarification.

One week ago, we ran an article on the Blackmagic Pocket Camera's surprise 50% price drop to $495 USD. Blackmagic announced the Summer Special as a limited time promotion, with a hard end date of August 31, 2014, or as resellers' supplies last...

Today, we were admittedly taken aback by reports that Blackmagic ended this promotion. Or did it?

The confusion stems from a recent blog post on Camaralia, a Spanish professional video and audio equipment dealer's site, and subsequently reported elsewhere. Here is the post by writer Manuel Jose Boza, translated from Spanish (thanks, Google):

Well ... so if it sounds like ... 5 days after launch promotion Blackmagic Pocket 395 euros Australian brand has withdrawn the offer. Since this morning we can not ask or sell more cameras at this price.

All orders previously made will be provided as soon as we deliver the Pocket.

UPDATE (11:05 am): We have just received official communication from the importer in Spain

Blackmagic terminated the special promotion on Blackmagic Pocket Cinema Camera, and does not accept any order more. Therefore the price becomes € 795 again.

Meanwhile, a visit to large resellers B&H and Adorama shows that, as of this writing, the promotion continues.

So, what's going on?

After asking Blackmagic for comment, here's the lowdown from a Blackmagic representative: "The limited availability Pocket Cinema Camera Sales offer has been allocated for our channel partners worldwide, and will remain available for purchase as long as inventory is available from our resellers."

What this means is that, potentially, different "channel partners" will deplete their "allocations" at different times, so in effect, the actual promotional period is very fluid. While it's surprising that the promotion has effectively ended for some resellers, just one week after launch, if any channel partner acted as a supply hub for smaller dealers, then it makes perfect sense that its involvement with the promotion would have ended sooner as opposed to later.

All of which means that if you haven't ordered your $495 Blackmagic Pocket Cinema Camera yet, the promotion continues so you still have time. But if you wait too long, you may not be able to purchase the camera from your preferred reseller.