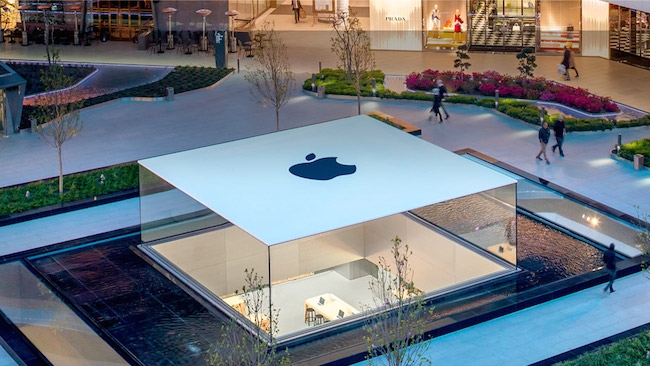 Every four months, all the rumours and speculation around Apple momentarily pause as the company reports its quarterly earnings. Whatever the corporate spin or trendy market analyst theories, CEO, Tim Cook, and CFO, Luca Maestri, turn up to take questions on the cold, hard numbers. By K Stewart.

Overall, Q3 was very, very good with a profit of $7.7 billion (up from $6.9 billion in the same period a year ago) and $37.4 billion in revenue (up from $35.4 billion). Impressive iPhone and Mac sales were the key drivers of success, with profits considerably above Wall Street expectations and revenues only slightly below.

Once again iPad stood exposed by the numbers — after years of spectacular, unprecedented growth there’s no disguising the fact it again under-performed according to Wall Street expectations, although Tim Cook insisted it was in-line with Apple’s own estimates. 13.3 million sales was down on 14.6m in the year ago quarter and below Wall St expectations of 14.4m.

Pressed to explain iPad performance, Cook said the market had bifurcated with incredible growth in BRIC countries, but much weaker growth in established markets such as the US. Cook admitted the latter indicates his expectation that tablets will surpass PC sales is stalling. In higher education, the MacBook’s strength perfectly illustrates people may be switching from Microsoft PCs to Apple PCs, but not yet to iPads.

In the last quarter, Cook praised Microsoft for (finally) bringing Office to iPad. This quarter, he suggested iPad wasn’t doing as well as it could in the enterprise due to ports of desktop apps rather than pure tablet developed apps. The recent enterprise-focused deal with IBM includes 100 custom iOS apps.

iPad has tremendous penetration in top 500 companies, but it augments a PC or performs specialist mobile roles more than it replaces PCs. Whether IBM has the software skills to change that remains to be seen, however money aside the idea of IBM taking back the business market it lost to Microsoft in the IBM PC/Windows debacle must be a considerable motivating factor.

iPad Pro rumours have largely abated this year as production chain leaks indicate a predictable iPad Air S-type update, the same form factor but with a CPU/GPU upgrade plus Touch ID. The iPad mini (Retina) will likely slim down. Can this alone restart the iPad’s previous growth rate? It seems doubtful, but Cook remains dedicated to the bolder iPad vision and promised innovations in hardware, software and services.

iOS 8 is of course already packed with features to make productivity easier, particularly how information can move between non-Apple apps, but IBM may be the unexpected lynch pin of an iPad Pro concept for 2015. However much Microsoft CEO, Satya Nadella, talks about the cloud and services, the company is still iterating on Surface and no-one questions where the best Office experience is today.

While Apple looks for a magic bullet of technical innovation to get iPad on track, the 2008 design MacBook Air with a minor bump to last year’s specs and the resolutely non-Retina screen is turning in a stellar performance — celebrated by an entertaining new ad spot that focuses on… well, stickers. The entertaining ad seems to feature real (weathered) MacBooks and even (briefly) the old six-coloured Apple logo to simply stress how popular, how loved this design has become.

The overall strength of Mac sales in this context is remarkable. In 33 of the last 34 quarters, the Mac’s share of the PC market has grown. Specifically for this quarter, that meant 4.4 million Macs sold, up from 3.8 million in the same quarter last year, and significantly exceeding analysts’ expectations of about 3.9 million.

The strength of the Mac is particularly reassuring given the recent announcement of Aperture’s end of life. As with Final Cut Pro, the new Yosemite Photos App will strip away features to provide an advanced new core app that may progressively restore advanced features. Whether the new consumer-oriented app becomes professional grade isn’t yet clear, but at least the handling of the announcement was leagues ahead of the abrupt FCP7 discontinuation. Tim Cook’s Apple has yet to be as exciting as under Steve Jobs, but for professionals it’s evolving into a better partner for business at least. While FCP7 disappeared from sale the moment FCPX was announced, Aperture is still available, will be upgraded to work with Yosemite and there was comprehensive PR to reassure professionals FCPX isn’t going anywhere.

The 5S with an unchanged form factor, plus the under-exploited Touch ID and desktop grade CPU (that is still to be really pushed), partnered with the plastic bodied 5C didn’t wow too many people last year. And yet Apple still sold 35.2 million iPhones, up from 31.2 million in same period a year ago and just a shade under market expectations of 36 million. By contrast, Samsung has, of course, recently reported a 24% drop in operating profits due to increased market competition. The iPhone numbers underwrite a surging share price for Apple over the past few months as Wall Street anticipates the impact of a large screen iPhone 6.

The iPhone still accounts for well over half Apple’s revenues. A huge proportion of the overall mobile market’s profits and incentive to keep up the pace on innovation. A sapphire screen is widely expected, plus maybe Sony's Exmor IMX220 13-megapixel 1/2.3” sensor for the camera.

Seven months into 2014 and the strongest Apple line-up Eddy Cue has ever seen is still waiting to be revealed. The large screen iPhone is such a certainty that Samsung are already advertising against its arrival. iPad Air 2 parts are on the Internet. iWatch isn’t leaking yet and will likely be end of 2014 at best and, given all the luxury watch employees Apple’s recruiting, seems certain to have a premium model. Apple TV’s refresh will likely be timed with the iPhone refresh while the Macs keep waiting (and waiting) on Intel. Broadwell seems to be slipping into 2015, likely taking with it the fan-less 12-inch retina Macbook concept we keep hearing about.

However, yesterday Intel announced speed-bump updates of the i5/i7 Haswell CPUs that should mean a MacBook Pro Retina update similar to the Macbook Air refresh earlier this year. A similar price drop would be welcome, of course, but seems unlikely given the need to differentiate Air and Retina models. What’s beyond doubt, is that for Apple to live up to Cue’s words, from September onwards there needs to be plenty of announcements out of Cupertino.