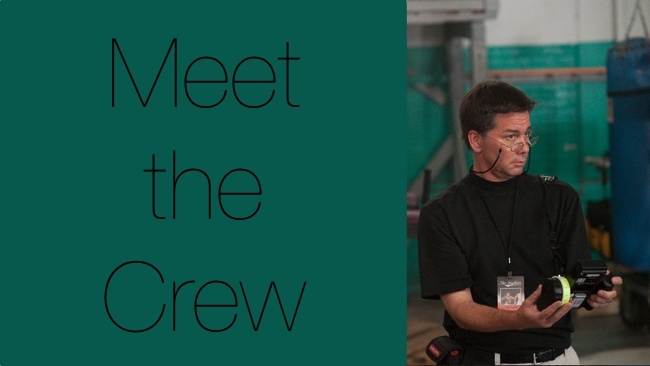 Red Shark starts a new series of profiles talking to professionals in the industry about their jobs and careers, beginning with highly-regarded first assistant cameraman, Gregory Irwin.

Anyone unfamiliar with the film industry might be forgiven for assuming that the word “assistant” in a job title might imply a junior position - perhaps someone learning the ropes, or at least without significant managerial responsibility. Someone making that sort of assumption might not have met some of the highly experienced camera assistants who work at every level of film and television. They certainly wouldn't have met Gregory Irwin, a first assistant cameraman whose experience is replete with some of the best-known blockbusters of the last couple of decades, from Starship Troopers, Pearl Harbor and the Bad Boys series, through Fight Club, to major upcoming films such as Christopher Nolan's Interstellar.

On one hand, the duties of a 1st AC are well-defined. Irwin tells hair-raising stories of shots on the fifth Fast and Furious movie wherein a 250mm lens was used on a Libra head to photograph Vin Diesel leaping across a rooftop. To anyone of even the slightest experience, it's clear that this was an exceptionally taxing situation for a focus puller, but at that level the expectation is that takes will be sharply focussed from beginning to end. Despite the high levels of both ability and expectation, though, Irwin is anxious to emphasise that showbusiness is, as the name suggests, a business.

“I thought, do I want to have a good career or be a starving artist,” he says of formative years that included two degrees: one in film, and one in business, the result of a deal made with parents willing to fund a dream but perhaps anxious also for a practical approach to achieving it. Originally aiming to become a cinematographer, Irwin has only a single credit in the role, on the ‘80s horror movie Terrorgram that he describes as “a way-after-film-school reunion – the entire crew were film school colleagues”.

Now, Irwin describes his job as “managing large camera departments on large feature films... a group of people who have worked together for over 25 years.”

These are large departments, with a dozen or more core members – anywhere from “three to 40 cameras strong”, as he puts it. Quite apart from keeping camera equipment in order and shots in focus, on a typical production Irwin is running a department of roughly 26 people, including first and second ACs, operators, digital loaders and utilities people.

Nolan's Interstellar shot all over the world, and despite the director's preference for single-camera working, the logistics workload is also extreme, with up to eight different configurations of camera equipment available for use at any one time. Filmmaking is famously a team sport, and as Irwin puts it, “the team members take the weight off my shoulders, so I can be with the filmmakers, coordinating information and logistics.”

Hanging on to film at the top end

“The studios were hanging onto film because it was the preferred medium,” is his response to queries about changes in the industry. While the film-to-digital changeover – still in progress, at every level – is a well-aired subject, the degree of specialisation at these levels makes change all the more difficult to deal with.

“It was like learning Russian,” says Irwin. “There was a fear factor. We're old film guys. What's interesting is that we're having trouble with the younger generation of our craft; having trouble finding people who understand film — the loader position is a dying breed. You hire young people who are digital loaders and they've never even seen a film magazine.”

This is a warning perhaps to newcomers to the industry that the high end is still willing to indulge a director's preference for photochemical acquisition when the choice of format represents such a vanishingly small proportion of a big movie's budget. With companies like Cooke producing new anamorphic lens sets, the need for it is clearly still recognised. But ultimately, Irwin sees digital acquisition as a positive. "I like it. I like the fact you can see what you get, especially focus pulling.,” he says. “And beyond running the crew, I'm still the A-camera focus puller.”

At these levels, it's important too that the mechanism of a camera department remains well-oiled. The etiquette of a film set, expressed with ease by crews of such long association and great experience, is easy to mistake.

“I had a great experience with John Alcott BSC when I was 20 years old — very young, inexperienced — long hair, wearing a T-shirt. I was AC, loader, everything, working pretty hard, busy all the time. He was watching me hard, making me very nervous. He called me over, said:

‘Gregory, what department are you in?’

‘That's right. You are in the camera department, can I suggest you get a haircut and put on a collared shirt. If you want to keep looking like that, join the grips.’”

Fast and Furious - and smart

Having donned a collared shirt, Irwin then spent the next thirty years in the camera department amassing a truly intimidating credit list. The most recent, a current project, is the seventh Fast and Furious film, production of which was tragically interrupted by the death of lead actor Paul Walker in a 2013 car accident.

Now slated for release in 2015, the use of CGI to enable production of the late actor's scenes was inevitable, adding a few weeks to the original 84-day schedule. Shooting is underway at the time of writing, with Walker's brothers performing as body doubles, a reassuring indication of the production's intention, as Irwin puts it, to “finish the film in Paul's spirit.”

Sad as it is, it's difficult to imagine an enthusiastic professional like Walker objecting to the efforts being made in his memory, and the results will be keenly anticipated by both technical and creative observers.

With generous crewing plus the time and equipment to get things right, one thing we can learn from the experience of people like Gregory Irwin is why it's hard for independent and low-budget movies, which are nonetheless compared constantly to Hollywood's best-funded output, to really compete. Productions of this scale struggle, even, to find sufficient matched lens sets for multi-camera scenes such as the principal action sequence in Pearl Harbor, possibly one of the largest-scale examples of its type ever photographed, let alone the exigencies of actually managing a shoot like that.

“Camera has more of a discipline than other departments,” says Irwin. “You have an enormous responsibility compared to other crafts — not to demean them, but we're carrying the centrepiece of the process.”