CNN: Stuck in the middle 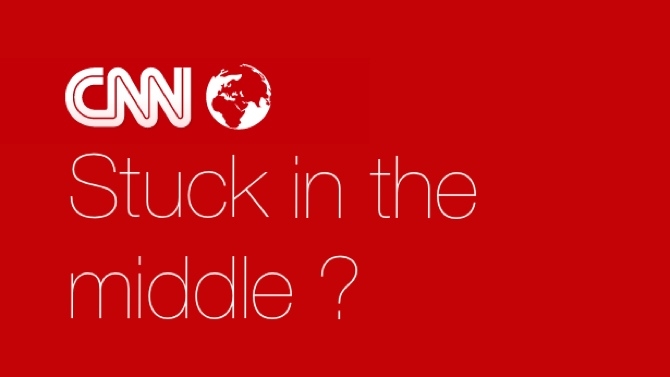 CNN - Stuck in the middle?

CNN announces the formation of a documentary film unit. Will the cable news outlet’s rush to ‘narrative nonfiction’ cause a tumble down the slippery slope of reality programming?

CNN, the one-time-king of cable journalism, has fallen on hard times. The days when CNN dominated broadcast news seem like a distant memory. FoxNews was the first upstart to chip away at CNN’s market share, starting slowly in 1996 before exploding nationally as a force during the run-up to the 2000 U.S. Presidential Election. The new competitor positioned itself at the far-right of American politics, nabbing scores of conservatives who had grown weary of CNN’s middle-of-the-road approach to news. MSNBC followed suit in the mid-2000s, developing a network-wide tone that appealed to the liberals and progressives. With growing competition from the left and right, coupled with the mass shift of news consumption from broadcast to online sources, CNN faced stiff challenges to keep its audience.

A quick peek at recent numbers highlights CNN’s problem. Compared to the third quarter of last year, CNN experienced a 18% drop in total viewers (Total Day) in Q3 of 2012, along with a 9% drop in Primetime ratings. The plummeting numbers are particularly vexing considering that its election season, which typically represents a boon for news broadcasters. Indeed, both FoxNews and MSNBC have opened up huge leads against CNN’s waning support. Americans still have an insatiable appetite for news, but increasingly want that content framed in political and social perspectives that resemble their own, or accessible on their own terms. That leaves a smaller piece of the pie for a traditional cable news outfit that prides itself on impartiality.

Taking refuge in the center

Instead of moving to the left or right, CNN continues to tack the center course, but a recent announcement speaks to a change in strategy. Under the banner of CNN Films, the network will acquire and commission feature documentary content to air on cable and push out to web and mobile platforms. Narrated by Meryl Streep and Selena Gomez, Girl Rising, a doc about educating girls in locales such as Egypt and Cambodia, will be CNN Films’ debut on-air feature. In addition, the network aims to cast such offerings as broadcast events, sticking to a schedule of 3-4 films a year to start, each buoyed by themed promotions, featurettes, and segments during regular programming.

While manufacturing broadcast events is nothing new for CNN, as evidenced by its In America series, its this increased emphasis on ‘narrative nonfiction’ that recasts the debate surrounding the network. The question is no longer ‘right, middle, or left’, but rather ‘highbrow or lowbrow’. Of course, the first salvo of documentary content will reflect CNN’s current standards and tastes. Don’t expect much muckraking or tabloid-style coverage in the beginning. If the CNN Films initiative sees early success, don’t expect much to change at all, besides the inclusion of a few more broadcast specials each year.

However, what if CNN Films can’t overcome its parent network’s misfortunes? What if the money spent doesn’t equate to increased viewership? What if the public really doesn’t want highbrow narrative nonfiction content? There’s a reason basic cable broadcasts often trend to the lowest common denominator; it’s because lowbrow programming gets eyeballs. I’m not suggesting that CNN, in its current incarnation, is actively pursuing the next Keeping Up With the Kardashians or Here Comes Honey Boo-Boo. But if the network can’t halt its current ratings freefall, it may become necessary for the higher-ups to dramatically revamp their approach, courting controversy at the expense of journalistic integrity, or greatly expand their definition of ‘news’ to include reality television-fare.

In either case, CNN Films could be the engine for the network’s future, a means of navigating the narrowing straits of the American partisan divide. In order for the network to survive without taking sides, it must present news content in a way that’s palatable and engaging regardless of political affiliation. But it may lose its soul in the process.