Don't assume that every video glitch is an alien spacecraft... 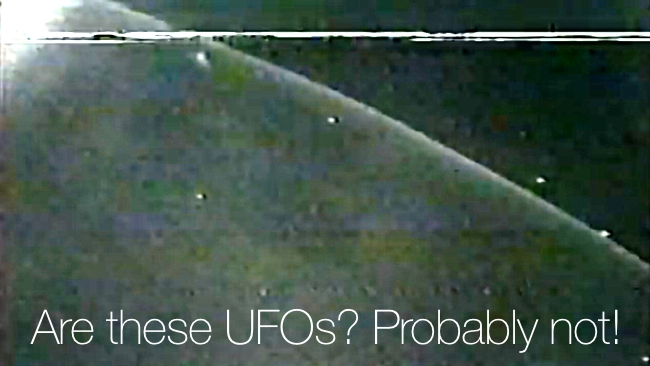 Are these UFOs? Probably not.

A blurry, black and white, indistinct video doesn't prove anything. Still less that we're being visited by aliens! Another chance to see this article about dust in space.

Video is good evidence, right? I mean, if you can see it, it must have happened, surely!

Well, perhaps. Unless you're talking about old, blurry, black and white videos, supposedly of UFOs taken from space, but which could equally be dust particles or strange types of lightening - or just something, you know, unidentified!

I followed a Facebook link the other day and ended up looking at this video. It's supposedly proof of UFO activity, spotted from a NASA Shuttle in 1991.

Yet, it's about as unconvincing as every other piece of "evidence" that I've seen for UFOs.

Just to make it clear: I'm not against the idea of other life forms in the universe. It's quite possible. What's impossible is to say how likely it is, except that with all the other galaxies out there, each containing billions of stars, it wouldn't be surprising if there was at least a moss, fern or jellyfish out there, somewhere.

But whether that jellyfish would be able to cross inter-galactic space without resorting to worm holes or alternative galaxies is another matter.

If an alien civilisation were able to make such journeys, would we even be able to see or detect them?

So, even if they were here, I doubt that they would be flying around in hoverdisks. They're more likely to be phasing in and out of another dimension, whatever that might mean.

The bottom line, for me, is that whenever we see an unidentified flying object, it is basically just that: unidentified. Just because we don't know what it is there is no more reason to think it's alien than we do when we find something unusual in our bath.

That doesn't stop woo practitioners claiming "proof" every time they see a movement in the animated pondwater that is VHS recording quality, or a flashing light in the sky, or a shadow in the woods.

Don't forget that when you see things from space, you're viewing them from an unusual angle, at an unusual scale, in unusual lighting, in an unusual context: not exactly a reliable frame of reference, then. Even the perspective can be confusing. Without a solid perceptual framework, you don't know whether something's the size of a fly and ten feet away, or the size of Basingstoke, and three hundred miles away. All sorts of things have been seen on Earth, the Moon and other planets that have looked like Elvis or a World War II bomber,  but only because we're seeing whatever they are orthogonally (ie from a perpendicular perspective) and in harsh sunlight and normally right at the limit of resolution of whatever optical/electrical/digital equipment is being used.

Whatever these things are, surely, in view of the fact that there has never been clear, scientific-strength, proof of alien visits, ever, wouldn't it be better to call them "unidentified" and be satisfied with that?

Watch this video, and let me know what you think. To me, these just look like particles of debris that have been caught up in a jet blast, probably from a small engine designed to stabilise the shuttle.