The RedShark interview with Grant Petty, CEO of Blackmagic 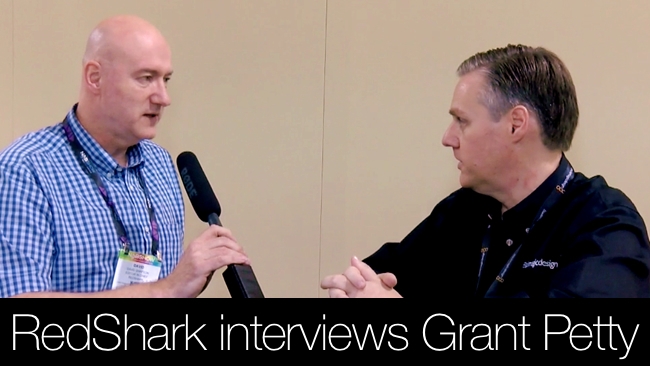 He's the CEO of the most talked-about company in the industry. His NAB booth is the size of an airport terminal. He doesn't give many interviews. How does the mind behind Blackmagic Design work? Dave Shapton finds out

OK, here it is at last, a little later than we'd hoped for. When we were looking at the footage, we realised that there was some nasty flickering caused by (we assume) using a UK spec camera under American lighting. It's a 50Hz vs a 60 Hz thing. We could have got away with a very short segment but after the full 28 mins of the interview, your brain would have been fried.

So we decided to bring you the audio track on its own.

Just a couple of things:thanks to our friends at Studiotech.tv for shooting this. It wasn't their fault that the lighting wasn't going to co-operate. Secondly: thanks to Grant for talking to us on the same day that he'd made his announcements about the new Studio and Ursa cameras.

Finally: the first part of the interview is about switchers and routers. If you're not into this stuff (but we are - it's good to hear about all the 12G 4K stuff...), skip to 7m 30s, which is where we start talking about cameras.

There's a lot of good stuff in here: the background to the cameras, why Blackmagic bought Resolve, and what Grant Petty thinks about Subscriptions!