Some clues to what's to come in Apple's quarterly results - but what does it all mean? 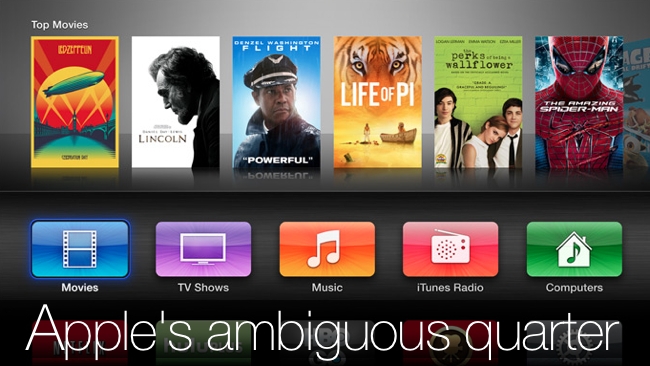 Apple's results are a foggy glimpse into the heart of this giant company. Through the mist you sometimes see the future. K. Stewart explains

A Hollywood studio isn’t a bad analogy for Apple, as Walt Mossberg recently pointed out, with both reliant on fat profits from regular sequels while also investing heavily to find the next mega-hit franchise before the old ones die out.

Looked at from that perspective, Apple’s Q2 FY14 results skewed to its established franchises - the iPhone posted a startling 16.8 percent unit sales increase and even Mac did well, while iPad disappointed - but overall Apple handily beat market expectations and its own upper guidance for this quarter. Specifically, $10.2 billion profit from $45.6 billion revenue and a 39.3% profit margin.

Another flood of cash, basically, but as a reminder of the perils of not innovating sufficiently quickly, the once all-conquering iPod franchise plummeted from 5.63 million units in Q2 FY13 to 2.76 million in Q2 FY14. It now represents just 1.01% of Apple’s total revenue. Apple’s results, and the subsequent earnings call by CEO Tim Cook and incoming CFO Luca Maestri, provided plenty of insight on where the company is now and hints at what’s to come.

And as is now routine on the call, there was an update on the Mac’s growth trend - positive results for 31 of the last 32 quarters. Unfortunately, no-one on the call pressed Tim Cook about the new Mac Pro, which is still in a back-order situation, with a 3-5 week lag on orders for a machine launched back in December 2013. Granted it took iPhone and iPad production years to catch up to market demand, but the Mac Pro is a more niche product with its 4K workflow being the number one sales feature.

Given all the latest news out of NAB around new 4K cameras and updates to existing products, the Mac Pro back order situation could persist for a while…

On the OS X front, just before the earnings call Apple announced a Beta Seed program for OS X for end users - so no longer any need to pay $99 to be a registered developer for beta access. Just sign the NDA and away you go. Given that the (free) iOS7 was likely the most pirated OS in Apple’s history, due to people being desperate to experience the new look before launch, it may be paving the way for similar changes to Mac OS and Apple would sensibly prefer downloads to be from its servers than bittorrent.

In Q2, the iPhone comfortably retained its position as Apple’s most important franchise with a colossal 57% of revenue. Growth is no longer as dramatic as was in the beginning, but 43.72 million units sold compared to 37.43 beat analyst expectations handily.

Sales in China were up 28%, significantly helped by the iPhone 4S being used as an entry-level product. In 2013, all the hype was around a low-cost iPhone that eventually emerged as the only slightly cheaper plastic-bodied 5C. Safe to say that wasn’t a huge hit and the premium priced 5S stole the show with the 4S still performing well. This time around, the supply chain is already leaking larger screen iPhone parts and clued-up Chinese case makers are showing off designs to suit it.

Prior to the Q2 call, rumours had started about a $100 bump in the price of a premium iPhone. Two analysts tried to get Tim Cook to address this issue and in his first answer he played a fairly straight bat, talking about Apple pricing products fairly given their value. Second time around, he was more direct - “we’re not stuck on a certain price point” - so basically don’t expect the familiar iPhone prices to apply this year for the larger screen model.

Apple’s freshest killer franchise faltered in Q2, with a headline drop of 16 percent year-on-year, 16.35 million units compared to 19.48 million, despite the introduction of the iPad Air and iPad mini with Retina screen. Maestri explained that inventory management issues meant that the real decline was closer to 3 percent and results were at the high end of Apple’s own expectations, but it’s still a decline and as iPad is Apple’s second biggest franchise at 16% of revenue, concerning.

Easily Tim Cook’s longest answer in the entire call was in response to an iPad question where he took the opportunity to provide a fairly comprehensive overview of its existing situation (no. 1 in consumer, enterprise and education) and its potential. The most interesting part of his answer was his conclusion; “the iPad has a great future. The thing that drives us, more than anything else, is what comes next… the next iPads, if you will, the things that are in the pipeline, the things that we can do to make the product even better.”

To a large degree, the iPad Air felt like the ultimate refinement of Steve Job’s original vision of the iPad. A ridiculously powerful chipset, a gorgeous Retina-display and that ultra-slim, lightweight profile - truly magical engineering, particularly to those with an iPad 3 or 4 where Retina equalled uncomfortable weight gain. And all of that duplicated, but somehow smaller, in iPad mini with Retina.

Yet just five months after their introduction, this elegant refinement of the iPad concept hasn’t sparked a new growth phase. Tim Cook acknowledged this and hinted at much more to come. Does that mean anything more than the addition of Touch ID, an even thinner ‘in-cell’ display and chipset improvements?

We don’t expect much more than this in 2014, not in hardware terms with the abatement of iPad Pro rumours, but an iPad-specific, lightweight Apple keyboard aside, the key issue with iPad is more to do with software than hardware.

Industry pundit, and former head of Apple’s Mac division, Jean-Louis Gassée recently pointed to the difficulties of doing professional work on a machine with no easily accessible file-system. However well it suits newbie consumers, it’s a limitation for professional use. If anything, it's now working better for competitors such as Microsoft and Google, as both now promote products with closed, cloud-based eco-systems on iPad.

Microsoft’s answer to these issues for professionals is simple: the misfire of Windows RT aside, Microsoft’s iPad competitor is now basically a slimmed down Windows PC with a touch-friendly interface and 200Gb of OneDrive storage free for 2 year. It’s hardly as radical as iPad but for the enterprise and education market it need not be. After the visual innovation of iOS7, hopefully iOS8 delivers on usability.

It’s customary in finance reporting to say whether the expert report holds stock of the company they’re reporting on. I’m not an expert and I don’t hold stock.

Reasons for the latter include Apple stock previously being pricey, all stocks obviously go up and down, so why risk it? Splitting the stock 7-ways doesn’t seem conventionally justifiable given that the stock is hardly rocketing in value right now. However, bringing the stock down so radically certainly goes a long way to making it more appealing to small investor.

As to the risk factor, that’s always there, but Apple is addressing this in two ways. Firstly, Apple is to buy back another $30 billion of its stock, on top of the $60 billion announced last year. Secondly, Apple increased its dividend by 8 percent and indicated further rises to come - obviously still dependent on the business doing well. Steve Jobs had previously opposed stock splits to avoid volatility in ownership, but Cook clearly feels different. A recurring theme of the investor call was Apple’s perception of its stock being undervalued by Wall Street, hence stock buy-back strategy. In after hours trading, the market briefly agreed and share prices increased by over 7%.

Cook sounded somewhat defensive when pressed on why he’d previously claimed Apple TV was no longer a hobby (he simply re-stated that it brought in over a billion in revenue - hardware and purchases combined) and declined to comment on Amazon’s purchase of older HBO shows for its Apple TV rival.

iTunes and services are Apple’s fourth largest revenue stream, just behind Mac with 10.02 billion in revenue in Q2. Given the poor state of TV sales over Christmas, rumours of an integrated Apple 4K TV have declined but an updated set-top box rumours remain with recent iOS 7.1.1 builds including tags suggesting the addition of Siri for voice control, while Apple’s acquisition of PrimeSense last November opens the door to Kinect-style gesture control. (Anything has to be an improvement on rubber banding the diminutive existing controller to the back of your TV controller.)

Apple TV 3 currently seems set for an Autumn release. Asked about the degree of diversification at Amazon, Facebook and Google, Cook pointed out customers didn’t expect Apple “to be first… we’re in a race to make the best products.” Some of these are nearing completion, but “it’s not the time to pull the string on that curtain.”

To return to the movie studio model, pundit Jan Dawson refined Mossberg’s comparison to point to one studio in particular; Disney and how each part of the empire was designed to support the others. In the past, competitors such as Microsoft and Sony preferred to let divisions act independently to maximise profit and performance. In a holistic view of Apple, it’s clear from content creation (Mac Pro) to distribution (iTunes) to mobile high resolution screens, the next big thing might not be a single product, but the consumer shift to 4K content - potentially sparked in part by Apple TV.