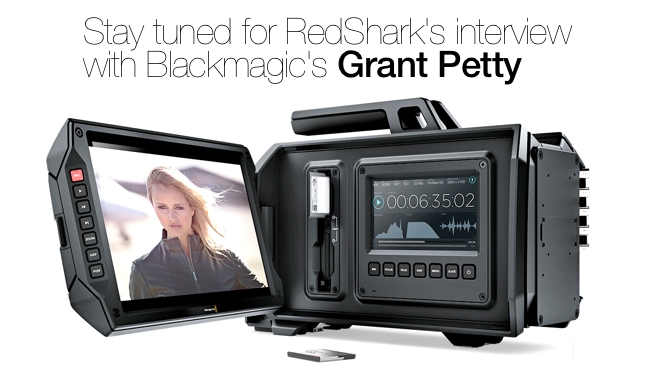 It's very unusual for Grant Petty, CEO of Blackmagic Design, to give press interviews, but on the first day of NAB 2014 - the same day he announced the new Studio Camera and the URSA 4K production camera, we sat down with him and talked across a wide range of subjects.

We were expecting around 20 minutes at the outside and our film crew - our friends from StudioTech - had several other appointments they had to keep.

Well, they missed them, because Grant talked to us for over an hour - well over half of which is in the recording.

I hadn't met Grant before, although I'd seen him several times during press conferences. The one we'd just been to, timed to coincide with the start of the first day of the show, seemed a confident affair, well paced and designed to throw attention not just on the cameras but on the staple Blackmagic products that sell in such huge numbers that they presumably fund the more way-out projects that create such intense interest and speculation in the days before they're announced.

Of course, a good product is greater than the sum of all its parts, and that's what makes companies like Sony so good. Grant has a lot of respect for the "traditional" companies, but that doesn't deter him from breaking new ground in price/performance.

Most of all he wants to make high-end tools available to anyone, and nowhere is this more apparent than with his purchase of DaVinci - the top-end colour corrector that now sells for a tiny fraction of its original price.

While we were talking about DaVinci Resolve, Grand corrected me on one point. I'd always assumed that when Blackmagic bought DaVinci, it was part of a clever and long-term strategy to provide the tools needed to work with the raw output from the Blackmagic cameras. I was wrong - or at least, partly wrong. It turns out that the pure motivation in buying DaVinci (apart, obviously, from the fact that it was a smart business move) was to bring colour correction tools to the masses. Grant's first career was in post production, and he could see how expensive these tools were.

He resolved (did you see what I did there?) to make colour correction tools available to everyone.

We went on to talk about cameras and went into detail that I don't think has been seen in other interviews.

The interview is being edited and we're not sure exactly when we'll be able to link to it - but we'll let you know as soon as we do. It will be in the next few days.