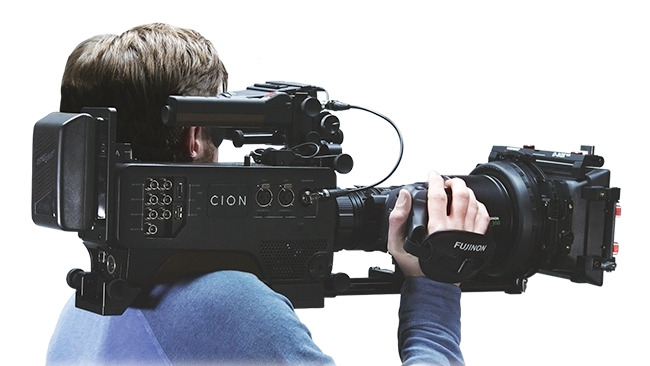 The new Cion camera from AJA was perhaps the biggest surprise of the show. My immediate assumption when I saw it announced at AJA's press breakfast on the Monday of NAB this year was that they had essentially taken a Ki Pro Quad and attached a sensor. It seems I was wrong about this.

For anyone interested in cameras and post production, the two halls at NAB of most interest are always the Lower South and the Central. You can go between them via their front entrances, or via a short cut between the two venues, which connects them side-on. The sun always seems brighter this way, because you go straight out of one air conditioned half mile-long shed, into intense daylight, and then into another dark-seeming hall. Most people do this many times per day and it's the perfect place to bump into people and have impromptu meetings.

And so it was for me as I came across one of the main designers of AJA's Cion camera. I was introduced by RedShark's Phil Rhodes.

In what was a snached conversation (I was in a hurry to another meeting) I asked whether it was true that the Cion was essentially the internals of a Ki Pro Quad mated to a camera sensor.

In development for four years

It's fascinating to hear that the Cion was in development for four years. It suggests that companies like AJA (Blackmagic springs to mind, of course) take a much longer view ahead than we might imagine. And it would be good to know whether Blackmagic's original Cinema Camera took four years to develop. I'd be surprised if it did, because Blackmagic seems to be able to turn products around much faster than that.