Was Tron the most influential film ever made? 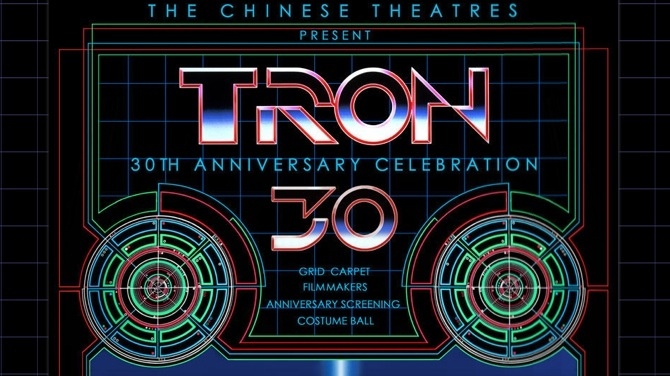 The sci-fi fave celebrates its 30th birthday with a party in Hollywood. And its event producer makes a controversial yet compelling statement.

On October 27th, 2012, costumed characters will overrun Grauman’s Chinese theater. No, it’s not a Halloween haunted house, or a meeting of the superhero performers who regularly stalk the boulevard, patrolling for tourist cash. Instead, party-goers in bright neon will congregate to wish the sci-fi classic Tron a happy 30th birthday.

Organizers went all out for this special event. They ditched the ubiquitous red carpet for a grid carpet, evoking the world of the mainframe. There’s a filmmaker Q&A, a screening of Tron in all its big screen glory, a costume contest judged by the filmmakers, and a party that will last well into the night.

There at the time

The event’s producer, Mike Bonifer, knows a thing or two about Tron. As founder and CEO of GameChangers LLC, Bonifer gravitates to such projects, but this event is more of a labor of love. He worked publicity on the original Tron and has firsthand knowledge of the production, its players, and the atmosphere at Disney circa 1982.

I caught up with Bonifer recently and he explained his unique take on Tron:

“There’s really two ways to look at Tron. One, that it was moderately successful, did so-so at the box office, doing a little better than breaking even, but not anything to write home about. The other way to look at Tron is that it was the most successful movie ever made.

“(My business) does a lot of corporate consulting, using improv techniques to develop productive games for our clients. In doing so, we like to differentiate between objectives and outcomes. Objectives are the clear goals at outset. Outcomes are whatever results from the endeavor. While we work to achieve the objective, we mine the results for positive outcomes that we can use or that inform our actions moving forward. In this example, the objective for Tron was to do well at the box office. It barely cleared that bar. It’s on the outcome side that things get interesting.

"Tron was seen as an experiment"

“Tron is where John Lasseter caught the CG bug. He didn’t work directly on the film, but spent all his time in the animation trailer with Jerry Rees and Bill Kroyer.. At the time, Tron was seen as an experiment, the first feature film to extensively use computer graphics in its production. The traditional cell animators at Disney, sensing a threat, were thrilled with Tron’s lukewarm box office. To them, the experiment was over, and it was a failure.

“Many more ‘failures’ would follow, especially for Lasseter, as technology struggled to keep pace with his imagination. Lasseter and Greg Keane made a test of Where the Wild Things Are, mixing traditional animation with CG backgrounds, crude by today’s standards but groundbreaking for its time. Due to politics at Disney, the Mouse was unwilling to greenlight another CG-dependent feature and Lasseter was promptly fired.

“Some thirty years later, Lasseter is the creative force behind Pixar, whose films have made in excess of $7 billion. Chris Wedge, who was a scene coordinator on Tron, became the ‘Lasseter’ of Blue Sky, the company responsible for the Ice Age movies. There’s another $3 billion in profit. That’s $10 billion that can be traced back to those early days when a small group of animators revelled in the untapped possibilities of computer animation. While Tron didn’t really achieve its objective, can you think of a more fabulous outcome than that?”

Bonifer makes a compelling argument. While it’s impossible to ignore that box office is the de facto measure of a movie’s success, we should place more credence to the long view, to really gauge a film’s impact on the Industry.

If you’ll be in the Los Angeles-area on October 27th, come down to Grauman’s Chinese Theater and toast Tron’s 30th with Bonifer and the filmmakers. Visit www.tron30th.com for more information and to purchase tickets.