How A Talking Racoon Won The Internet 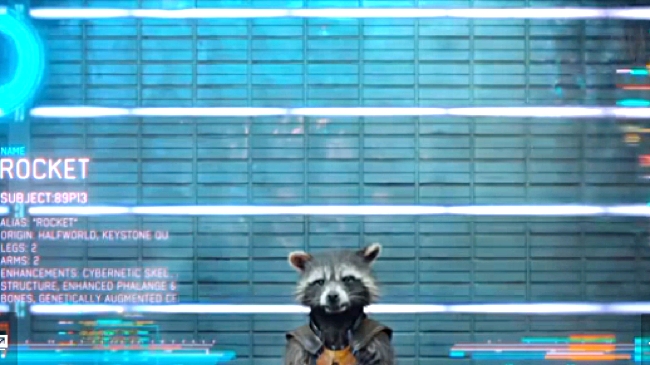 Proof, if it were needed, that Marvel Studio can do no wrong has arrived in the form of the first official trailer for Guardians of the Galaxy. A multi-million dollar adaption of a comic book series few have ever heard of (much less read), with a lead cast devoid of A-list faces – not to mention a writer/director who cut his teeth at non-budget cult label Troma before finding a measure of success scripting the Scooby Doo movies – it’s the kind of project that never gets the greenlight from a movie studio... much less one that’s now part of the conservative Disney empire. And yet it’s already looking likely that Guardians of the Galaxy will not only be one of /the/ blockbuster movies of the year, but maybe even the highest grossing.

Marvel is on to a winner

The trailer and accompanying featurettes – including a brief behind-the-scenes glimpse at creature effects work from Framestore, a studio already in the spotlight thanks to Gravity – go some way to explaining the appeal. But really Marvel was onto a winner the moment studio president Kevin Feige started the drip feed, with the first hint about the possibility of a Guardians movie way back in 2010. With an official announcement following in 2012 and test footage aired at Comic-Con a year later (then handily leaked onto the web), the hype machine has been slowly, steadily building up a mighty head of steam. Even the new trailer holds back enough to leave everyone clamouring for more. Guardians of the Galaxy has clever been transformed from a property nobody knew anything about to the one everyone wants to know all about.

The goodwill conferred by the Marvel brand is also a factor here. Ever since deciding to cut out the middleman and make its own movies, Marvel’s bravery and willingness to put its money where its mouth is has proven immensely likeable. Robert Downey Jr wasn't exactly at the peak of his career when he landed the Iron Man gig, remember. A movie about cape-wearing Norse god Thor should have been a joke, yet Marvel convinced Kenneth Branagh to put a Shakespearian spin on things to great effect. Many questioned the decision to entrust TV stalwart Joss Whedon with its first superhero team movie, yet The Avengers (aka Avengers Assemble) became the third-highest grossing movie of all time, raking in $1.5 billion. If Marvel has faith in a jokey sci-fi romp featuring a smart-alec space pilot, a musclebound mutant, a green-skinned multiple murderer, a talking racoon and a sentient tree then who’s going to argue?

What’s especially interesting is that Marvel is one of a select few large corporations that successfully pitches itself as the underdog (see also Apple and, until recently, Google), despite deep pockets, box office success, and even a Disney buyout in 2009. There’s a perception that Marvel answers only to itself and so is able to take risks, treating its own source material and loyal fanboys with respect. Contrast this with Warner Bros’ nervous handling of its own DC comicbook universe, complete with reboots, cancellations and fan-infuriating casting decisions. As comic-book pundit Brett White succinctly puts it, “DC/WB is all like ‘Wonder Woman's too confusing for a movie!’ and Marvel/Disney is all ‘Here's a raccoon with a machine gun’”.

Fanboys and newbies alike love the fact that Marvel has the guts to thrust something so weird and obscure as Guardians of the Galaxy into the spotlight. This is the lovable mongrel of the litter from the little-studio-that could. Double win.

Video trailer and featurette after the break

0:15 Director James Gunn immediately invites comparisons with Raiders of the Lost Ark, as Peter Quill (the self-styled Star Lord) indulges in a spot of artefact-nabbing.
0:35 A buffed-up Chris Pratt channels his inner Han Solo, with a mix of cockiness and self-deprecation that sets out the movie’s stall, tone-wise.
0:48 A Usual Suspects-style roll-call handily introduces newcomers to the movie’s motley crew, including...
1:00 Rocket Raccoon. No sign of Bradley Cooper’s voice performance here, but Framestore’s digital creature work immediately establishes the psychotic mammal as the movie’s secret weapon.
1:09 Rocket’s bromantic sidekick is Groot, a sentient tree who communicates solely with the phrase ‘I Am Groot’. Voice and motion capture acting are courtesy of Vin Diesel... cue jokes about another wooden performance.
1:35 The Sony Walkman. Quill’s only connection to his home planet (Earth) also handily allows Gunn to set the film’s mood with a somewhat eclectic playlist. When was the last time you saw a sci-fi movie utilise Blue Suede’s ‘Hooked on a Feeling’? (Sales of the song have jumped 700% since its use in the trailer.)
1:46 This generation’s Millennium Falcon?
1:50 And here’s the money shot, with computer generated duo Rocket Raccoon and Groot instigating a bullet-fulled jailbreak.
1:54 Doctor’s Who Karen Gillan, sans hair, as key villain Nebula.
2:00 The combination of humour and upper atmosphere combat recalls Joss Whedon’s cult sci-fi film Serenity (and accompanying TV series Firefly).
2:02 More Rocket Raccoon gunplay, just in case anyone still isn’t sold on this crazy concept.

Marvel gives voice to Rocket Raccoon and offers a glimpse at Framestore’s early visual effects test footage in one of several mini-featurettes.