Apple has much more up its sleeve. Hints at what's coming next 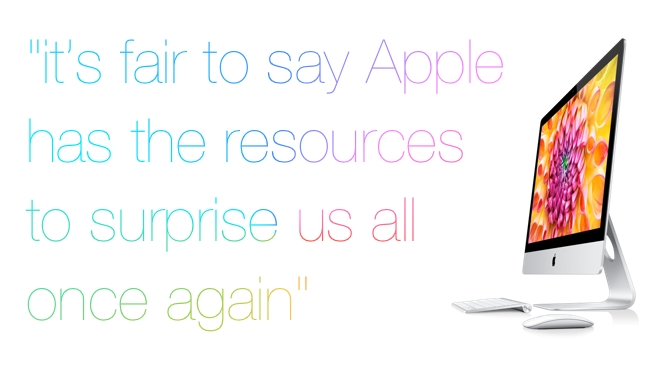 Apple had another record quarter but shares dropped. But according to our in-house Apple anlylist, K. Stewart, there's much more to come from this image-concious giant

30 years, and 3 days, after the Mac debuted on January 24th 1984, Apple posted record first quarter results with $57.6 billion in revenue - up 6% from same quarter last year and at high end of Apple’s guidance. This added up to net quarterly profit of $13.1 billion from record sales for iPhone and iPad, plus strong Mac and software/services performance.

Immediate stock market reception was negative, however, with an 8% fall in after-hours trading primarily reacting to Apple’s guidance for Q2 being lower than expected: $42-44 billion or roughly flat compared to $43.6 billion in Q2 2013 and Wall Street’s $46 billion average estimate.

The markdown is understandable given Wall Street’s focus on short-term growth, but Apple’s product cycle now is all about Q1, its October to January quarter covers the peak holiday buying season for consumers, and all the significant product lines are refreshed like clockwork to hit this season. So these are the figures which matter most.

Despite the growth of Android, iPad sales set a new record of 26 million sales in Q4 compared to 22.86 million - that’s a 14% increase underpinned by a doubling of sales in China.

iPhone similarly shrugged off competition with a new record of 51 million, up 6.72% despite supply constraints on the iPhone 5S and the one week old deal with China Mobile suggests there may be more good news to come, but Wall Street had expected 55 million sales and fretted about why the China deal wasn’t reflected in more aggressive Q2 guidance.

As to the Mac itself, 4.8 million sales showed modest growth compared to 4.06 in Q4 2012, but given that the IDC estimates a 6% fall in the PC market overall this is still remarkable and CFO Peter Oppenheimer pointed to Mac OS gaining share in this market for 30 of the last 31 quarters. He went on to predict another 30 years of Mac OS development, perfectly reflecting Apple’s bullish celebration of the Mac’s 30th birthday and a clear party-line that while iOS and Mac OS should reflect a common underlying approach, ‘it would be a waste of time’ merging them in the way Windows 8 attempts.

Inevitably, CEO Tim Cook was pressed on the ‘innovation cycle of the company’ and the lack of a new product category since iPad. Cook insisted “Innovation is deeply embedded in everybody here, and there’s still so much of the world that is full of very complex products, etc. We have zero issue coming up with things we want to do that we think we can disrupt in a major way.” In response to a related question, Cook confirmed that innovations due in 2014 would be new categories and not simply additions or supporting services for existing categories.

Interestingly, Oppenheimer specifically called out Temple Run 2, Cut The Rope 2 and Plants Vs Zombies 2 as App Store stars with a console-style exclusivity period on iOS. Clumsy Ninja also drew praise as an iOS exclusive. These are hardly next-gen console-killers, but they show Apple’s senior leadership is aware of the importance of games to iOS and strengthen the idea that long-term stand-alone consoles may, like pocket cameras, be pushed to the margins as mobile devices become ‘good enough’ for most people.

That said, the 52% decline in iPod sales shows the lack of updates to the iPod Touch isn’t helping it compete with the under-performing  Nintendo 3DS and Sony PS Vita. A missed opportunity or a deliberate strategy to push younger iOS customers to iPad mini?

As to the future of the iPhone, Cook admitted that has been widely observed, the 5S/5C skew surprised Apple by leaning so much to the more expensive model. Consequently, the iPhone 5C hadn’t acted to ‘remove the pricing umbrella’ of rival products in quite the way Apple expected and iPhone market share dropped in North America from 50% to 43.9% according to Kantar WorldPanel ComTech. Touch ID was specifically called out as something that intrigued people about the 5S and set it apart from the 5C, however Cook resisted the idea of doing anything that wasn’t ‘fantastic’ - meaning a truly low-cost iPhone isn’t imminent, but Touch ID is clearly a hit that Apple is likely to add to more products such as iPad in 2014. Moreover, Tim Cook agreed with analysts that “there’s a lot of opportunity” in Apple offering mobile payments, particularly given how iOS platforms already out performs the competition in conventional online sales.

Apple’s failure to wow Wall Street doesn’t necessarily mean good news for key competitors. Samsung, of course, has just recorded an 18% decline in profits with $7.7 billion revenue on $54.95 billion within which its mobile unit is a key factor. Sony, by contrast, is finally generating some great comeback buzz with impressive XPERIA phones and compact full-frame cameras. However, the mountain it has to climb is underlined by Oppenheimer specifically noting Apple’s strength in the Japanese market (a stunning 68.7% market share thanks in part to the NTT DoCoMo deal) while yesterday Moody’s cut Sony’s credit rating to junk bond status - albeit with ‘stable’ guidance and some positive expectations due to PS4.

In this quarter, the old ‘frenemy' Microsoft has best pleased Wall Street by beating its expectations and earning a 4% jump in after-market share price, due in part to cloud service enterprise sales doubling. Windows Phone overall market share is growing, even though Nokia’s 8.2 million Lumia sales were less than the previous quarter. Nokia isn’t yet the magic bullet Microsoft needs to seriously rival iOS/Android, hence the interest in Sony Mobile Europe head Pierre Perron confirming a Sony VAIO Windows Phone is under discussion with Microsoft.

Overall, Apple’s best ever Q1 results and a new record in revenue for any tech company could only register as a solid performance and Wall Street is hungry for another iPhone/iPad style revolution. We’ve previously speculated on an enterprise/education-oriented iPad Pro, speculation around which shows no signs of abating with NPD Group reporting Google’s Chromebooks grabbed a startling 21% of US laptop sales in 2013. And of course an iWatch, while the 4K heavy focus of the Mac Pro may yet lead to a 4K iTV. With $158 billion in cash, a sequential increase of 12 billion on the previous quarter, it’s fair to say Apple has the resources to surprise us all once again.