Where are the Green PCs? 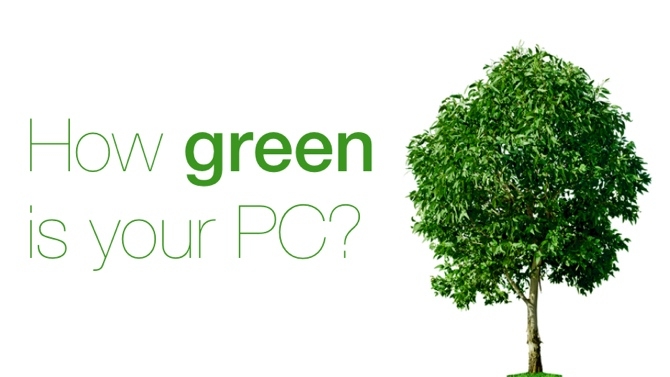 How green is your PC? + Green Tree

Oren Paynton reveals the astonishing statistic that an iPad battery would only power a PC workstation for a little over a minute!

Quite a number of years ago now, the automotive industry caught on to the fact that some effort needed to be put into fuel efficiency, sustainability, and in general – ‘greenness’. I doubt very much that the execs in the boardroom suddenly turned into eco-warriors. It is more likely that the change came as a result of rising fuel costs, increased awareness of the public, and of course, increased government legislation. Somewhere back in the ‘80s, the industry was chucking out massive vehicles without any consideration for efficiency, fuel consumption or emissions. All that mattered was speed and power, and this made for exciting driving at a time when fuel was cheap and environmental awareness was limited to Berkeley, California.

Things have changed though over the last 25 years or so. It is almost cool today to say you can drive to Paris and back on a single tank of diesel, or to tell your friends that your car doesn’t have any horse-powers, but does have some Kilo-Watt-Hours, whilst sipping on your soya latte.

Stuck in the eighties?

The computer industry though, unbelievably, still seems to be stuck in the eighties. How many of us have even a rough clue as to the power consumption of our new computer? What is the annual cost of running a computer? When we upgrade the RAM or replace the hard drive, how much more power does the system use? Computer sales seem to be edging towards half a billion units per year. How many of the old and unloved replaced computers ever get re-cycled? Even a typical ten year-old car will tell you what your average MPG is, but finding out how much power your computer uses still takes a great deal of effort.

Not easy to guage

To be fair, measuring the power consumption of a computer is somewhat more complex than measuring fuel efficiency of a car. To start with, there is a big difference between peak power, maximum power and typical power. There is the efficiency of the power supply itself to take into account, and the rapid variations in power consumption that the measuring device smooths out. The type of software a computer is using (and the amount of data) as well as the ambient temperature and the amount of dust in the case all impact its power consumption. Nevertheless, as customers, I think we have the right to know how hungry our computers really are.

Video editing workstations, and any demanding graphics work – particularly in 3D, use more power than most other systems. Top-end graphics cards can consume upwards of 200W, and that is still excluding the power to run the significant cooling needed to keep them going. The volume and speed of video storage (plus backup and redundancy needs) means more power too, so machines needing, and using, 1200W power supplies are not uncommon. How much of that power is really needed, and how much of the PSU capacity is really used is another question though. None of the big computer manufacturers really give you any useful information about power consumption and even the occasional line of ‘green computing’ products seems to be more a marketing ploy than anything else.

It can be done

Laptops, and more recently tablet computers, have had to cleverly deal with power consumption issues from the very start (with the possible exception of mobile workstations, which have always been a rather strange concept, not being very mobile at all). They are all limited in battery capacity and therefore need to conserve the power they use. The new iPad for example, is a truly marvellous piece of engineering. Its new screen and faster multi-core processor are power hungry though and its battery therefore has some 70% more capacity than the previous model. Even so, if I had a theoretically 100% efficient converter, and bumped the power up to 230 volts, I could run my rather mainstream desktop on it for about 75 seconds, or need 49 iPad batteries to run for just one hour! Somewhat short of the 10 hours the tablet promises. Desktops use heaps of power because it is readily available, it does not tend to run out, and because we do not have the tools to easily monitor how much we are actually using.

It is time for a massive push towards energy savings in desktop computing. Like in the automotive industry, this will not come from manufacturers. It will come from public demand due to rising cost of ownership, and from new industry standards and government legislation. The components to start off with are all there: we have high efficiency power supplies, low power CPUs, better performance/Watt GPUs and of course – solid state drives, all able to transform PCs into better, cleaner machines.