Opinion: is film School Worth it? 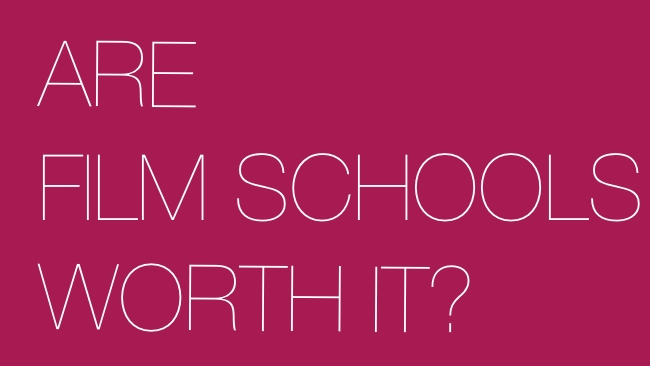 Are film Schools Worth it?

They're expensive, and there's no proof that they help people's careers in film. That's Phil Rhodes' view. Is he right or wrong? Hear him out and then let us have your comments

This one's going to be an exercise in careful diplomacy: is film school worth it?

Anybody who's been even peripherally involved in filmmaking will at some point have been asked for a film school recommendation – often whether to go at all, as much as which one to attend. This is a question nobody can objectively answer, on the basis that nobody can simultaneously have had the experience of both having attended, and not having attended, a film school, but my feeling, based on my experience and that of people I've met, is that it's a huge expense that can often be avoided. I hope there'll be a healthy contribution of comments to this piece that'll reveal what the prevailing opinion is. My main purpose, though, is to  attempt to defend the reader against some of the more extravagant institutions, with the nice campus buildings and the extensive online advertising, which often seem to dangle the glittering carrot of Hollywood then charge huge amounts of money without even the vaguest hint of how useful the course will be.

It's important as well to be clear that my own thoughts apply mainly to the UK, although I suspect they probably make a lot of sense anywhere other than major film markets such as the USA (and very possibly even then, too). Film and TV are brimful of people who didn't do a related degree, or in fact any degree at all, so it's not clear that one is required for any particular position. The benefits of any given course are therefore intangible; you need paperwork to be a medical doctor, but you can – in theory - be an oscar-winning director with no formal education whatsoever. It is therefore the responsibility of the prospective attendee to be sure that the financial outlay involved is at least somewhat likely to be repaid in terms of career prospects. While there are great schools out there – usually with the steepest entry requirements - this repayment is emphatically not a given.

Even in the best case this is difficult because almost anyone who's attended one will agree that the principal benefits of film school, beyond learning technique, are intangible: personal contacts with other  students, at facilities and rental companies, experience behind a camera, and demo reel material.

The thing is, many of these things can also be achieved simply by applying the same money to produce short films. The actual tuition, the inculcation of technique, is therefore of key importance – but it's equally true that being taught lighting by a famous lighting practitioner is not something that will buy anybody a job, so nobody should be starstruck by a well-known name.

It's possible to see the work of film school students all over YouTube and Vimeo, and the ability of a school to have its students produce decent work may be a worthwhile thing to assess. But ultimately it may be – often is – necessary to make enquiries about just how many of the school's students go on to do whatever it is the prospective attendee wants to do. Information on placement and mentoring programs – which can themselves be of variable quality – may be available on a phone call, but very few educational institutions maintain statistics on the absolute success rate of their students – and that, ultimately, is the point at issue.