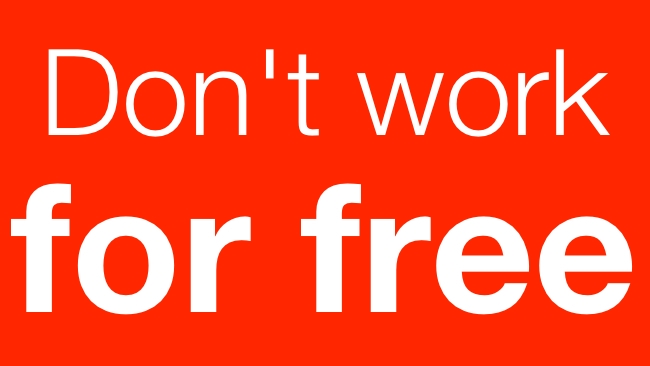 However tempting it might be in the movie and video business, don't work for nothing!

It's very important to be clear exactly what we're talking about here. Situations where established professionals and collaborators of long standing agree to do favours and help one another out on the occasional project are hard to object to, and the concept of a formally agreed and planned apprenticeship as a learning relationship between experienced and inexperienced people is ancient. The problem is the whole concept of interns who are compensated neither by money or teaching, whose employment is almost entirely unregulated, and who are starting to make headlines in all industries, let alone filmmaking. It's a problem that's infected more or less any industry since the economy went south, but has been growing in moviemaking for a decade at least and is now more common than ever.

Even once we've excepted the old-pal charter of working with existing, paying clients, it's still not a simple situation. There must reasonably be a moral difference between funded productions that choose not to pay people, and unfunded productions who can barely afford their camera equipment and couldn't choose to pay people if they wanted to. Still, productions which absolutely could not afford to pay even a token fee – possibly the national minimum wage, as if that's easy to enforce on a schedule as flexible as that of a film – as a mark of respect are probably quite rare, and almost all producers (especially producer-directors) should be willing to accept that filmmaking is a collaborative art. Since many of the collaborators do not receive significant artistic credit for the results, they should reasonably receive financial compensation instead.

But whatever the motivation, it seems that there will continue to be productions which offer unpaid work in the hope that people will view it as worthwhile experience. The real question, therefore, is how reasonable that view is, and how worthwhile the experience might be, whether it's about observing and learning, or making the tea and paying your own travel expenses. I think that most of the unpaid positions that exist on short films and low budget music videos actually are, quite often, expected to be skilled, regardless of the ability of beginners to fill the role. Producers generally only try to get away with the human-teasmade jobs on higher-end stuff, where it's perhaps less excusable, given the budgets involved, but might actually do more good in the least-tangible senses of contacts and visibility. So, a good first principle might be to find out specifically about the proposed work, in writing, and gauge the response against the quality of the production, overlooking, of course, the tendency of producers to present all projects as Oscar contenders. At some point it's about trust. If something smells like a prospects-free two-person shoot behind the bike sheds, it probably is, and it's therefore possibly worth giving a miss.

The darker side of working for free, at least in an oversubscribed industry, is that in extremis there will always be someone willing to do for free a job that would otherwise have been done by someone for money. Choosing to work for no money for one's own sake is one thing; depriving someone else of gainful employment is quite another. Whether any particular job represents a risk of this can be difficult to establish, especially on that hard-to-determine middle range when it isn't obvious how much money is really available for crewing. Asking about which people and equipment are already involved is one approach, since the presence of well-known or very experienced people, or very high end equipment, indicates that there is probably money that they'd prefer not to give you.

One of the more political aspects of working for free is that it can exclude people from being involved at all. It's difficult to avoid the reality that the people who make the big decisions in film and TV have long been from a sector of society that's more affluent than average, and I would hate to think that it would become a requirement that all film crew also had to come from families who were willing and able to support their working for free, for years, in one of the world's most expensive cities. Even if you're the world's most laissez-faire capitalist, there must be a concern over the sustainability of any business which is reliant for its survival on unpaid labour. This may not be a reason not to take freebies, but it doesn't make productions who offer them look particularly good.

And this is the big one. Many of today's most senior crew went through apprenticeships, whether formal or informal, which involved stringent union entry requirements (to a union that mattered) and a working culture with significantly less observance of the polite and the politically correct than is now the norm. There are arguments – perhaps rather vague arguments, coming largely from anecdotal evidence – that this is useful as a toughening-up exercise, given that even the normally benign working environment of a film crew can require perseverance in the face of both psychological and physical adversity on, say, an overnight shoot, outdoors in November. Still, it's difficult to claim that a work ethic is being demonstrated under circumstances where the most obvious thing about the terms of employment are that the work being done is, literally, valued at zero. Regardless of the merits or otherwise of previous systems, though, what they did not do was measure someone by their ability to live on no money. The trials of industrial initiation thirty years ago should not be used to excuse the excesses of today.

So, should people be expected to work for free, and should we be willing to do so if asked? I'm not going to be daft enough to offer a blanket answer here, but I think we've covered some of the main considerations. Nobody wants to be difficult, but from a purely selfish point of view – from which the producers in question may well be operating – the only reliable policy is to ensure that the proposed work and the benefits arising from it are clearly defined, in writing, such that both parties can evaluate the worth of doing a job, and know exactly what to expect.