More powerful rendering than your desktop... in your browser! 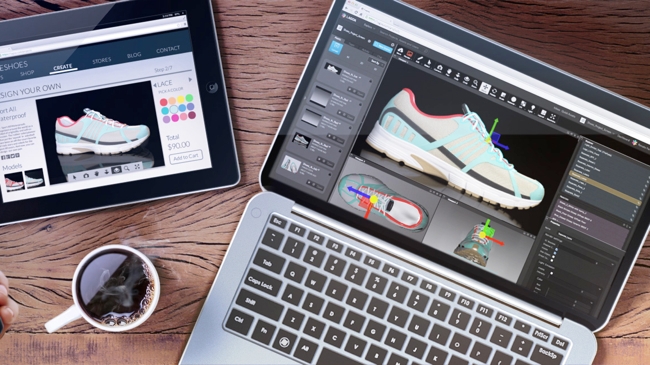 There are so many things you can do in the cloud now but until now, designing photo-accurate 3D models hasn't been one of them!

It's perhaps a sign - and indeed a confirmation - that we're living in an exponential age that you no sooner have a vague idea about something than you find that it already exists as an up-and-running business.

And nowhere is this more the case than with cloud services. Almost every week we come across a new facility for creative people that's based on remote servers and accessed via the internet.

Anyone who's worked in more mundane jobs that the ones that RedShark readers typically do, probably thinks of the cloud as the way they do their email, or perhaps via a project management tool like Basecamp https://basecamp.com/

These are great services, but they don't exactly require a lot of processing power at the far end. They might call for something that can handle a lot of transactions, but there's nothing like video transcoding or colour correction going on with a bunch of text or database files.

So this has worked rather well for cloud or web services so far. Very little information has to be transferred, and there's virtually no hard processing to be done on the servers.

But all this is changing. And it's turning things on their head.

What's the first thing you think of when you specify a computer for 3D work? Especially if you need photo-realistic results? It's a powerful computer. 3D calculations are massive consumers of processing power. If time is money, the speed your computer can render an image is directly proportional to you or your company's income.

Thats what's different about Lagoa, and it makes you stop in your tracks if you haven't come across it before.

What Lagoa is doing is providing not only extremely powerful photo-realistic software in a browser, but it's doing all the hard number-crunching stuff for you in the cloud. Essentially, any computer can become a powerful rendering monster, because that's exactly what it's not having to do.

And because it's in a browser, it's cross platform. All you have to do is make sure that your browser has Web GL, which is

"a cross-platform, royalty-free web standard for a low-level 3D graphics API based on OpenGL ES 2.0, exposed through the HTML5 Canvas element as Document Object Model interfaces. Developers familiar with OpenGL ES 2.0 will recognize WebGL as a Shader-based API using GLSL, with constructs that are semantically similar to those of the underlying OpenGL ES 2.0 API. It stays very close to the OpenGL ES 2.0 specification, with some concessions made for what developers expect out of memory-managed languages such as JavaScript."

Being in the cloud has other benefits too: you can collaborate in real time with your colleagues as the sit on trains, planes, buses and kayaks.

Watch Lagoa's launch video, accompanied by some fairly unrelaxing dubstep, after the break.