Why 4K is more important than you think 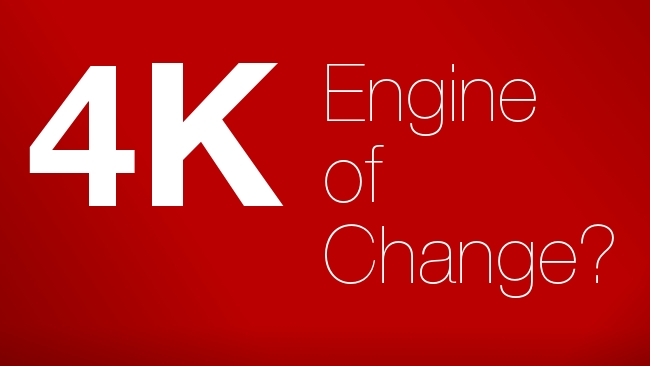 In a recent article on The Hollywood Reporter, the paper questioned if 4K was "the best way to attract consumers." It's a fair question, but it may be missing the point.

Back in January, I donned my prognasticator's cap and wrote an article on the 2013 outlook for consumers. In it I doubted the prediction by NPD Display Search that 154,000 4K sets would be sold in 2013. According to a more recent estimate by the Consumer Electronics Association, the true number is more likely to be around 57,000.

I also penned another article where I wondered aloud if consumers even want 4K. Don't get me wrong; as someone who works in video production, I'm am deeply interested in 4K acquisition and the production pipeline in general. But the professional market is much different than the consumer market and simply adding more pixels isn't going to excite many people who rarely get the best picture on their current HD sets.

So, you may think that an article on The Hollywood Reporter entitled 'Why 4K Might Not Be the Best Way to Attract Consumers' would be right up my alley. But after reading it, I came away thinking that perhaps I've been looking at consumer 4K the wrong way.

The THR article covered a symposium of the Society of Motion Picture and Television Engineers (you probably know it as SMPTE). The professionals in attendence overwhelmingly declared that 4K, in itself, is not enough to lure consumers, but that a combination of more pixels, faster frame and refresh rates, and brighter, more colorful pixels would be the ticket. Dolby, the stalwart sound and video pioneer, weighed in, squarely on the side of 'better' pixels. You can visit the original Hollywood Reporter article for a discussion of nits (a measurement of light) and the quest to make your television display the whole range of light visible to the human eye. It's fascinating stuff, and on surface, I agree that a higher quality image is not dependent on number of pixels alone. However, when reading this article, I realized perhaps a broader scope is necessary to gauge 4K's impact on the consumer front.

It's easy to regard consumer 4K as just the next evolutionary step in the advancement television technology. As such, I'm personally underwhelmed by 4K as an emerging standard. I've seen a 4K television side-by-side with an HD set, both set-up to give the best possible video currently possible. At typical home viewing distances, the difference isn't that great. But ultimately, that doesn't matter. Eventually, and probably sooner than we think, 4K/UHD will be the only type of television you can buy, even if most of the content you watch on it will be sub-4K.

I am more interested in how 4K will be a transformative, disruptive influence for the consumer market. First off, we think of consumer 4K as an end result: a better, more captivating visual experience. Instead, let's consider the coming of 4K as an enlargement of your home data pathway. Yes, I've read that it may be possible to produce compressed 4K at HD file sizes, but any honest accounting of the matter would conclude that your cable and broadband connection stream must become more robust to deliver a consistent 4K viewing experience. While Google Fiber and traditional ISPs race to deliver consumers higher connection speeds, enclaves of very smart people are figuring out ways to leverage that bandwidth in new and exciting ways. Expect 4K to also usher in a host of rich media products to further enhance your living room entertainment options, with greater and seamless dual screen experiences and better, more active social integration of television viewing.

More importantly, as video producers and professionals, we should think about all the ways 4K can be implemented outside of a traditional television screen. I've always thought that 4K makes more sense for computer monitors and any display meant to be used close-up. Oculus Rift, the virtual reality unit that snagged nearly $2.5 million in Kickstarter presales, recently announced plans for a 4K model, which seems like the perfect marriage of resolution and utility. Having what amounts to your own personal IMAX display sounds very appealing, and 4K could be just the thing that breaks VR into the mainstream. Or maybe not. But if this is what we're discussing at the start of the 4K era, just imagine what else is being cooked up at R&D labs throughout the world.

For consumers, 4K is coming. While we may fret at the obsolencence of HD, 4K will bring with it a world of wonders that, presently, we can just glimpse. But as a former-4K naysayer, I must admit, I like what I see.