A glimpse inside Apple with their latest financial results 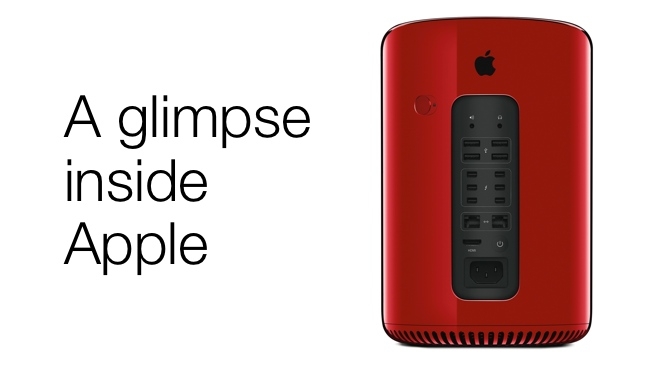 On the day that Apple unveiled its latest financial results, marketing packs hit the media promoting the 'computer we were insane to build… the new Mac Pro.’

At their October earnings call, more aggressive pricing for the new MacBook Pros and iMac were referred to by CEO Tim Cook, alongside the new iPads, as part of the reason that quarterly profits were down year on year. Also called out were deferred revenue ($900 million) from software, which is to say making the iWork/iLife apps free of charge, along with currency exchange factors.

The headline figures are $37.5 billion revenue in the last quarter (up from $36 billion is same quarter last year), while profits of $7.5 billion were down from $8.2 billion in the same period. So a 4.2% growth in revenue alongside an 8.6% decline in profit. The figures were broadly better than Wall St expected, although shares still fell by about 2%.

Mac sales down - but not as much as PCs

As expected, Mac sales were down, 4.6 million compared to 4.9 million, however it was pointed out that the 4.4% fall compared to a 10% fall for PCs with the Mac gaining market share in 29 of the last 30 quarters. The new models, the new pricing should also help sales in the next quarter.

The iPhone remains Apple’s most important product by far, accounting for 52% of sales. The iPhone 5S/5C launch helped drive record sales of 33.8 million compared to 26.91m this time last year, although the average selling price is down slightly. For context, the iPad accounts for less than a third of this revenue and, without new models, its growth was flat but expected to rise in critical Christmas period with iPad Air due this Friday and Retina iPad Mini (late November).

New products in new categories are coming in 2014, almost certainly the iWatch and maybe 4K iTV, but Tim Cook would only confirm "if you look at the skills that Apple has from hardware/software and services, and the incredible app ecosystem, this set of things is very unique... We obviously believe that we can use our skills at building other great products that are in categories that represent areas that we do not participate today. We're pretty confident about that.”

Questioned specifically about the ‘desktop-class' 64 bit processor and fingerprint sensor in the iPhone, Cook immediately responded by saying ‘everything that you mentioned is front-end of a long roadmap’ before quickly getting into iPhone 5S sales figures and the customer experience. This comes back to the 5S being the ‘most forward looking’ iPhone and where Apple’s road map will ultimately lead is fascinating to speculate on.

In the call preamble, it was mentioned that the iOS platform ‘accounts for 95% of enterprise mobile app activations and 72% of all mobile device activations in September quarter, while iPad accounts for 90% of tablet activations.’

Apple has always been wary of the Microsoft dominated corporate market and the recent iLife/iWork app updates, while initially praised for pricing (free to anyone with a new computer/iOS and very liberally interpreted), have fizzled as omitted features become evident. Of course, FCP7 users know all to well that Apple is fully prepared to burn down an existing program into a simplified, modernised core and build from there. The corporate data strongly suggests Apple is doing that again with iWork, rather than abandoning the prosumer/enterprise market entirely.

How fast Apple can rebuild those apps we’ll have to see, but for AV professionals the bright light at the end of a very long tunnel is now imminent. The Mac Pro is enjoying rather over exuberant press promotion ‘turns conventional thinking on its head, then kicks the living $#&% out of it’ according to Apple, with pro apps FCPX and Aperture due imminent updates.