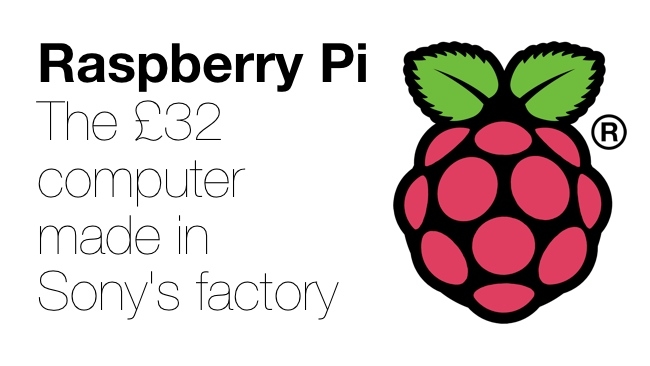 Major landmark for the Raspberry Pi and for Sony

Raspberry Pi, the minimalist Linux computer without a box, isn't built in China, which given its minimalist price, is surprising. In fact, it's built in Wales, in the UK. We wrote about the Sony Technology Centre in detail here recently.

Part of the economic success of the Welsh plant is that they make their expertise and precision manufacturing available to other companies.

The Raspberry Pi may be small and a bit "bare-bones" but it contains all the ingredients necessary for modern computing. It even has an HDMI socket, making it easy to plug into monitors and TVs.

So, needless to say, even though its target market was education, it's extremely popular with hobbyists of all ages.

While you might hesitate to run a video editor on the 'Pi, that hasn't stopped XBMC - originally an "X-Box Media Centre" being ported to it. Yes, that's right: this £32 computer can act as a Home Theatre.

The best news to come from all of this is that Rasperry Pi enthusiasts days are springing up all over the world, bringing the joys (and perils) of computer programming to a wider audience.

With the Internet of Things rapidly approaching, this is exactly the sort of thing we need to see happening.

One Million Pi’s Made in Wales

Since securing the multi-million pound third-party manufacturing deal a year ago, the Pencoed-based business has seen the success of the Pi grow from strength to strength.

Originally the site was contracted to make 300,000 units for element 14, a multi-channel electronic distributor which has been selling the innovative device since February 2012.

However, as demand for the Raspberry Pi has grown exponentially Sony UK TEC is now producing up to 12,000 units per day. Furthermore, this rapid increase has seen the site employ an additional 40 individuals to cope with the level of demand.

Claire Doyle, Global Head of Raspberry Pi at element 14 said: “We are of course delighted to be able to announce the one millionth Raspberry Pi coming off the production line at Sony UK TEC. In just under a year since we signed the deal with Sony UK TEC we have reached a milestone no one thought would happen in such a short timeframe but we have worked hard to promote the product and as such have been able to capitalise on the success and the popularity of the Raspberry Pi.

Steve Dalton OBE, Managing Director of Sony UK Technology Centre commented: “The Raspberry Pi, is a fantastic example of UK innovation, design and engineering, at its best. From the day the product launched we knew the Raspberry Pi would be a success and we wanted to be part of it. We’ve been delighted and staggered by the continuous demand of the Pi across the world and there are no signs of this decreasing anytime soon.

“In a little under a year we have created one million units at our site in Pencoed, Wales which has resulted in us generating 40 local jobs. It’s a fantastic achievement, which should be celebrated. The work done by all parties has acted as a significant milestone in the UK manufacturing industry, which ultimately helps to support and grow the UK economy.

“The Raspberry Pi is testament that if you have the right product, manufacturer, distribution channels and customer demand any idea can be a huge success. We look forward to continuing our work with element 14 and The Foundation and we’re excited about what the future holds for this innovative product.”

The product which has been developed by non-profit Raspberry Pi Foundation, is designed to stimulate young people’s interest in computer programming and electronics, but it has been hugely popular with hobbyists and developers.

To celebrate the milestone Sony UK TEC presented The Raspberry Pi Foundation and element 14 and with gold plated Raspberry Pi’s to mark the achievement.