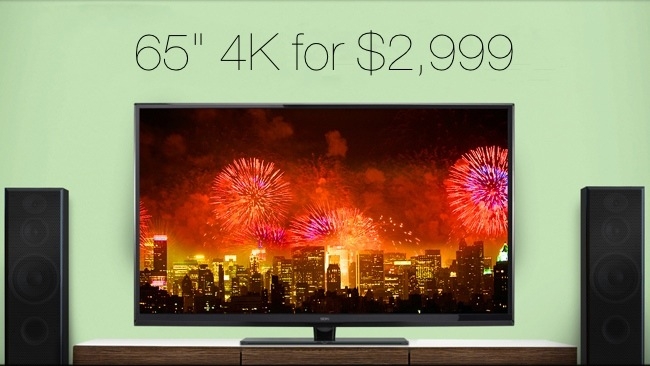 Seiki surprised the entire tech world when in April it announced its 50" 4K TV for around $1,200. This was at a time when the only competition was Sony's gargantuan and pretty stunning-looking 84" 4K Bravia which was available for around twenty times the price.

And then, when the reviews came in, perhaps an even bigger surprise was that the upstart entry to the field actually wasn't bad. Certainly, it was basic, lacking any kind of Smart TV options, but the picture was perfectly OK, and reports came in quickly that people were buying the set because it was almost an impulse buy at that price (everything is relative...).

The 65" model, to be released in September, will cost $3,000 MSRP, so you'll probably see a discount on that as well.

We first saw this announced on Gizmodo, and from the comments after their article, it's clear that a lot of people are sceptical about this TV company, although Seiki has been a big television manufacturer for years - it's just that you probably haven't come across them selling under their own name before.

If you can live without Smart TV features and don't mind the 30 fps limit imposed by HDMI 1.4 at 4K resolutions, then this does indeed look like a bargain. But don't forget that the other major manufacturers are catching up and have genuinely top-end products at pretty reasonable prices as well.

"Riding the success of the Seiki 50- and 39-inch Ultra HD models is the new 65-inch
model offering an expansive 4K digital entertainment experience," said Frank Kendzora,
executive vice president, Tongfang Global, Inc., for Seiki Digital brand. "It's no secret that the
Seiki brand is the price leader in the 4K Ultra HD category, and we aim to further our market
leadership by offering the best value in large-screen 4K Ultra HD TVs with exceptional picture
and build quality."

For all of its Ultra HD TV models, Seiki offers the industry's first one-year, no-nonsense,
replacement warranty through its U.S.-based technical support at (855) MY-SEIKI