Welcome to the new (GoPro) SuperHeros 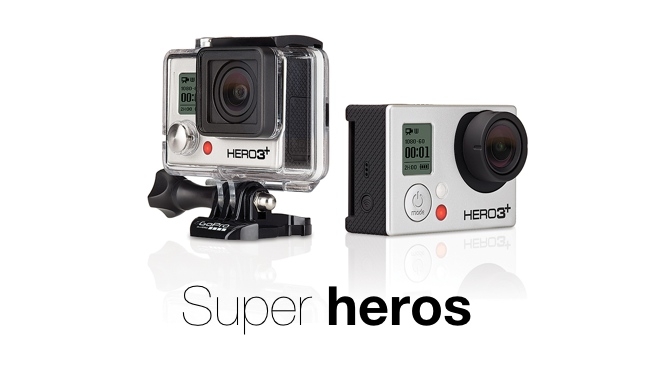 The new cameras have a raft of improvements. They're 20% smaller and - addressing a common criticism - have 30% better battery life.

We recently predicted that a future model of GoPro would have faster 4K capture. It's clearly not this one which has the appearance of strong face-lift rather than a completely new device. Still, why radically change a product that's doing so well!

Other improvements include (on the Black edition)

"Super View" which "captures the world's most immersive wide-angle perspecitve". (As soon as we find out what this actually means, we'll let you know)
Auto Low Light which adjusts the frame rate for varying lighting conditions (see our comment above!)
A better lens

The Silver edition has

SAN MATEO, CA (October 1, 2013) – GoPro today announced the availability of its new HERO3+ line of cameras, featuring a 20% smaller and lighter design and 30% better battery life than previous models. These upgrades combine with an improved lens and convenient new video capture modes to produce the most advanced and easy-to-use GoPro, yet. In addition, GoPro announced several new mounting accessories that further enable immersive content capture during any activity. The HERO3+ line of cameras and accessories are now available at GoPro.com and at select retailers worldwide.

GoPro is enabling people to capture and share life experiences in a way that was never before possible. Prior to GoPro, it was very difficult for anyone to capture content of themselves doing anything without having the help of someone else to film them. GoPro has enabled a new era of self-documentation whereby people can now easily wear or mount miniature ultra wide-angle GoPro cameras to record themselves doing just about anything, anywhere. The result is a surge of immersive user-generated and professional content made possible by the versatility and affordability of GoPro’s cameras and accessories. An average of three GoPro “tagged” videos are uploaded to YouTube every minute, and GoPro is used by the world’s leading production companies to help produce some of today’s most engaging film and television content.

“We have used GoPro cameras in some of our biggest productions, like Survivor and The Bible. GoPro has allowed us to capture and share fascinating new perspectives that previously weren’t possible or were too costly, which in the end makes for better story telling. We are always excited to see what GoPro is working on next,” remarks award winning producer, Mark Burnett.

“The HERO3+ illustrates GoPro’s commitment to innovation. We took the world’s best-selling ultra compact camera and made it better because we’re relentless in our pursuit of delivering the best possible user experience to our customers. We saw that we could make the HERO3+ significantly smaller and lighter while at the same time increasing battery life 30%. We saw the opportunity to design a sharper lens, so we did it–improving GoPro’s already highly regarded image quality. And we thought up exciting new features like SuperView, which enables the world’s most immersive wide-angle video. These are all features that we as passionate GoPro users want for ourselves, and we’re excited to share them with our customers around the world,” said Nicholas Woodman, Founder and CEO of GoPro.

The HERO3+ Black Edition - The Most Advanced GoPro Camera Yet.

The HERO3+ Black Edition camera has a suggested retail price of $399.99.

2x faster image processor than the HERO3: Silver Edition
Enables 1080p60 and 720p120 fps video
Innovative new housing yields a 20% smaller and lighter overall package when camera is installed in housing (waterproof to 40m)
4x faster Wi-Fi for quicker transfer and playback of photos and videos from your HERO3+ camera to your mobile device when using the GoPro App

The HERO3+ Silver Edition camera has a suggested retail price of $299.99.

GoPro is the world’s 2nd largest camera accessory brand* thanks to its industry-leading line of wearable and gear-mountable accessories. Mounts and accessories are key to enabling the life-capture creativity of millions of GoPro customers around the world. GoPro announced today several new mounts, including:

Jaws Flex Clamp Mount – A quick way to clamp your GoPro camera to a variety of objects. Use the optional opposable neck to achieve a wide range of camera positioning and adjustability. Jaws securely grips irregular shapes and super slim objects thanks to its innovative design.
Junior Chest Harness – A smaller version of our adult-sized Chest Harness. Perfect for kids ages 3+, the Junior Chest Harness is great for capturing immersive footage of a child’s world from their perspective—from skiing and skateboarding to slides and swings.

Headstrap and QuickClip – The QuickClip is a new accessory that now comes bundled with GoPro’s Headstrap. The QuickClip enables ultra-compact, low-profile mounting to baseball hats, belts and other objects ranging in thickness from 3mm to 10mm.

Check out other new mounts and accessories at: www.gopro.com/products

Awesome Edits Made Easy: GoPro Studio 2.0
While HERO3+ cameras and accessories make it easy to capture incredible footage, GoPro Studio 2.0 makes it easy to edit and share incredible videos. New to Studio 2.0 are GoPro Edit Templates–customizable templates of some of GoPro’s best videos made available for free to users. It’s as easy as picking out a GoPro video you like and dropping your own GoPro clips into the pre-made edit template. Killer soundtracks are included and all the edits are stylishly timed to the music by GoPro’s famous production team. Now anyone can easily create professional-looking videos, making it more fun than ever to GoPro.

Simple to use storyboard-based video editing software for Windows or Mac
Manually create a video with transitions, titles, and soundtrack, or
Use GoPro Edit Templates to quickly create professional-looking videos based upon edits originally produced by GoPro’s acclaimed production team