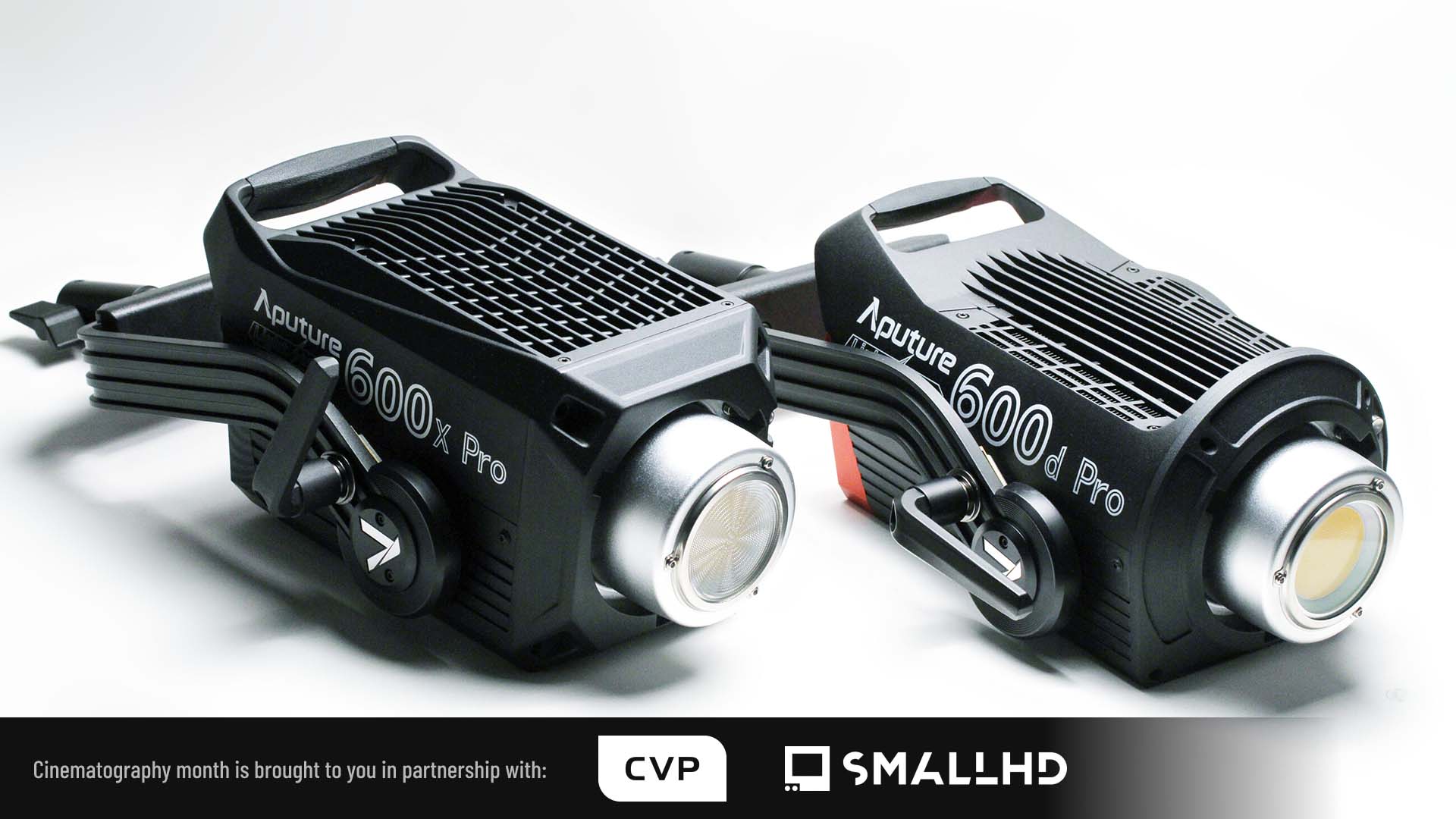 Aputure's 600 series lights produce some serious light. Phil Rhodes compares models and gives us his verdict on these lighting beasts.

Today, we confidently expect one 600-watt light will be considerably brighter than another 600-watt light that looks very similar on the outside - and that's OK.

It's easy to say that the availability of 600-watt LEDs represents something of a watershed. Even on paper they exceed the output 575W HMIs, and in practice the layout of these LED hardlights, a sort of transitional open-faced PAR with the supplied reflector, is much more optically efficient than a Fresnel. Aputure's high-gain multifaceted reflector doesn't create quite such a pretty light as the more conventional Bowens-mount beauty dish, projecting a double-haloed shadow much like any PAR, but it does push all of the photons in a very similar direction. 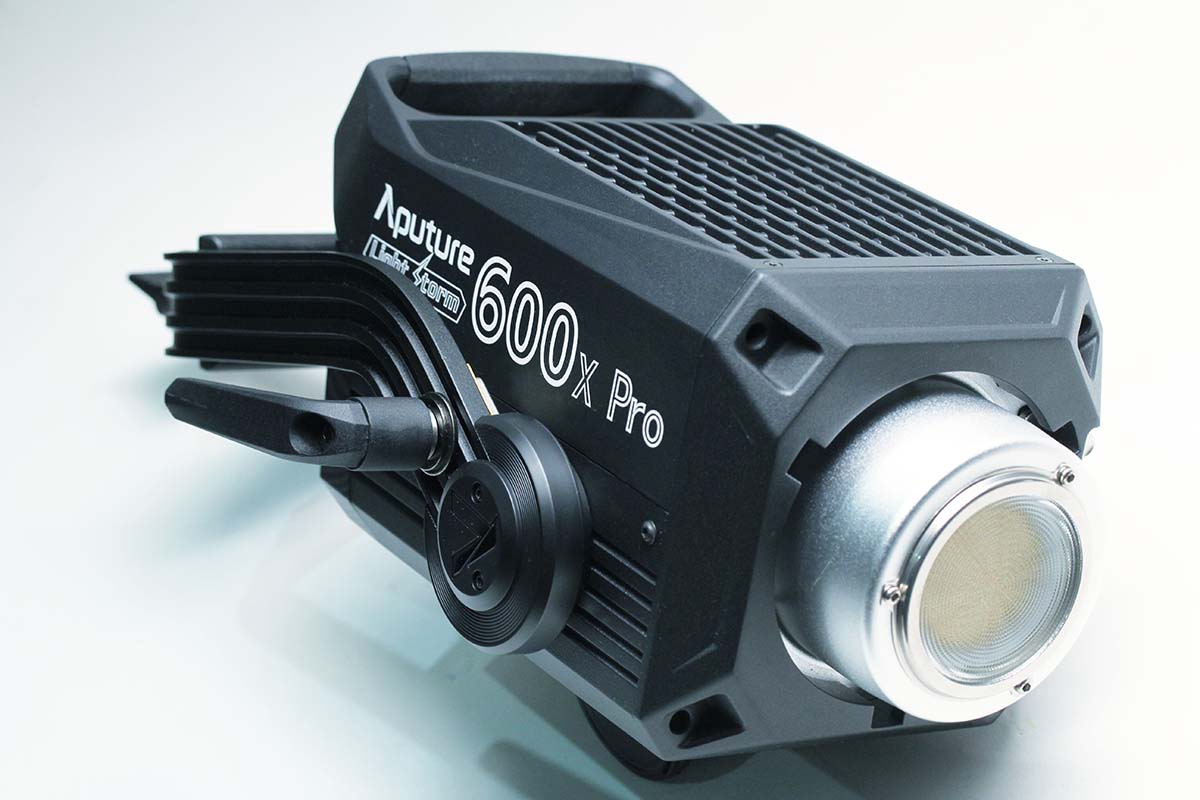 Pictured is Aputure's recent LS 600X Pro, a variable colour temperature light which necessarily sacrifices some output for that flexibility. A light containing both tungsten- and daylight-balanced emitters will not be using around half of them at maximum or minimum colour temperature. It could use them all at intermediate settings, though many lights are designed to maintain an approximately constant output as colour changes, avoiding brightness shifts as colour temperature is adjusted, so it may never turn on both channels at full power simultaneously. The 600X optionally supports both.

Both lights use similar (though not identical) housings which are described as weather-resistant, though that seems to imply they're proof against light rain showers as opposed to a violent tropical storm. The intent of the Light Storm Pro series is, we're told, to address sturdiness and survivability on a grip truck. As such, there's a query to make about the plastic fan grill on the bottom of the power supply, which seems at risk of damage if the it's inadvertently put down on an unyielding object. When the mains input or any of the DMX or DC connectors is used, the ballast has to be laid on its side anyway, though it might be better to see all the connectors on one end so it can be carried and set down in the same orientation with everything accessible from one angle. 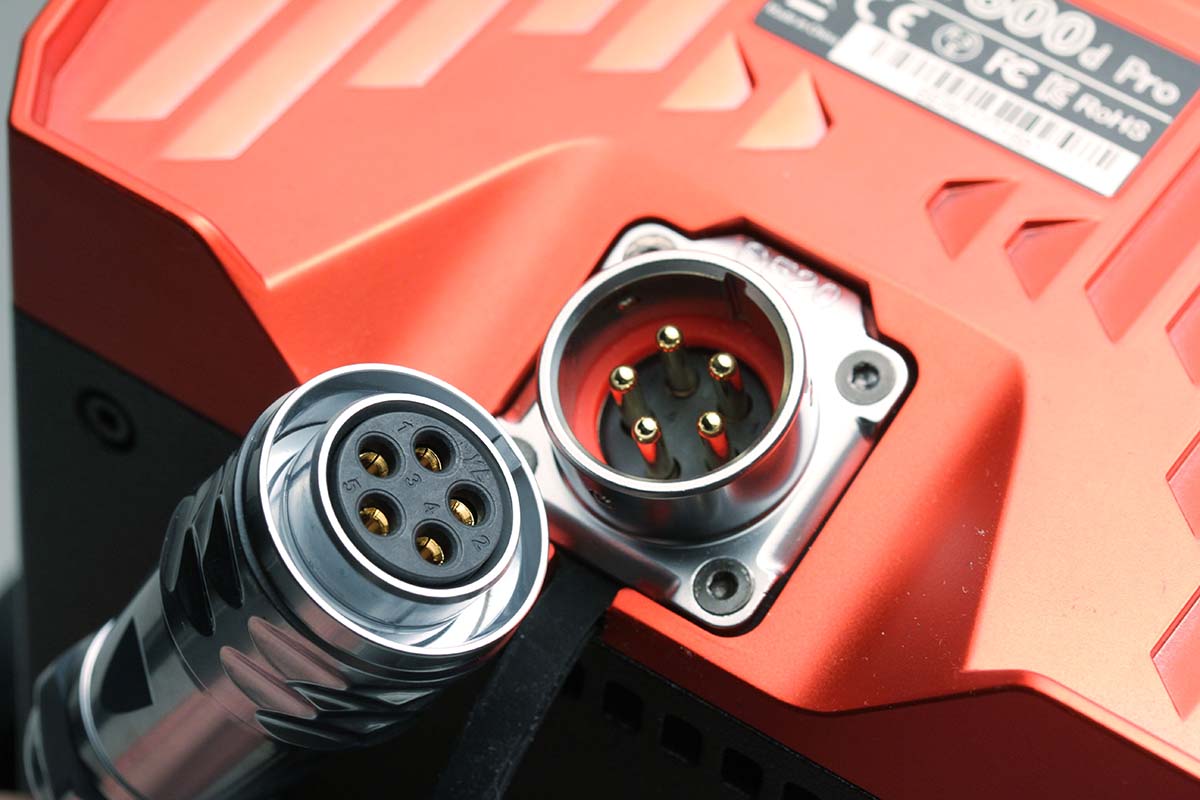 Locking connectors are used throughout.

The 600-series are both more heavily built than most of the company's previous options, with a yoke formed from an extruded profile and heavy-duty, locking connectors throughout (the cables are still a little kinked out of the box, but it's improving). It's apparently been recognised that, as power levels become high enough for higher-end productions, sturdiness becomes more crucial.

The power supplies are bulkier than most 575-watt HMI ballasts, and though there's a stand clamp it'd have to be a beefy stand. Add two V-lock batteries for off-mains operation (28V types are required for full power) and perhaps a large Bowens-mount modifier on the head, and it might be better to put the power supply on the floor. Head and ballast are both fan-cooled and the fan noise is, well, present, though not as bad as the tiny, whiny fan on one older 300-watt Aputure design. The 600 series produce a broadband rush of turbulent air, which is harder to filter but less objectionable to begin with. It can operate entirely passively, although only up to 10% power. Control options are too many to list, but include a wide range of wired and wireless networking including Aputure's tidy mesh network implementation.

Power-wise, they're not something you want to inadvertently glance into. Measurements were made at two metres, because at one metre, with the supplied reflector, these lights both overexposed the UPRTek CV600 meter. All measurements are with the 600X in constant-output mode; maximum power mode is naturally brighter at midrange colour.

The 600D measures around 5700K, well within the stated specification of 5600K plus or minus 200K. If that seems like Aputure giving itself a generous margin, consider that a 100K error above 5600K is a mired shift of three, and the subtlest available colour correction filter is something like a one-eighth straw, with a mired shift of twenty. 5600K to 5700K is a vanishingly tiny error. TLCI is never less than 96.5 and while R12 blues are a fraction less than we might prefer, at 75 across the dimming range, it's more or less a problem with the state of the art which will only go away when violet emitters become more generally available. R9 reds are never less than 92. In the end, people buy 600-watt LEDs because they want output, and the 600D provides; at two metres with the multifaceted reflector, it achieves 21,000lx at full power. 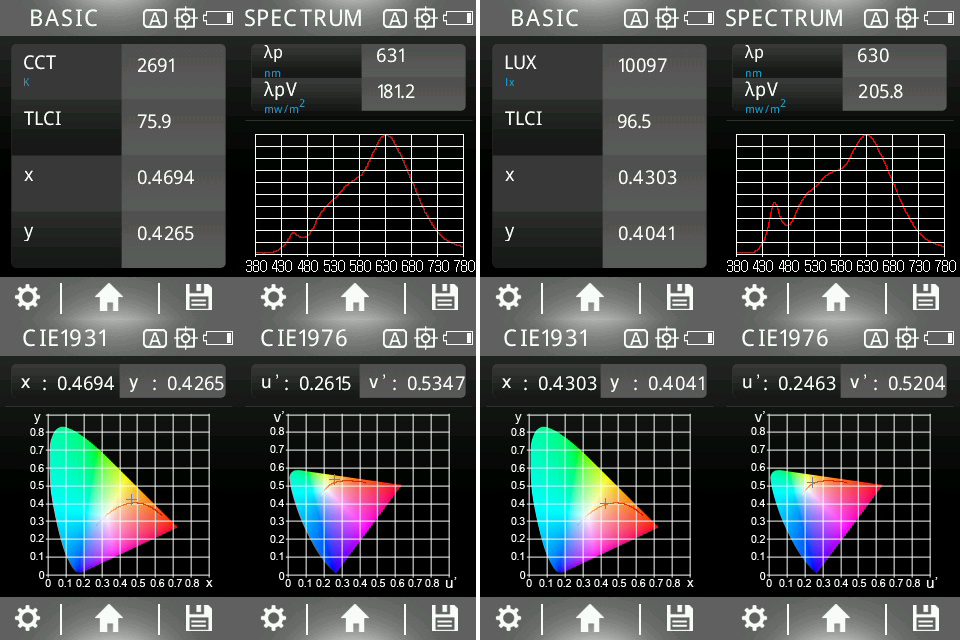 The 600X, by comparison, peaks at around 13,300lx, which is a bit less than a stop lower in output. That occurs at around 4200K indicated which meters at 3900K, a mired shift of 18, or more or less an eighth straw filter. At 6500K, the 600X achieves 11,000lx. At its minimum 2700K, which reads very accurately as 2690K, it achieves about 8,000lx; it's not entirely surprising that warmer LEDs, which phosphor-convert more of the blue LED's output, are somewhat less efficient than the daylight ones.

So, the assumption that the 600X in constant-output mode should be a stop dimmer than the 600D is approximately borne out, although it still peaks, albeit by less than a stop, in the middle colour temperature ranges. The only glitch occurs at very low colour temperatures, with TLCI dropping from a healthy 90 at 2900K to a less-healthy 75 at a selected 2700K. This is TLCI, not CRI, so 75 is still a usable light, and this is common with very low colour temperature LEDs. Still, it's worth bearing in mind if we want to create a candlelit interior for our fantasy drama's tavern. Otherwise, colour quality is fine, with TLCI never less than 90 above 2900K with R9s in the 80s and 90s.

Aputure's 600 series are absolute beasts, though now they're not quite the beastliest; 1200-watt options now exist. That's as big as someone can plug into the wall in many regions, provoking questions about what might come next. A design capable of drawing from two wall sockets at once, which has been done, can obviate expensive power supplies in 110-volt jurisdictions, so here's hoping. We look forward also to some more ruggedisation now the economical Amaran and professional Aputure brands are being separated. Quite where else we go from here is a matter of innovation, and that's an issue that faces all manufacturers equally.