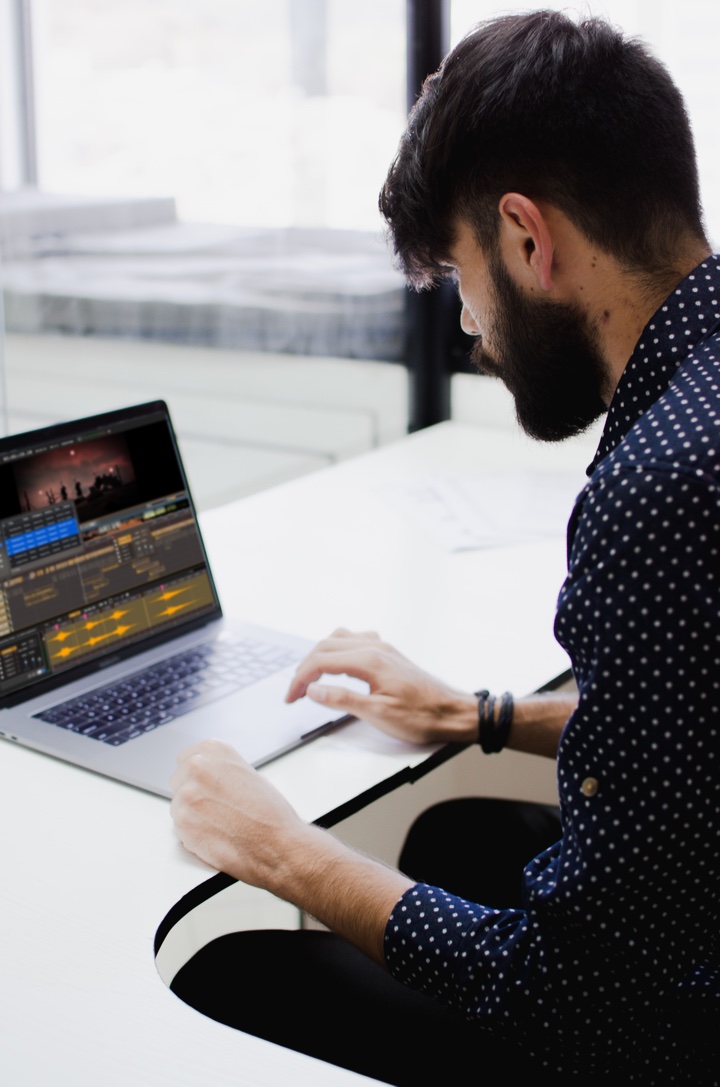 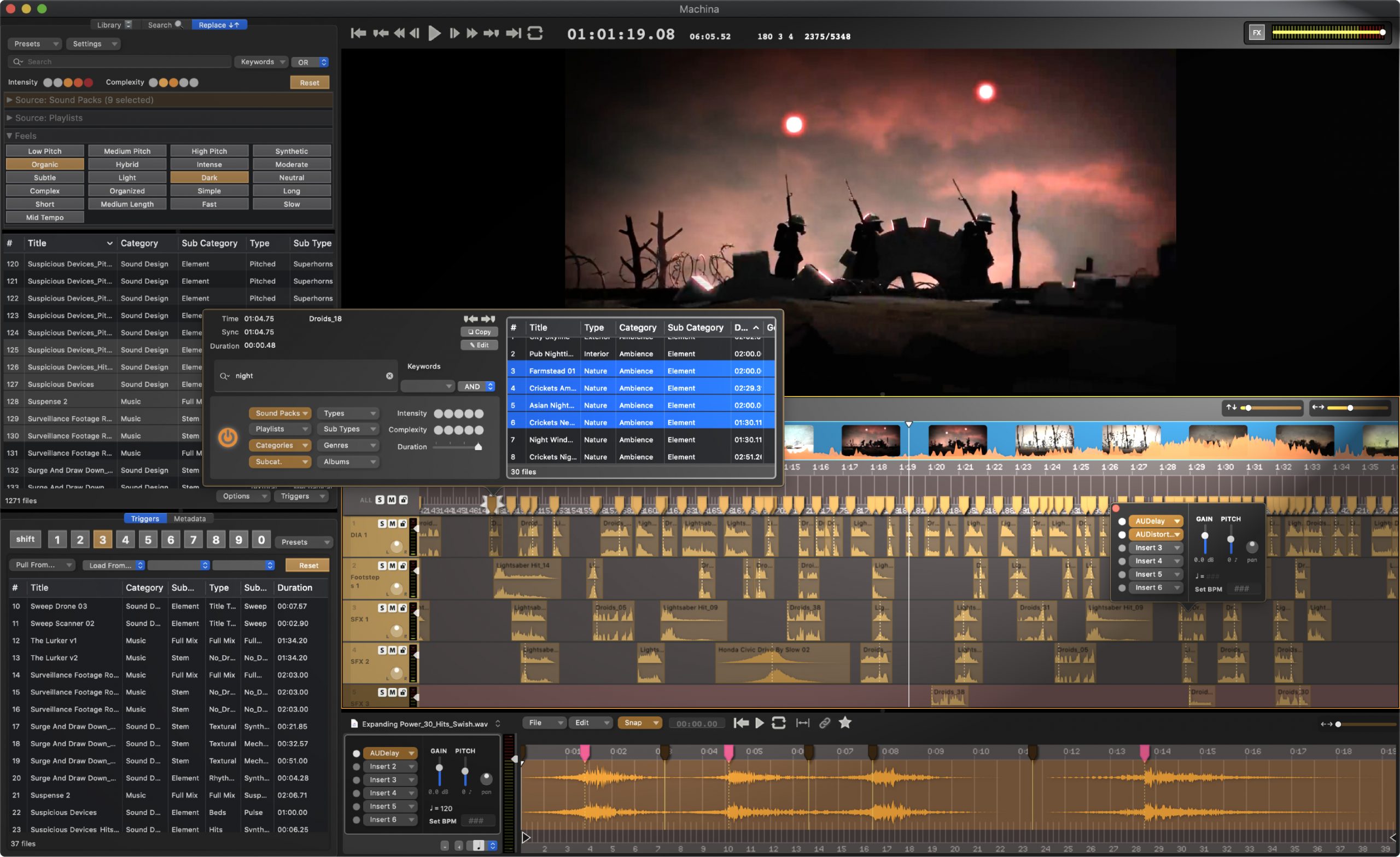 The world of audio production for films is pretty secretive - but not intentionally so. It’s just that the whole process typically takes place away from the limelight.

Sound production is pretty cool, especially if you’re an audio guy like me - but the process of selecting and matching sound effects to events in a video clip certainly isn’t anything that you’d get enthusiastic about. Mostly, it’s sheer drudgery until you see and hear the finished result.

I learned about the process unexpectedly when in a previous life I was selling very early DAWs in the UK to recording studios, musicians and broadcasters.

Someone mentioned to me that this particular DAW product would be ideal for audio track laying for films - a process today that’s often included under the heading of “Sound Design".

I sold quite a few DAWs to audio post facilities and they were responsible for the soundtracks of films like The Wrong Trousers, which used up to 80 virtual audio tracks for the complicated layers of sound effects.

The old way is a slow way

But it was an incredibly slow process. First you have to either create your sound or find it in a CD library (there’s no location audio with animation). It really helps if you have a collection with clearly labelled and searchable audio clips. Then you begin the laborious task of fitting sound effects to events in the film. Each time the film calls for an effect, you stop the video on the exact frame and then drop the sound effect on the timeline.

Now, here’s the thing that you probably won’t realise unless you’ve actually done it: the start of the audio file will most likely not be the exact point that you need to synchronise with the video.

Imagine a car skidding round a corner and crashing into a lamp post. First you hear the sound of tires squealing, followed by the impact with the streetlamp. And after that, there’s the sound of breaking glass and maybe burglar alarms going off. Even an individual sound effect can tell a whole story.

But within that story, there’s a critical sync point. In this case, it’s the impact with the lamp post. It’s this that you need to match to the action on the screen.

Good DAWs will allow you to set a sync point in your clips and “snap” them to the selected video frame. But it’s up to you to find and set your sync point.

And that’s how it’s been for about twenty years. Nothing much has changed.

But now it has. Audio Design Desk is a completely new approach. In a single stroke, it removes virtually all the pain points from the audio track laying process. 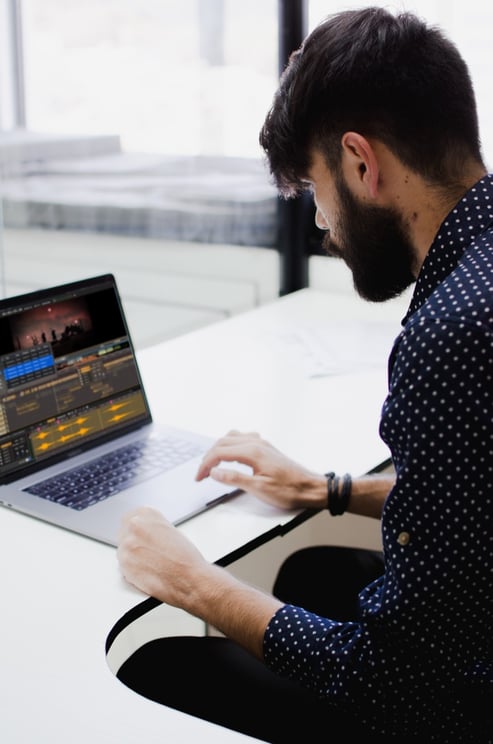 The application comes with a vast sound library with 20,000 audio clips including music. That’s enough to cover virtually everything. If there’s something specific to your production that’s not included, it’s very easy to import custom sounds.

This is key to the whole process. Every sound in the library comes with an embedded sync point - they call this Sonic Intelligence (patent pending). It means that if you’re dealing with the car crash we mentioned above, then you just need to drag the clip into your project and it will automatically sync to the video. It’s hard to overstate how much time this will save.

Imagine a scene like a sword fight with repetitive rapid action that calls for dozens of sound effects. Audio Design Desk improves this process almost magically by allowing sound clips to be assigned to keys on a QWERTY keyboard (or an external controller).

It transforms the keyboard into a sampler, which the operator can “play” by hitting a key at the exact point when the sound effect is needed. Multiple keys can have sounds mapped to them at the same time, so - and this obviously depends on the skill of the operator - it’s possible to place a variety of sound effects in real time across an entire scene.

It’s surprising how accurate this process can be, but of course there are simple controls to “nudge” clips backwards and forwards to get an exact sync.

The combination of sound-effect-to-key-mapping and the embedded sync point is completely transformative. What used to take hours takes minutes.

In addition to the built-in sync point, each clip is associated with rich metadata. In plain English, each clip comes with detailed information that helps place it in the right context. The combination of this data and Audio Design Desks’s AI leads to some astonishing capabilities.

Let’s revisit our sword fight and imagine that the film director has said that the audio needs to be “brighter” or “more prominent” or that the sounds of the sword clashes need to be “more metallic.”

The application will search for alternative sound effects and will automatically replace the original clips - keeping exact sync with the video. Users can also search and place sounds right from the timeline with the magic marker.

This capability extends to music beds, atmospheres and drones.

This really is an astonishing leap forward for soundtrack design. It’s a clever integration of recent technology advances, and demonstrates what can be achieved when engineering and creative talent is focused on a single task. Audio Design Desk is picking up traction too: it was an Innovation Finalist at this month's SXSW in Austin, Texas.

It’s hard to see how this won’t have a radical effect on the lives of sound designers - and not just traditional ones, but new content creators like YouTubers. Sound effects are incredibly important to the YouTube community. Good audio is one of the best ways to boost the perceived quality of any production.