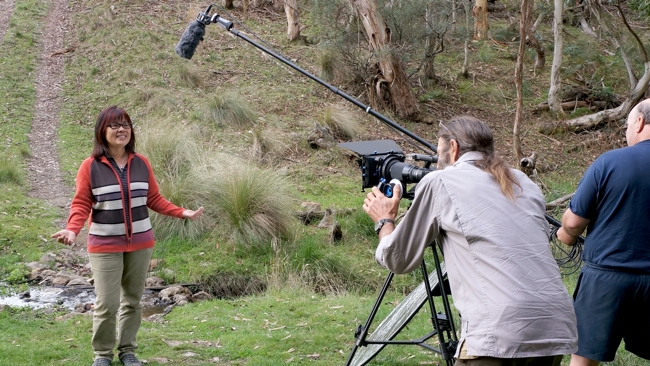 Pro Audio recording in the field

I am now the proud owner of a broadcast quality shotgun (super cardioid) microphone. Although my Sony NEX VG20 camcorder is equipped with a large four piece spatial microphone which will record high quality AC3 stereo and six channel 5.1 Dolby Surround, I have been searching the usual on-line bazars for a portable audio solution which would be more 'directional' than the camera's on-board equipment.

The on-line market place can be a bit of a minefield where audio products are concerned as microphones from Germany compete with 'clones' from China. On eBay for example, you can purchase a genuine and much coveted Sennheiser '416' shotgun for around $1K or a remarkably similar looking little gem from the cheerful Tom Top Wholesalers for about $25 including free international shipping. A bargain?! Probably Not. It may indeed work but any recorded voice would probably sound like it’s talking to you down a vacuum cleaner tube.

As readers of my recent article for RedSharkNews will know, I'm always on the lookout for a good deal but you can now breathe a sigh of relief as I’m not about to waste my hard earned on low quality microphones. Audio is sometimes regarded as the ‘poor cousin’ to HD video and amateur productions can often be distinguished from their professional counterparts by sound quality alone. An investment in quality audio equipment is as essential for me as it should be for you. Nice sounding microphones demand engineering excellence and this costs money. End Of.

Now here’s the rub:  like all studio quality microphones, the Rode NTG-3 is fitted with a balanced XLR plug, whereas my camera has a mini 3.5mm stereo auxiliary microphone socket. This problem is easily overcome by using a cheap, transformer-equipped line converter with some plugs & cables but there is an added dimension here. Professional microphones designed for professional cameras require a ‘phantom’ DC power supply - all 48 volts of it! Most HD video cameras and DSLRs operate with 7 to 12 volt batteries and most if not all, are unable to deliver ‘phantom’ power. Dynamic microphones require no power supply but condenser microphones need a small DC voltage applied to the element and in some cases, a 1.5v or 9 volt battery inside the microphone is sufficient. Many professional microphones on the other hand need 48 volts or thereabouts sent up the cable from the audio recorder’s input socket. This is referred to as ‘phantom’ power because the 48 volt Direct Current is mysteriously ‘superimposed’ onto the microphone’s wires and into the element without interfering with or distorting the audio signal. Spooky!

I should explain here the term ‘balanced’ in relation to professional microphones. Consumer microphones generally have two wires in the cable: hot and ground. Think of the ‘hot’ wire as potentially a great long radio aerial. Even though the ‘ground’ shield screens the ‘hot’ wire from interference, any noise or hum present will simply be amplified by the audio device’s preamps along with the signal. Not so good. In a balanced microphone using TRS or XLR connectors, there are three wires. Think of them as ‘hot’, ‘cold’ and ground. Any noise or hum that sneaks past the shield will be present on both ‘hot’ and ‘cold’ wires simultaneously. The differential pre-amps in a professional audio device are very clever as they will ‘see’ the noise on both wires but amplify only the ‘difference’. That is, your audio signal. Cute! 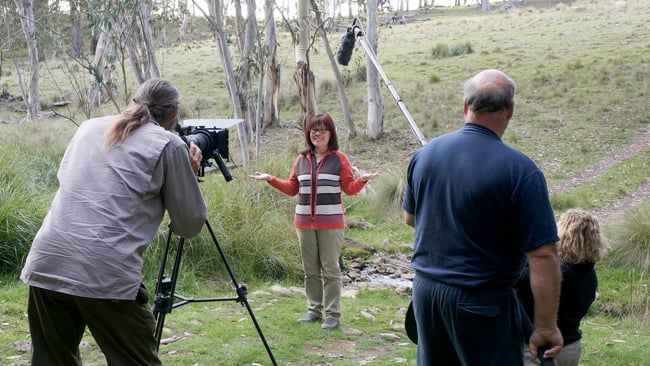 How to get 48v in the field

Now, back to my problem. A solution could be to sell my NTG-3 and buy the cheaper Rode NTG-2 microphone. This would fit all my accessories and the NTG-2 operates from ‘phantom’ power as well as an AA battery. Fine but I really want to keep the NTG-3. This short shotgun microphone is spoken of in the same hushed tones as the legendary ‘416’ but apart from all that chat room mumbo jumbo, well, it just sounds superb!

Another solution could be to build a phantom power supply in a little black box with XLR in and XLR out and batteries inside. Let me see now, that’s a lot of batteries inside. “Look, the ‘Franken-rig,’ she grows!” I hear you say. 48 volts divided by 1.5 equals 32. 32 batteries? No, that’s just silly. Try again. 48 volts divided by 9 (9 volt batteries, now that’s more like it) equals 5.333. Hmm, it’s the 0.333 bit that worries me. Where’s my pocket knife?

There has got to be another way and fortunately, there is. It’s called the Tascam DR-40 PCM recorder. Several alternative palm sized audio recorders are available: there’s the popular Zoom H4n, Tascam’s DR-100 Mk 11 and the DR-40: a cute little 4 track PCM recorder with two on-board microphones, two balanced XLR inputs, each with ‘locking mechanisms’ to prevent the microphone cable from pulling out and 48 volts of ‘phantom’ power sent up the cable. Now that’s just plain scary!

OK, so I can record ‘separate sound’ with my microphone plugged into the DR-40 and sync it later in post or I could bolt the tiny PCM recorder onto my camera rig using its little ¼” tripod thread and run a short cable from its auxiliary 3.5mm output to the VG20’s unbalanced 3.5mm auxiliary input. This would offer true dual sound recording. Should I ever need to use a field production microphone mixer, the DR-40’s XLR microphone inputs can be switched to accept ‘line’ input levels. That feature alone makes the Tascam DR-40 very good value for money when compared with the alternatives.

PS: Hang-on, I just wrote that the DR-40 can output 48 volts of ‘phantom’ power. “How do they get 48 volts DC out of a little audio box which runs on three 1.5 volt batteries?” I hear you ask. Well that, dear reader is truly the ‘work of the devil’…

Since this was written, Tascam has announced their DR-60D, which we wrote about here, and which we'll be reviewing in full soon.