How to record from a microphone to a computer for voiceovers, podcasts, etc. [Sponsored] 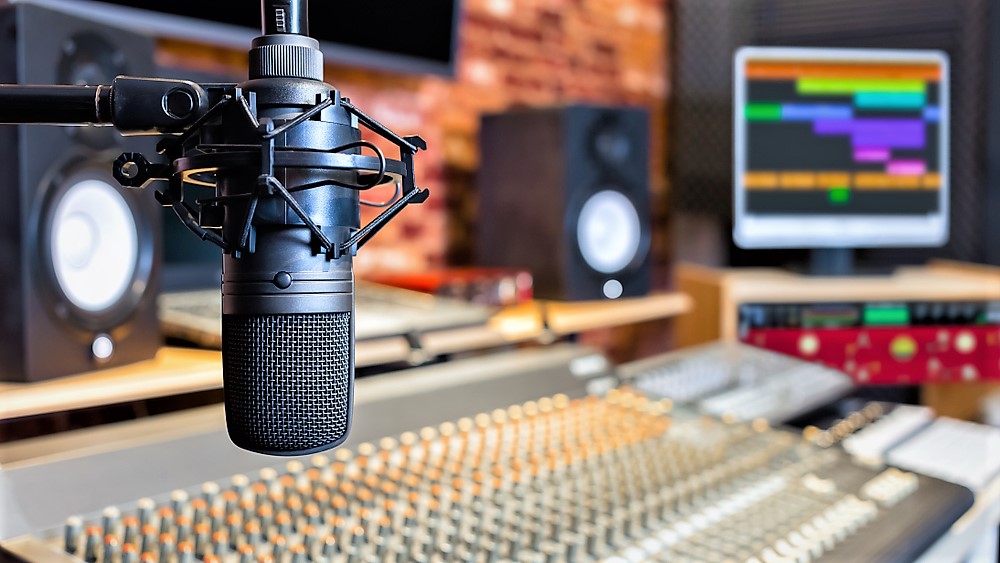 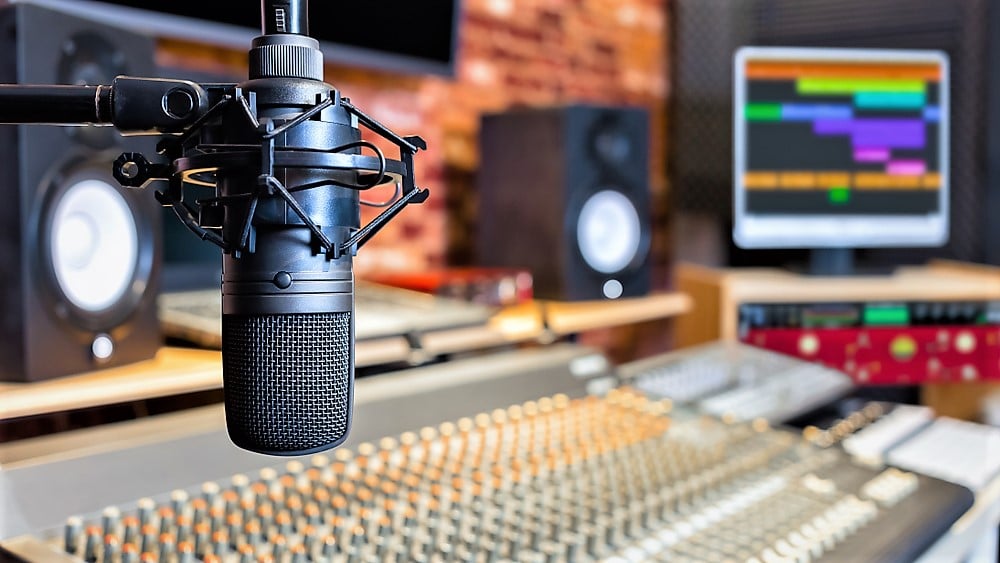 Need to make a voiceover, or even a podcast? Then you’ll need to get audio onto a computer. Here’s what you need to know.

Whatever kind of video you're making — whether it’s studio or desktop recording for voice-overs, dialogue replacement, or podcasts — you're likely to need some kind of facility to record sound away from the camera and in a more controlled environment.

Some tips are fairly obvious. You will, of course, need some kind of microphone. Some, though, definitely won't be. What's really good - but potentially confusing - is that you can mix and match components as much as you like.

In many cases, you can plug a microphone straight into a computer. You'll have to get a microphone that's designed for this type of connection because most professional mics won’t work with a typical computer microphone input.. Take a quick look at the diagram below, which shows the basic components in a computer recording chain. 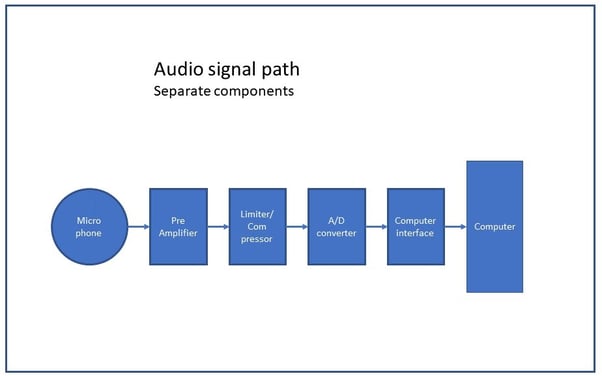 These are the stages in a computer audio signal path

It's worth investing in a high-quality microphone. While there are some fairly low cost ones that will get the job done, think of the microphone as equivalent to a lens, in that you wouldn't expect a great result from a really inexpensive lens, and you certainly wouldn't want your entire production to suffer because you made the wrong investment.

Lavallière microphones- the tiny ones that you see pinned to people’s lapels - can be very good, but they're practically omnidirectional, which means that they’re not very good at separating the sound that you want to record from the noises that you don’t. It shouldn’t matter too much if you’re in an acoustically quiet environment with no reflections, but for voice overs, it's better to have a larger microphone, on a good stand, with sprung suspension to minimise vibrations. You’ll also need a “pop shield” to avoid the “plosive” sounds that happen when you pronounce words with letters like  P, B, T, K, and others.

Microphones only produce very small signals. They have to be sensitive to very small variations in air pressure and that doesn't result in strong signals. Because of that, you always need a pre-amplifier to boost the microphone's output to a more robust "line level" - the standard level expected by most professional equipment.

Mic preamps should add as little noise as possible. This isn't easy from an engineering point of view: it takes careful design and high quality components, so good pre amps can be expensive. There are two easy solutions to this: mixers and interfaces.

There’s a huge variety of mixers available, but what they have in common is that they take multiple inputs and sum them together into a smaller number of outputs. Each channel of a mixer has features that are useful even if you only want to use a single input with a single microphone.  And if you want to use more microphones, say for a podcast with guests, you would definitely want to use a mixer.

If you’re not used to audio mixers, they can seem daunting at first, with dozens of controls, knobs, and dials. The good news is that most of these are duplicated on every channel, so as soon as you’ve understood a single channel strip, you’ve pretty much understood all of them.

Most mixers also have microphone inputs, so they provide pre-amplification. They also provide phantom power if your microphone needs it. We’ve already said that pre-amps are critical, so when you’re buying a mixer, have a look at a few reviews to make sure that you’re getting a good device. Most popular mixers have at least decent audio performance. If you’re specialising in voiceovers and high quality voice recordings, it’s worth getting a mixer with a top specification. Look for mixers that have pre-amps that are derived from high end desks. 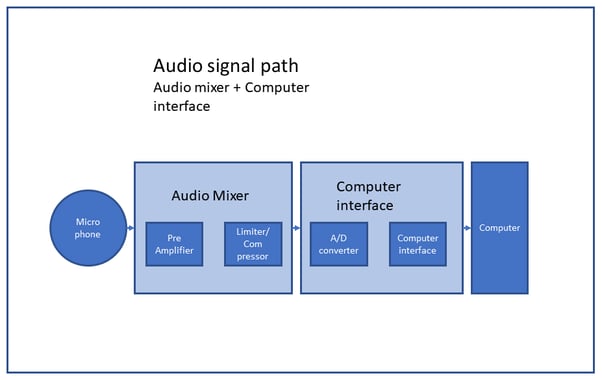 Finally, you’re going to need a way to get your audio onto a computer, which means that it has to be taken into the digital domain. This is not a problem, because computer audio interfaces are plentiful and they’re easy to use. 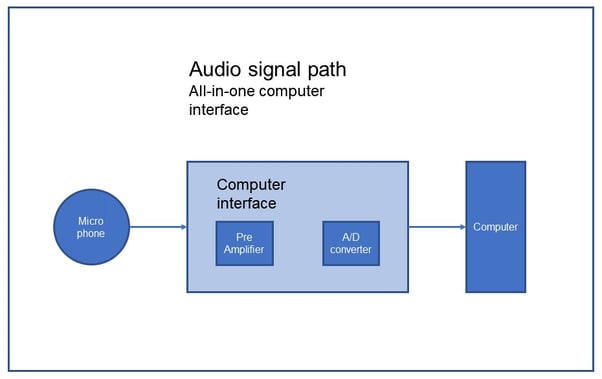 And they’re a good deal, too, because many of them have high-quality microphone pre-amplifiers, too. If you have relatively simple needs like connecting one or two microphones directly to a computer for recording, definitely think of one of these.

USB microphones are all of the above, packaged into a microphone or microphone stand. In other words, they contain a microphone, a pre-amplifier and a USB interface. These are a great idea if you’re mobile and want to record on-the-go- to a laptop with a minimal set of equipment. But you ultimately have less control over your setup.

Finally, you have a choice of topology. You can have a mic/mixer/interface, or just a mic and an interface which includes a pre-amp, or a USB mic.  There is even a third option, which is to choose a mixer with a built in USB interface to the computer - a perfectly valid choice that can give good results but it does come at a bit of a higher price.

Whichever signal path you choose, and however much you invest in your equipment, don’t forget that the basic rules still apply:

Make sure that you capture a good, clean recording in the first place

Try to minimise reflections by recording in a room with curtains, carpets, soft furnishings, etc.

Finally: aim to get your levels right - especially if you use a limiter - while in the analogue domain. Recording in 24-bit resolution will give you more flexibility than 16 bits, but digital recording is unforgiving, Getting things right while the signal is still analogue means that you can use the full digital dynamic range and be confident that even the loudest peaks will be faithfully recorded and reproduced.

Want a good price on the items linked in this article? (or virtually any audio or video product?) Click through to Adorama