An innovative new way for musicians to collaborate

RedShark Review: While collaborative workflows for video have received a lot of attention in recent years, musicians have not had the same attention paid to their needs. Until now.

I’ve been a guitar player most of my life and even believed at one point (I was 15) that I would be on stage, touring the world with a band that would surely rival The Police, U2 or REM. But then the real world set in. Fast forward 35 years. I still play — I own two Stratocasters, a Les Paul, a Fender acoustic and two classical guitars. I love playing, I’m just not touring the globe and selling out arenas.

I play with friends when I can, I record some things for fun using Garage Band to lay down tracks and then share them with friends. Nothing too exciting, but it’s fun and I enjoy it. The music sharing workflow is messy and extremely slow — not ideal for musicians. We want instant feedback. Real-time, if possible. Email or DropBox just doesn’t cut it and it isn’t close to the kind of collaboration I want.

So I began looking into music collaboration software. Essentially, software that lets you collaborate with musicians anywhere in the world. The theory behind the software is simple, but difficult to do well. Getting the feature set just right for musicians of infinite musical styles, instruments and talent is no easy feat.

And while music collaboration is starting to take hold in the music community, the overlap — and the opportunity — with the filmmaking community is significant. There are many similarities between the video and music collaborative workflow. In conversations with both filmmakers and musicians over the past couple of years, I’ve found the pain-points are almost exactly the same. And the workflows are all too similar as well. Email, Dropbox, Google Drive are just a few of the apps used by filmmakers and musicians alike. And these are messy, slow and hardly collaborative. But fortunately for the filmmaker set, the past three to five years have seen the rise of powerful new video collaboration platforms like Frame.io, Wipster and Shotgun, to name a few. But there hasn’t been much discussion about music collaboration. Until now.

One piece of software I’ve been playing with is called Melosity. Melosity is a start-up run out of Dublin by a small group of musicians and software engineers, working around the clock to create something amazing for the global community of musicians. Their followers are truly global and are musicians of varying skill levels — from amateurs and beginners to semi-pro and professionals playing gigs for money.

Melosity is at a fairly early stage and they are just getting off the ground. They’ve built an online, web-based collaboration platform that’s easy to use, intuitive and which has a very clean UI. The feature set is basic and straightforward and isn’t full of bells and whistles. This is a good thing on many fronts, but at times the bare bones nature of the software can be limiting. As a guitarist, my main instrument of choice is my Fender Strat. I usually play clean — the pure sound of the Strat is intoxicating and most of the time doesn’t need any help. 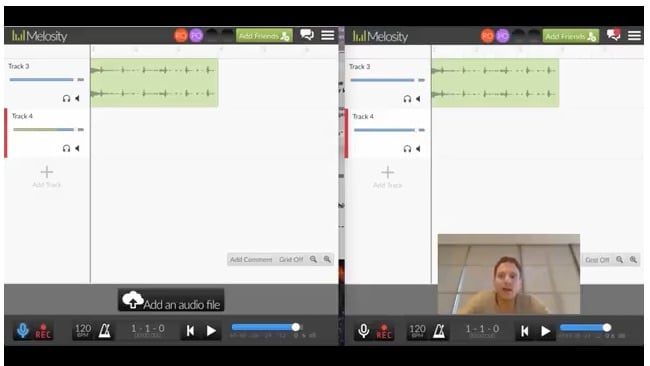 The Melosity interface in action

The workflow is simple as well. I connect directly to either my MacBook Air or iMac desktop, plugging my guitar directly into my computer using an IK Multimedia iRig Duo Pro (a fantastic device that I highly recommend, by the way). But I’m also a product of the 80s, so I can’t help sometimes throwing in a little digital delay or chorus — or if I’m running through a David Gilmour solo, I need some distortion and sustain. There are no digital effects in Melosity — at least not yet. I speak with the founder often and he assures me that everything on my wish list is on the roadmap, but they need to walk before they can run.

At first, I found it a little frustrating. Recording directly into Melosity and feeling like my sound was just a little flat. Not tonally, but it was lacking in warmth or depth. There are no controls to adjust for tone or reverb and as of today, there are no digital effects to spice up your sound. But I found a workaround, one that gives me more control over my sounds before sharing tracks out with other musicians.

Simply record first in your DAW of choice (I use GarageBand), export your track and upload it to Melosity. It’s fast and your track is available to play back online almost immediately (it took me less than a minute to upload a single 4-minute track). Once it’s uploaded, it’s ready to share. While the sharing workflow could be a little cleaner (they’re working on it for an upcoming release), it’s still easy. Hitting the “share” button generates a link to your project, which you then email to whomever you wish to invite to the project. You can also share the link on Facebook and invite people there. And you can invite as many musicians to the project as you like.

There are chat and messaging capabilities that enable musicians to make comments and suggestions as they’re collaborating on tracks. And when you’re done, simply download the final mix and you have your score. For filmmakers already collaborating on the video files of their projects, the ability to now drill into the score and collaborate on the track level, I believe, is invaluable.

Melosity is a free service for now. The company is actively developing the software, making improvements and adding features. They are also very actively engaged with their users and are making smart use of social media to tap into their customers’ needs and wants. What I like most about Melosity is that these guys are for real. They are musicians passionate about creating a global community of musicians. They understand the pain points, they know what musicians need and they’re putting all of their efforts into connecting with their customers and implementing their feedback to make Melosity a success. When you put customers first — and not features — you have a winning formula and I believe Melosity has a real shot at this burgeoning market.

For more information take a look at the Melosity website.