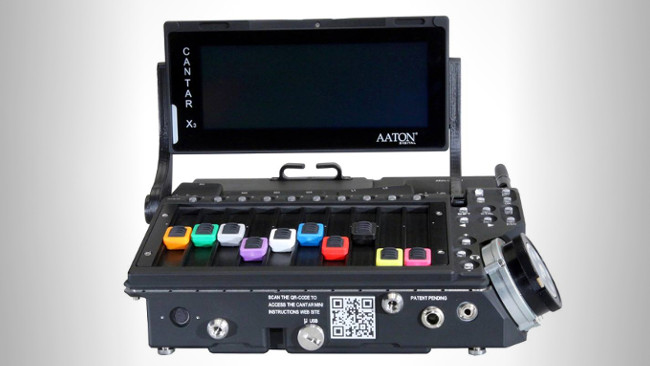 High-end ergonimics, high-end price. The company famous for putting a cat on your shoulder has announced a scaled-down version of its high-end Cantar X3 audio mixer-recorder.

Aaton's history as a manufacturer of film and TV equipment dates from the company's founding in 1971, making it a lot younger than some of the big names of the field. Nevertheless, the company has established an enviable pedigree in the part of the market that likes things to be lightweight and easy on the user. The famous phrase (famous enough that it won't be new to most people) is that its now-historical cameras were designed to perch on the shoulder like a cat, although in reality Aaton cameras were a lot more comfortable than that. Cats have claws, whereas the Aaton 35-III is one of the few film cameras that's actually nice to handhold without adding its own weight in accessories. Film camera people can often have rather low standards for this sort of thing, but Aaton's approach should satisfy the pickiest ENG specialist.

The company has a reputation for placing the controls where the operator's hands will simply fall onto them, as well as building things without worrying too much about costs. Aaton has been making the Cantar series of audio mixer-recorders since the mid-2000s and the dedication to ergonomics remains evident throughout. The layout of the first Cantars began fairly conventionally, recalling the layout and even the finishing style of classic reel-to-reel tape recorders. The brushed metal and circular metering (since replaced by a TFT display) has an almost 1960s look. At that stage, they were sometimes considered a little lacking in configurability, being reliant on their (beautiful) manual controls, although more recent models have become fully microprocessor-based. As the line of products grew, controls and displays were shifted around and placed at angles which look slightly strange and chaotic, until they're handled in person, at which point it becomes clear how well the whole thing works.

The problem with all this is, of course, cost. The current flagship Cantar X3, which should win any available award for its lumpen yet purposeful industrial design, sells for about $16,500 in the US. Yes, that's right, sixteen and a half thousand dollars for a 24-track recorder. It has a lot of inputs, with eight mic and eight line inputs plus digital options. It is, at least, rainproof. It is of staggering quality, using parts made of unicorn horn and polished with angels' breath. Nonetheless, that's a price which makes a purchase difficult for some people, regardless of how lovely it is. Recognising this reality, Aaton has just announced the Cantar Mini, a 16-track recorder of comparatively diminutive dimensions, but which retains many of the X3's benefits. It was launched at the recent BSC show, where the company also began accepting orders, with shipping promised in a few months.

It's as well to take Aaton's idea of a lower-cost option in the context of the company's overall approach, as the Cantar Mini lists for $8,156 at some retailers offering preorders, although that may not represent the actual manufacturer's price (and is dependent on currency rate conversion). The fact that the Cantar Mini retains many of the features of the full-size X3, such as the magnetic faders and general layout, means that it'll almost certainly remain a high-end option, but that's almost reassuring. Something has to define what good means.