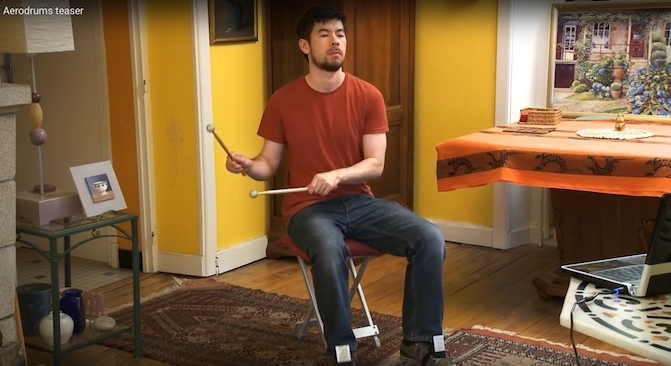 Long regarded as the outcast of the musical community because of their sheer, well noise, the motion captured Aerodrum kit could solve drummer’s sociability problems at a stroke.

Muffling and muting drums has been a challenge for years. As a teenage drummer I remember buying thick rubber pads for my toms and trying all sorts of gaffa tape combinations on my cymbals to try and keep the decibels down: all to no avail. Not only did they not quieten things down enough but what you were left with a) didn’t respond like a normal kit and b) certainly didn’t sound like one.

Electronic kits sort of solved that problem and, over the years, have evolved to become very sophisticated replicas — arguably in some cases an even better alternative — to acoustic kits. The introduction of mesh heads all round the toms has greatly revolutionised their feel and, once you’ve had fun mapping different sounds to different active areas of the kit, an acoustic set seems almost prehistoric by comparison. What do you mean there’s no cowbell sitting on the rim of my 16in floor tom?

The problem is that a robust enough kit to gig with is as expensive as a good quality acoustic kit with decent cymbals and, if noise is a sensitive factor, they’re still not silent. All that double kick drum work still sounds like thunder to anyone else in the house, especially if they’re on the floor below, and you’re still hitting things with sticks. The sounds they make might be electronic samples, but there’s still physical impact noise to consider.

All of which helps to explain why Aerodrums are quite as interesting as they are.

Essentially this is realtime motion capture taken off of the computer animation industry and mapped onto the musical one. The ‘kit’ exists virtually on a computer while a Sony Playstation 3 Eye camera captures the drummer’s movements from reflective straps on the feet, which can map onto as many pedals as you have space for them, and bulbous balls on the end of the drum sticks.

The result is genuine air-drumming with an impressive degree of responsiveness (Aerodrums says it supports 16 different levels of openness for the hi-hats and uses as many as 58 different sound samples for a given openness level, per hand) and, from what we can see on the video, zero detectable latency.

It’s MIDI compatible, you can add your own samples, and all in all it looks like a blast to play: genuine air drumming at last. Apart from not being able to be played outdoors — the motion capture relies on reflective light after all and the sun is a bit of a competitor in that field — the main limitation is that you’re not actually hitting anything and you need to master a looser style of grip so that the base of the stick rebounds against your own palm to speed up rebound. There’s also no way to pull off rimshot and bow and edge hi-hat hits easily, though the system can respond to different strike speeds and thus you can set off rimshots with accented hits if you so desire.

Apart from that it seems it’s up to you. You can build kits as big as you like if you can guarantee you can hit a patch of air time and time again with a degree of accuracy, and all of them will be functionally silent until you turn up the volume. The neighbours might finally have reason to rejoice and it’s definitely going to be a great way of learning new material and keeping yourself in trim between gigs (or even kits in this drummer’s case). Aerodrums even says people can gig with them providing the stage is lit properly. Now, about those air guitars…