What does vinyl for sale in supermarkets tell us about the future of the format? 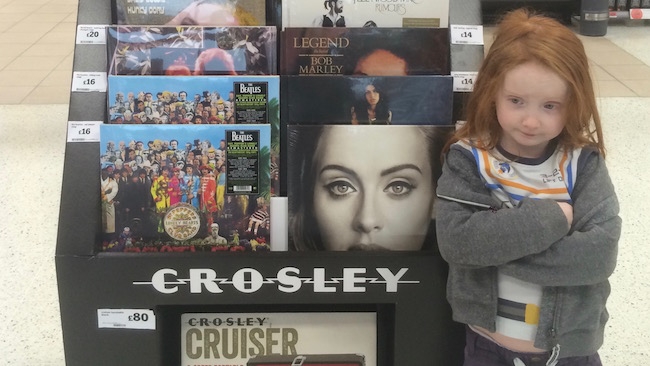 Winning over some consumers is not easy

I took this picture last month in a large Sainsbury’s on the outskirts of Leicester. Myself and my daughter walked in and there it was: a cardboard tower of vinyl.

The photo is slightly cropped — other offerings on sale included Led Zep II and IV, Nirvana’s ‘Nevermind’, AC/DC and The Specials, indicating that the display isn’t trying to cast its net stupidly wide in limited space — but you get the point; this is one of 171 stores chosen by the supermarket giant to start selling vinyl to unsuspecting shoppers.

Sainsbury’s points to figures saying that demand for the format grew by over 60% in 2015 and a massive 70% in the first quarter of 2016, so it’s definitely surfing a wave. The fact that it also shifted 300,000 copies of Adele’s 25 on CD also means it makes sense to offer an LP version too. And the Crosley Cruiser, for all its many sonic limitations, has proved wildly popular.

It all works on paper. However, you can’t help thinking that 2 + 2 in this case don’t necessarily make 4. Displays like this one feel like the sort of thing that is wheeled out for Father’s Day or Christmas; impulse buys for shoppers needing to score a present quick, not an attempt by the store to make a serious play for the audiophile market.

Sainsbury’s, of course, says otherwise. “We don’t see this as a novelty gifting fad but a complimentary part of our existing music offer with a long term future in our stores.,” commented Pete Selby, Sainsbury’s Head of Music and Books. “It is our aim to make the vinyl experience easy and pleasurable for our customers who are ready to re-engage with a format that resonates with them on an emotional level.”

All of which is fine, but you try telling a five year-old what these strange objects are and how it all works and, as you can probably tell from the expression, they don’t believe you and rather wish you would stop going on about it.