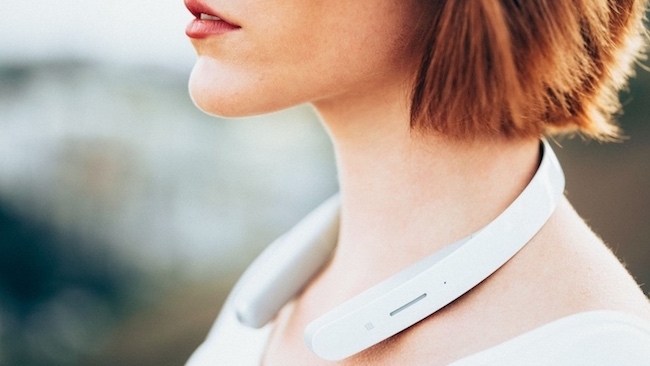 Headphones and headphone audio quality have been a bit of a hot topic of late, but Sony’s complete reimagining of the technology behind them and their method of delivery definitely borders on the outlandish.

Created by its Future Lab Program and unveiled at SXSW, this is more the headphone as a wearable rather than a specific audio device.

Displayed under the codename Concept N, they sit on the neck like an old-fashioned torc and and use directional speakers to get the music up and around your ears without anything as vulgar as buds or over the ear pads getting in the way.

The idea is that you’re not isolating yourself from the ambient environment and can listen to what you want whilst, for example, not being knocked off your bike by the taxi you didn’t hear coming up behind you. Even the cone-shaped ear pieces that communicate with the necklace and can be used to provide a more conventional headphone-type experience have holes punched through the middle to blend the inner and outer aural environments together.

Interestingly, the Concept N unit shown at SXSW also came with voice control and a camera, making it a bit like a cut-down Google Glass style wearable: less obtrusive certainly, and also presumable able to pack in more hardware (a heavy necklace being much easier to accommodate than a hefty pair of glasses). And reports from the show also say that the directional speakers both worked quite well and also didn’t drive everyone else mad around them.

It’s hardly going to appeal to the audiophile section of the market, but you never know, for all the raised eyebrows Concept N caused at the show Sony could be on to something here.