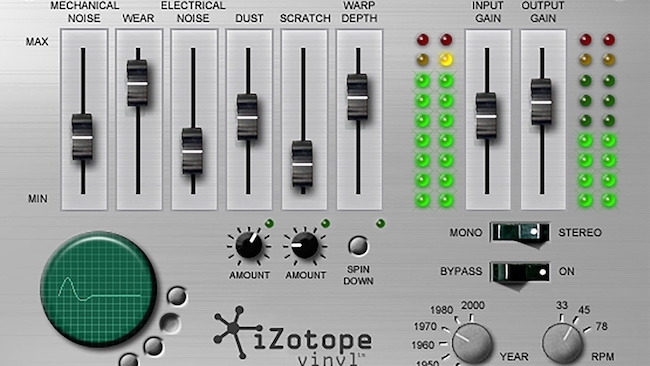 All vinyl 'imperfections' can be regulated

For all those missing the pops, scratches, crackles and more of vintage records and record players, Izotope is rereleasing a free and enhanced version of its Vinyl plug-in as part of its 15th birthday celebrations.

Billed as the “ultimate lo-fi weapon for anyone looking to add the dirty, dusty feel of a different era to their sound,” Vinyl was iZotope’s very first product back in 2001, and the new version of the software has been suitably overhauled so that it is 64-bit compatible on both Mac and PC. The list of supported formats has also been expanded to include AAX and VST3.

There is also a new Spin Down button that simulates slowly stopping the playback of a record, giving results that can apparently range from a dramatic full stop to a subtler nuance on an individual instrument. Dust, scratches, crackles, pops, and the warping of a worn record can all be simulated, as as well as the mechanical noises of a turntable.

Back in the day, the novelty of a free digital effect that offered flexibility over analogue sounds made the plug-in a success and it was used extensively on songs, soundtracks, films, games and more. And while since then we’ve seen the establishment of a near mass-market analogue scene again — forecast the trend for 180gsm releases in 2001 and you might have been accused of being on something — Vinyl the plug-in still remains a lot quicker and a lot more controllable to use than vinyl the LP.