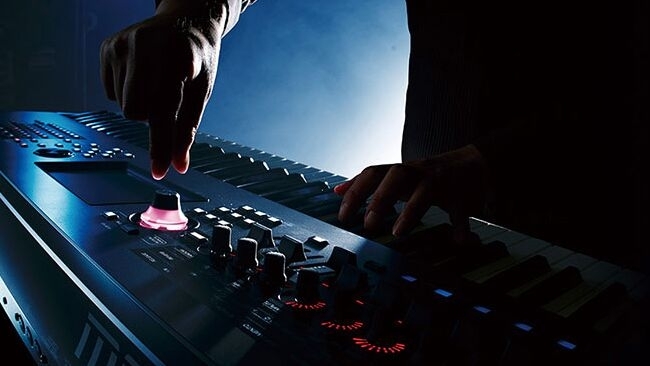 The Yamafa Montage: a genuine game-changer?

There are three reasons why the Yamaha Montage, released at NAMM last month, could be a genuine game-changer as far as synths go.

Keyboard "workstation" synths have always been a good option for live musicians. They often contain rudimentary sequencers, but the best aspect of them is that they have a wide range of sounds that can be layered and quickly called up for live performance.

I still have the first ever keyboard workstation, the Korg M1. It still works, 27 years and 384 gigs after I first bought it.

So I'm pretty familiar with the genre. Which is why, to me, the new Yamaha Montage seems like a game changer. (Others might disagree. It's not like there's been a shortage of synths in the last quarter century).

Only just released at the at the NAMM show in LA this January, the Montage is notable for at least three things.

It comes with two independent sound engines: AWM (Advanced Wave Modulation - Yamaha's main type of synthesis based on sample playback and various types of filter and modulation) and FMX. Yes, that's the same FM as used by the legendary DX7 from the early Eighties. I guess it's been included here because there are just some sounds that it does better than any other method of sound generation. But of course this modern incarnation sounds better than ever, and you're not restricted to just sine waves as oscillators - Yamaha includes several other waveforms for you to use as well, although I must say that I thought the whole point of FM synthesis was that you used sine waves as a basis. Apparently the implementation of FM is
so accurate that you can load up original DX7 patches.

I'm not sure what the total polyphony of the Montage is but I'm assuming that because each of the two independent sound engines has 128 note polyphony, that the total is 256 notes. This is obviously far more than the number of keys on the keyboard but the point is that it will give you an incredible ability to build up layers, and you will never encounter "note stealing" when you're playing a fast run of long-delay sounds.

An extraordinary degree of control

With such a large palette of sounds to draw from, and a very large number of effects to choose from, the potential for confusion is enormous. It looks like Yamaha has designed the montage to be usable by gigging musicians who are willing to put a lot of preparation into their performances. For example, it's easy to call up any preset and access it from a "live" screen, where you can group all the sounds for your set, complete with notes about the sounds themselves.

There are loads of "performance" controls. There's the "Super Knob", a giant, unmissable knob with a light that throbs with the tempo. What's "super" about this knob is that you can control multiple parameters with it - increasing some and lowering others at the same time. If you don't have a hand free, then you can link it to a foot pedal as well.

The Montage is configured as a multi I/O audio interface and this opens up the possibility of integrating the keyboard performance with computer playback or even live audio. For example, you can put a mic on the drummer's bass drum and use it to "key" a sound on the Montage, so, for example, you could arrange for the bass drum to "duck" a pad sound that you're playing.

I've struggled to find a really good demo of the keyboard. Too many of them focus on dubstep-type EDM sounds, which are cool, but not needed much in everyday use.