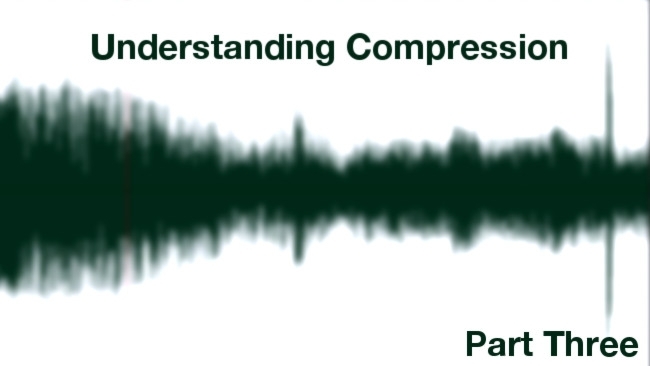 In the previous articles of this series, we covered compression types and their benefits. In part three, we discuss how to actually use them. By Shawn Skead.

When it comes to plugins, it seems like it is up to the designer as to how each knob, slider and button is labeled. Thankfully, when it comes to compressors, designers usually stick to tradition, with only small variances.

Firstly, nothing happens until we adjust the 'threshold'. This is the difference between the compressor being effective versus ineffective.

If the threshold is cranked, the comp is doing very little to the sound. As we work towards minimum, audio gets louder and we hear the compressor working. The threshold control is kind of tricky because it works in tandem with the 'Ratio' knob (more on this below). Basically, we are telling the compressor when to "get to work" and when to "take a break." This is usually the first thing we need to figure out and the first place I go when attempting to compress.

So, if we start with a ratio of 2:1, that means if the incoming audio changes in volume by 2dB (louder), the output will only change (get louder) by 1dB.

It makes sense then that if we had a ratio of 8:1, that means the volume has to increase by 8dB, but overall output is only going to change by 1dB. We can logically deduce that if the ratio is set to infinity (or a high setting like 20:1), the music has to change quite drastically in volume in order for any compression to actually happen.

In practice, when we look at a waveform and everything looks relatively smooth except for a few spikes popping up to 0dB and beyond, what we need is a higher compression ratio to catch that spike. With a high ratio setting, we are now effectively creating a 'brick-wall' limiter, which is only going to catch the highest of peaks and leave everything else alone. If we still can't control the spike, we likely need to go back to the threshold control and bring it slightly lower than where we had before, so the compressor knows it needs to try a little harder.

The interplay between threshold and ratio is an good starting point.

With a really fast 'Attack' time, transients/spikes/peaks (all synonymous) get controlled quickly. This means the compressor is going to catch those spikes.

Attack is measured in milliseconds, so the longer the attack time, the slower the compressor is to react to those spikes.

Some of the sharper knives in the drawer might immediately ask, "Why on Earth would I want a slow attack time? Isn't the point to get those peaks under control?"

In some cases, you actually want some of those spikes to come through, simply because things sound sharper and punchier when they are allowed to pass through.

For example, a well known trick when recording snare and kick drums is to set a slower attack time. This allows the crack or the snap of the drum to come through, from the initial strike of the drum, while compressing and controlling its decay, making it sound louder and punchier overall without compromising the rest of the waveform.

Release is also a really good word to describe what the compressor does after it has 'caught' that spike.

If compressors could speak, they would say: "How fast do you want me to 'let go' of that spike, after I've caught it?"

A compressor can be instructed to quickly catch the spike, then stop working, or it can be told to catch the spike and slowly lower the volume, meaning the rest of the waveform is given a little volume boost while the compressor releases.

Because of it's ability to 'hang-on' to sound before it slowly brings the volume back down to normal, we have to be really careful with that release setting, because it can introduce a concept that we don't want called 'Pumping and Breathing'.

Pumping and Breathing (It's not what you think it is!)

Imagine that you recorded an actor with a noisy electric fan in the background. I recreated this in Example A.

With a release set too high, we see that when the actor pauses between his dialog, the compressor is confused and brings up the volume of the background as well.

If you listen to space between the dialog (mostly noticeable at the beginning and end of the sample), you hear the motorized fan being amplified as well. This is called the 'Noise Floor' and if it is set too high or the release time set too long, unwanted pumping and breathing takes place. Some compressors have a special control called 'Floor' or 'Noise Floor', which gives us better control over that.

What we really need is a faster release time, so the compressor stops working when the actor pauses between his dialog.

If you are working with music, often the release time can be calculated. If I know the tempo of the music, I can pull out my calculator and actually figure this out in milliseconds according to quarter notes, eighth notes, etc.

Example B has a little bit of limiting on it, and not much else. Example C has had its noise floor cranked, with a release time set close to it's tempo. Don't worry if it's difficult to distinguish between the two examples; this is where practice comes in. To my ears, I believe the second, heavily compressed Example C seems to groove a little bit more and the percussion seems to hit a little bit harder, even though technically they have the same average volume level!

Just for fun and educational purposes, I made Example D, which has been compressed to the extreme. This is called 'Maximization'. You may notice the distortion is really obvious on the kick drum; in fact, the very first kick at the beginning of the sample doesn't even sound like the same instrument as the original!

In the final fourth part of this series, we will talk about all the hoopla around maximization, the 'Loudness Wars' and discuss where you can find cheap, and even free compressors to employ into your work flow!