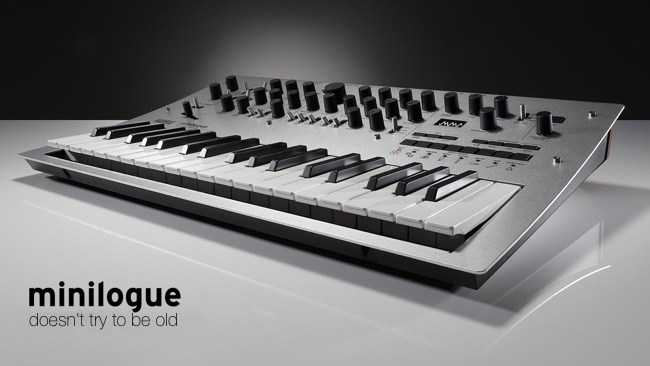 This new analogue synth has something novel up it's sleeve: it's novel!

There’s no shortage of small recreations of classic synths. They’re often well priced but somewhat compromised by small keys and rather plastic construction - but something has to give in the name of affordability.

But what we haven’t seen so far is an analogue polyphonic synth that doesn’t simply imitate something that’s gone before. That, for me, is the compelling thing about the Korg Minilogue. Well, that and the lovely matt aluminium panel that adorns the generously large front of this keyboard.

We haven’t seen it in the flesh yet. In fact it was announced a few days before we launched RedShark Sound. But it’s going to be a “must see” at NAMM. We hope to get one for review soon. That’s if we don’t buy one first.

Since we haven’t seen it, we can’t really comment on it very much, except to say that it’s a lovely looking beast. Highlights include an OLED display that defaults to an oscilloscope - a first, we think, for a commercial keyboard.

Of course, the whole device isn’t analogue, but in a sense, you get the best of both worlds: the analogue sound, but also the benefits of digital control.

It’s only four voice polyphonic, but you’re given a number of different ways to use the oscillators: in pairs, all in unison, as a pre-set chord, or with four note polyphony.

At the price, $500, it’s a complete no brainer. I’ve got big hands, so I’m not a fan of those smaller keys, but you can always connect a full size keyboard controller to turn it into a fully playable synth for people like me with fingers the size of cucumbers.

Or, you could just stare at it. It really does look that good.