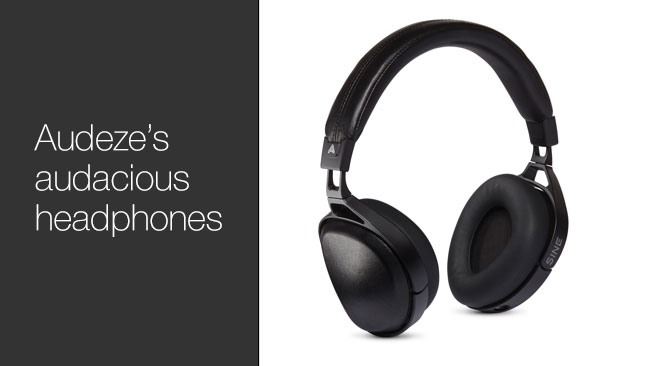 We review the Audeze Sine headphones, a closed back, mobile-friendly design that gives products from more well-known brands a run for their money.

Audeze, founded back in 2008 and a relative newcomer to the world of high end audio, has quickly made its mark on the market's consciousness. Its planar magnetic headphones have been gaining enthusiastic reviews since launch, and along with Oppo and HiFiMAN, have succeeded in bringing this style of design back firmly into the spotlight.

Yamaha popularised planar magnetic headphones back in the 70's which they at that point referred to as Orthodynamic designs, which by their very nature offer a few natural benefits for sound playback.

This headphone design works on a similar principle to dynamic drivers found within conventional headphones, using the interaction of two magnetic fields to cause motion. In the dynamic driver design, there is a central moving coil within the driver which pulls the diaphragm; in contrast, the planar design spreads the charge across the whole driver.

The driver mechanism in a traditional planar magnetic headphone is based around a very thin, flat diaphragm that contains electrical ribbon conductors that are set in motion by electromagnetic induction by the mirrored arrays of magnets, which are arranged so as to produce a consistent magnetic flux across its whole surface area. This spread in the force being applied to the speaker diaphragm gives lower levels of distortion than a moving coil design, as well as a tendency towards a tighter transient response.

The recent resurgence in planar headsets, however, is largely down to breakthroughs in materials and design methods over recent years that have allowed the various players to downsize and improve on those ribbon style drivers. The catalyst for Audeze, in fact, came when the company met an engineer who developed specialized flexible circuit materials for NASA. This engineer had developed a design that Audeze felt could be successfully adapted for use in speaker drivers. The resulting combination of a proprietary planar magnetic transducer (and being able to employ ultra-thin voice coils across the diaphragm) would allow for more control and efficiency in the design, whilst simultaneously reducing the weight when contrasted with older construction methods.

In some regards, it could be noted that planar designs share some characteristics in common with the top of the line electrostatic designs found in various high end models like the Sennheiser Orpheus or the Stax range, whilst still retaining the ability to be more easily driven and so straddle between the worlds of consumer and serious enthusiast.

The larger Audeze models have made a name for themselves in regards to their ability to deliver a clean, accurate sound reproduction with great spatial positioning. The larger LCD range of over ear headphones feature 106mm transducers and they succeed in delivering a wall of sound to your ears that delivers a speaker style sound stage whilst using headphones. From crisp highs to deep accurate lows, the LCD range has been loved by not only enthusiasts, but also many working producers and mastering engineers who want a detailed secondary monitoring reference that is accurate and familiar, wherever they happen to end up working.

Last year, Audeze partnered with BMW Designworks and brought the more affordable EL8 to the market, with their first closed back option, other than the high end LCD-XC model. The EL8, whilst having the closed back option (which makes it more amenable to being used in public), also comes with a set of 100mm transducers, ensuring that the result remained a large over ear design that still didn't quite lend itself easily to mobile use.

This year, Audeze has looked to take its range ever more into the consumer spotlight with the world's first on-ear planar magnetic design, aimed squarely at users who want high end audio reproduction on the move.

The first thing that strikes you, if you've ever handled Audeze headphones or indeed any other planar design previously, is the weight, or the lack of it. At 230g, the Sine headphones are just over half of the weight of the EL8's and even less than regular dynamic headphones, like the AKG 712 or the Focal Spirit Pros. This reduction in weight comes in part from a reduction in driver size, with the new design measuring 80 x 70mm, with the drivers themselves residing within a sleek leather backed housing in an almost understated design, especially when compared with the wood finish and metalwork found further up the range. The headphone cable connects on both cups via angled mini-jacks and does a good job at sitting flush with the cup itself. This is finished off by a padded headband design wrapped around an aluminum frame that manages to clamp with enough pressure to ensure a solid fit, whilst not being so tight as to become irritating over longer listening periods, giving a rather comfy design overall.

So how do they sound?

On first trying them, I went with a few portable options, running them from various mobile devices with some interesting results that quickly showed that these headphones could easily take whatever those devices could deliver. The stereo field comes across as narrow, compared to a good set of open backs, but this is always going to be the limitation of a closed back design. The stereo field that is presented, however, is well balanced and delivers a lot of well positioned and detailed information to your ears. In testing with the mobile devices, the midrange tended to be delivered effortlessly clear and, whilst plenty of detail was also presented in the top and low end, it could often feel a little relaxed.

Plugging the Sines into a headphone amp, however, allows us to give it a bit more power to play with, which really makes them come alive with an extra energy and depth being added to the presentation. Owners of Apple devices with lightning connectors can benefit from adding the Cipher cable, first introduced with the EL8 Titanium model, which houses its own compact dac & amp combination, perfect for driving these headphones optimally whilst on the move.

In critical listening, one thing becomes clear. These headphones can be rather unforgiving on poor sound recordings. Audeze has always striven for clarity and quality in its sound reproduction and the Sine continues this tradition well, meaning that, whilst there really is nowhere for a bad mix to hide here, it does also mean that well produced material can really shine through.

When driven, the low end response is tight and focused, the midrange is detailed and responsive with the high end being well defined and clear. Where some headphones sound hyped and exciting at first, they also tend to end up sounding fatiguing to the ears over longer sessions, which is something that the voicing of the Sines clearly aims to avoid.

Place in the market

The closest comparison is possibly within the Audeze range with the closed back over ear EL8's, its larger transducer giving a slightly deeper response and wider soundstage, although at the cost of added weight and physical bulk. Looking at the wider market, the Beyerdynamic Tesla range would be great to audition against, with the on ear Beyerdynamic T 51p model being acknowledged amongst the best in class. However, it's possibly the bigger over ear 1770 DT Pro's that are closer to the Sine's delivery, where the warmer sound that the Beyerdynamics present could prove an interesting contrast to the Sines more clinical definition.

Any real criticism here largely comes down to the limitations of the closed back form factor. What the Sine does offer is a headphone that meets these challenges and has surpassed many expectations for its size.

With a street price of £399 / $450 currently, the underlying question has to be one of how do they compare at that price point? They come off as strong contenders, holding their own against larger opponents. Whilst still maintaining that size advantage, their unique stature makes them solid choices to audition, whether you're after premium on ears or simply comparing the best models around that price point.

They may not prove to be the headphone for everyone, especially as some listeners may find themselves looking for more sonically boisterous and colourful options. However, for those who want accurate, faithful sound reproduction in a compact and portable package, there is certainly a lot to appreciate about the Audeze Sine headphones.