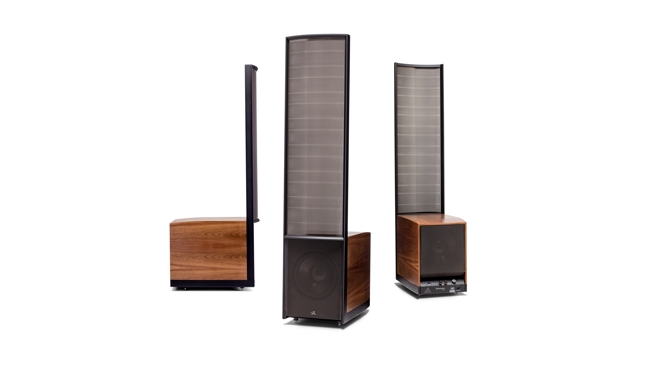 MartinLogan has just released three new models of electrostatic speaker, ranging from the expensive to the very expensive, that are intriguing examples of an intriguing technology.

Electrostatic speakers have often been thought of as a niche product. Still, they have, for decades, continued to fight off the enormous research and development put into conventional dynamic speakers which might easily have swamped other special-interest technologies. The particular advantages of electrostatics are such that MartinLogan's new products, the ESL 11A, 13A and 15A, and the entry-level ESL X, are best understood given a bit of background into how the technology works.

Sound is motion in air. The best-known way of turning electrical signals into motion is using magnets to push things around, which is an application of the trick we all did in physics lessons. Wrap a piece of copper wire around a nail, connect it to a battery, and a magnet is formed. The problem is that the energy involved has to move both air and the mechanical parts of the device itself. Either the wire or the nail (a large magnet in a speaker) is heavy. Heavy objects have inertia, so if we just apply the audio signal to the magnetic coil, it won't precisely follow the shape of the audio waveform. Some of the energy will be used just accelerating and decelerating the weight, creating distortion.

The most common workaround is to use a combination of various speakers, where the smallest provide precision at higher frequencies and the larger ones are needed to move enough air for adequate bass response. Clever electronics have made it possible to greatly optimise the performance of magnetically-driven loudspeakers, but there are no perfect fixes.

Electrostatic speakers use a force other than magnetism to move the air around. Most people are aware that opposing electrical charges attract one another, but actually building a speaker using this technology is complicated by the fact that the electrostatic force is small. High voltages must be used in order to create sufficient mechanical action. The construction of an electrostatic speaker is generally three-layered, with two grid-like electrodes at the front and back through which sound can escape, and a conductive diaphragm in-between. Applying a high voltage between the diaphragm and an electrodes causes the diaphragm to move.

Crucially, the diaphragm can be extremely lightweight. Plastics such as PET or polyester are often used, conductively coated, and the resulting diaphragm needs only tiny amounts of energy for movement. Electrostatic speakers are therefore capable of very low distortion, and this is their principal advantage. Also, a flat sound emitter has some advantageous properties in terms of directionality and stereo imaging. Curvature of the panels, as applied by MartinLogan in their Curvilinear Line Source design, sacrifices a small degree of imaging precision to make positioning of speakers and listeners less crucial.

The downside is that electrostatic speakers generally don't have the bass response of dynamic types, partly because of phase cancellation. The mathematics are equivalent for both electrostatic loudspeakers and dipole radio antennae, with the physical size of the panel an important factor. Because of this, many designs are paired with a conventional dynamic speaker to reinforce bass. MartinLogan's ESL 15A uses two 12-inch, and the ESL 13A a pair of ten-inch drivers in a ported chamber below the electrostatic main event, while the 11A and ESL X use pairs of eight-inch speakers.

Happily, it's in the bass regime that the compromises of a dynamic driver are least noticeable, and the combination is a straightforward choice which should provide precision and power at all frequencies. The company applies the clever electronics we talked about before, in the form of their Vojtko DSP Engine, to the conventional bass drivers in their electrostatic series. This allows their behaviour to be optimised with respect to the higher-frequency reproduction offered by the electrostatic elements of the system, and to the room in which it is deployed.

There will always be a tangential degree of interest in electrostatic speakers because of the design possibilities they create. They generally avoid a need for bulky cabinets and in many cases they can be somewhat see-through, as with MartinLogan's designs, making for a lightweight appearance that doesn't dominate domestic circumstances in the way that a similarly high-performance conventional design might. Such a front-room configuration is, however, not for the light of wallet.

The new ESL 15A, recommended by the company for amplifier power from 20-700W per channel, costs £24,998 a pair. The ESL 13A (20-600W/channel) clocks in at £14,998, and the ESL 11A (up to 550W) at £9,998. The ESL X, at a shade under five thousand pounds, provides an entry to the technology per channel at (comparatively) low cost, handling 400W per channel. The justifiability of the price tag really comes down to the owner's ambitions for both sleek design and high performance, though it is certainly a heady combination.