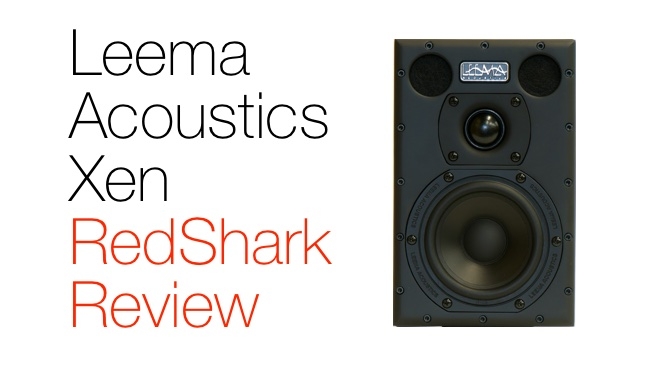 It used to be a reliable rule of thumb that if you want a big sound from a loudspeaker, then you need a big loudspeaker. This is certainly still true of typical loudspeakers on sale. Buying a floor-standing loudspeaker instead of a bookshelf model can easily give you an extra octave of bass. But if you want bass that’s going to rattle the windows and shake your stomach, then you’ll probably need a subwoofer, or a much larger loudspeaker.

With the diminutive Leema Acoustics Xens, you don’t get bass that resembles an earthquake, but you do get quite astonishingly high quality at the lower end for the size of speaker. And that’s just the beginning of their talents.

The little loudspeakers have been designed with accuracy in mind. Originally thought of as near field studio monitors, they have found their way into living rooms too, and with good reason: their ability to create a crystal clear soundstage.

I’ve been using them for a while now and one thing about these speakers never wears off. They sound amazing, but there is something more specific than that. When you start with a good recording (I can’t overemphasise how important this is!) there is a solidity and a kind of shimmering clarity to the sound. You hear things you’ve never noticed before, not because they weren’t there in the recording, but because they weren’t there in space.

Stereo is there for a reason, and that reason isn’t so that you can hear a tennis ball bouncing right and left in front of you. You could achieve that unambiguously with a pan control and any pair of speakers.

What you get with the Xens is a solid, clear image of the instruments in an orchestra. It’s not so much that you can hear exactly where each sound source is on the stage; you can certainly do that, but it’s more that you can hear each instrument in its own space, with room all around it. It’s as if the loudspeakers are somehow conspiring to decode the information in the stereo audio better than anything else you’ve heard.

There’s a reason for this, I think. It’s that the designers of the speaker, Lee Taylor and Mallory Nicholls, have thought intensively about the crossovers and how they handle phase information. This is so often an area that’s neglected, and probably that’s because it’s so complicated. But with the Xens, it’s just right. I’ve spoken to a few people who either have or have borrowed these speakers and they all say the same thing: the stereo image is superb.

Such accuracy has its downside. When audio is compressed (using MP3 or any other codec that doesn’t allow lossless compression) the first thing to suffer is the stereo image. The relative positions of the instruments (or tracks in a panned multitrack recording) can certainly be heard, but the wealth of information about the individual sound sources that was captured in the original recording is largely lost. So that means that you hear the difference on the Xens. Music from Spotify - across the spectrum - sounds dull and lifeless, and somewhat nasal - compared to even a humble CD, which is, of course, uncompressed.

The Xens are made from steel. They have more screws holding them together than you’d think reasonable. It’s this internal rigidity that gives them such an authoritative voice. You have to compliment this with solid speaker supports and good quality cable.

With high resolution audio (i.e. higher sample rate, 24 bit and DSD) the Xens excel. It’s tempting to say I haven’t heard a better stereo image at any price. There probably are speakers that will better these, but they won’t be cheap, and they certainly won’t be small.