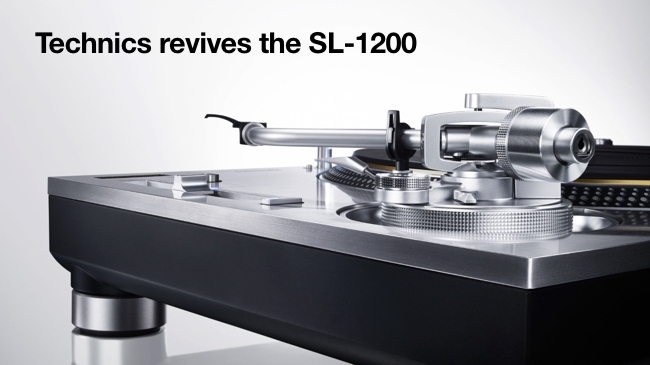 Technics revives the SL-1200 Direct Drive Turntable. And the surprising thing is that it's not really surprising

Perhaps the biggest sign that there’s a big vinyl revival in full flow is that Technics has a new generation of its fabled SL-1200 turntable. The new models, one a glitzy “50th Anniversary Limited Edition” called the SL-1200GAE, and the more prosaic SL-1200G, are a modern take on the direct-drive turntable classic.

Technics sums up their reasoning in a short passage on their website:

"Due to the widespread use of CDs, turntable systems disappeared briefly from the market, but their warm sound quality is bringing them back. The direct-drive turntable invented by Technics is still highly acclaimed by audiophiles and DJs in the form of the SL-1200 Series, and there have been many requests to revive the turntable system. As such, we decided to develop a new system for Hi-Fi use. Here we provide an outline of our intent in this development.

Direct-drive is generally considered to be for DJ use, and belt drive is for Hi-Fi use. In the 1970s, when Technics invented direct-drive turntables, their performance and reliability were first recognised by broadcast stations. High acclaim was then received by audiophiles. The high-precision rotation and absence of S/N ratio degradation were particularly attractive to these users. The high torque and reliability of direct-drive were recognised by DJs, and direct-drive turntables became the standard in the club scene.

Technics was also a leader in incorporating innovations, such as vibration-damping materials, cabinet construction, and insulators. Having inherited the DNA of Technics, we do not wish to merely make a replica of the SL-1200.

In other words, our intent in this development is to redefine the direct-drive turntable reference."

We like the way that Technics characterises turntables as having “disappeared briefly from the market”, and the reason for their return as “their warm sound”.

We’re told that direct drive turntables, where the motor is connected directly to the central spindle, are more expensive to make than belt-drive devices, but are ultimately better - especially for DJs.

The SL-1200 series was first seen in 1972 and has been through at least six revisions since then. The new models will feature better sound through new techniques to remove small motor vibrations (known as “cogging”). There’s microprocessor control for accurate speed and a three-layer structure consisting of brass, aluminium and rubber, to dampen mechanical vibrations from the player and its surroundings.

Delivery is expected around Summer 2016 and although prices are so far unannounced, the decks won’t be cheap. Panasonic classifies them as “Audiophile” devices, so expect a bill of at least a few thousand dollars.