What audio applications can you use alongside Lightworks for Linux? 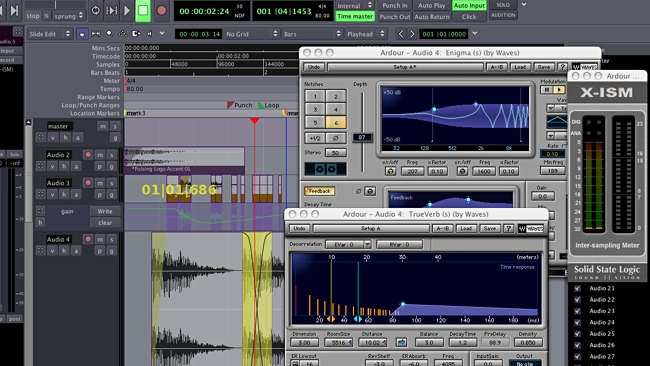 Lightworks is a great video editing tool but if you want more low-cost, high-octane audio assistance there are places to go. Chris Erswell investigates

"Lightworks is a lean, mean editing machine and having a full blown audio suite built in will only slow Lightworks down," wrote  a  regular Lightworks user recently in the Lightworks forum.

I agree with this sentiment. Lightworks is primarily a video editing suite: designed by editors for editors, but not an audio editor. Of course, video does usually come with an audio track or two and any video editor will need to be able to do basic audio effects like EQ and crossfade and Lightworks has both. There may be room for some tweaking and a few additional effects but realistically audio editing is best done by audio editors which come better equipped for dealing with it. In the world of professional film and broadcast, tasks are divided up between specialists and each will prefer their own specialist tools.

Which brings me to an interesting recent development in the world of professional audio editing. It is not often that an open source application becomes adopted by the professional media industry. Linux and Mac users will instantly recognise the name of the Pro-Tools killer competitor Ardour, the brainchild of British software engineer Paul Davies, but users of the Windows platform may not. This is because it has only recently been ported to Windows in early 2012 under the name Mixbus.

Harrison Mixbus is a commercial single payment or subscription cross-platform DAW with all the features of the open source Ardour plus some customisations. There is an initial $49 charge (waived for EDU users) plus $84 a year subscription (not unlike the Lightworks model). Or there is a one time payment of $149.  It certainly is a very powerful audio editor with a steep learning curve. Like Editshare, Harrison's core business is making hardware systems for the media industry - it is well known as the makers of high-end  professional audio and motion picture consoles. Ardour is definitely suited to this end of the market. The Mac port received a favourable review in Sound on Sound magazine back in 2010.

The current version, Ardour 2, on which Mixbus is based, does not support Midi but version 3 will, which will be good news to many. Another rather vital feature for video users is not yet implemented in Mixbus: a video player window to enable audio and video to be synched, but Harrison say that this is being developed for a future release.

Ardour and Mixbus both use the Jack Audio Connection Kit (or JACK) which is a professional sound server daemon that provides real-time, low latency connections for both audio and MIDI data between applications that implement its API. JACK has been developed by a community of open source developers led by Paul Davis (who won an Open Source Award in 2004 for this work). JACK will prove very useful to audio professionals but it can be a little tricky to set up for the uninitiated. Here's the explanation of the purpose of  JACK on the Harrison website:

JACK is a powerful system service that allows applications to route audio between each other, the soundcard, and even the internet.  On Linux, JACK is pre-installed on systems with realtime audio performance.  On OSX,  JACK is installed on the system as part of the Mixbus installation process.  On Windows, a simplified version of JACK is installed for use by Mixbus, which other applications do not see. Please note that the user does not have to be aware of JACK.  Mixbus performs all of the setup and operation of the JACK server using its "Audio Setup" dialog, and handles audio routing using its own methods.

Ardour itself is available separately as an open source programme with a voluntary donation model for Linux and Mac but the devs have always appeared to be unenthusiastic about a Windows port because they say they simply don't have the infrastructure to deal with a huge influx of new Windows users.  That said, it might finally be in sight. Here is an announcement from the Ardour forum

There are no plans for a Windows release until significantly after the release of 3.0. The work on a "windows port" is in the Mixbus branch, and is not the central basis for the Windows release of Ardour 3 that we hope to do later this year (though there is likely to be some things about it that we will use).

This was posted in April 2012 so it may be on the horizon.