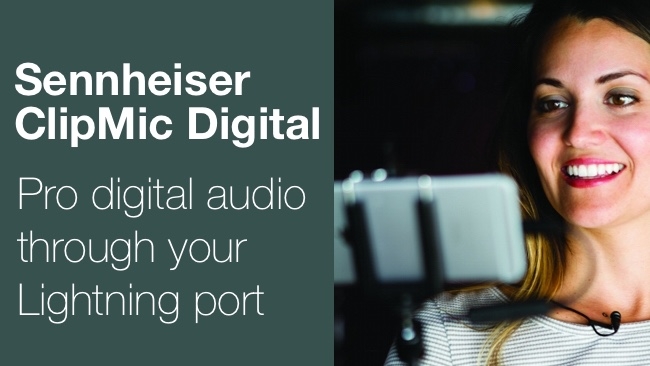 The iPhone's Lightning port is much more than a charging and headphone socket. You can use it to get high quality digital audio in to your phone. Sennheiser has taken advantage of this to make a very high quality microphone with an A/D converter - ideal for making voice-overs and pieces to camera out in the field.

Is there any limit to what you can do with an iPhone? Sometimes it seems not. I mean, it's a music player, a video player, a sat nav, a general purpose computer and - well quite a lot more besides. Oh, and it's a telephone, too! It's also a very good still and video camera? How good? Well, quite a lot better than a stand alone camcorder that would have cost a few thousand dollars just a few years ago. How they do that with such a small lens and sensor is still slightly beyond me but it's a fact.

The video camera is so good that it's now a reality that you could use it for broadcast journalism, as long as you understand that dedicated video cameras will probably always be somewhat better.

But what if it's the only camera you have on you, which as a "normal" person, going about a "normal" life, will usually be the case? What if you turn up at a news-making event and your iPhone is the only thing between you and making a complete piece for broadcast.

Well, you could just point it at the action and record the video. The onboard mic would pick up some ambient audio but it's not going to sound spectacular. After all, this is a telephone.

And if you plug an external mic into the headphone/mic jack, how well is that going to work?

Well, probably quite well, but it will definitely be a few notches down from broadcast quality: good the an iPhone is, it's not going to have professional quality mic pre-amps.

What might not be obvious to everyone is that every iPhone has a digital I/O connector. It's called the "Lightning" port, and it's fully capable of receiving digital audio from an external device, as long as you run a suitable app to receive and handle the incoming sound. It's this all-digital path into an iPhone (or iPad or iPod touch) that has inspired Sennheiser to make the ClipMic digital. It's a Lavalier microphone that comes complete with a very high quality combination of a mic amp and an analogue to digital converter (made by none other than Apogee!) and is terminated with a Lightning connector.

What this means is that you can record with a quality lavalier microphone via an all-digital connection into your iPhone. The fact that (post converter) it's all digital means that the iPhone has no effect whatsoever on the quality of the audio. It just stores it for you.

Now, this arrangement takes some thinking about. It's a distinctly stand-alone arrangement. It is ideal for one-person operation. It's definitely not OK for multiple users. Here's what you could use it for.

Second, you can absolutely use this to record audio for video. Just make sure that make a handclap in front of the lens at the start of the video, and you'll be able to sync it up in one go (within limits - it will drift out of sync eventually which you can fix by cutting the clip into sections and syncing them individually).

For DSLR recording and other circumstances where your video recorder doesn't have a convenient audio input, this would work very well. And the fact that it's stand-alone, means you don't have to use a radio mic.

Thirdly - and this is possibly the most exciting application - if you can mount your iPhone on a small tripod (you can buy Tripod adaptors for phones from Amazon) you can make your own pieces to camera, complete with great sounding audio.

This is actually a bigger deal than it might sound, because high quality audio is one of the most effective means you can use to make video "seem" better. Modern iPhone video is already very good, but coupling it with great audio is going to make it seem more credible. Impressively the Apogee converter will record up to 24 bit/96 KHz. I always think it's worth recording in 24 bits because you will have extra headroom in case of unexpected transients.

You don't have to use the ClipMic Digital in combination with the supplied Apogee apps. As long as it's plugged into the Lightning connection, the iPhone will recognise it as the microphone to use and will take its input from it. This worked first time for me and there doesn't appear to be anything else to set up.

If you're going to use the system for stand-alone audio recordings, the Apogee app is easy to use and will also manage your recordings. You can link it to Dropbox as well, which is a very effective way to give your iDevice the file system it sadly lacks!

To me, the audio sounds very good. If you're used to the sound of a good quality lav. mic., then that's exactly what you get.

So, once you get your head round it, this begins to look like the sort of kit you should carry with you all the time. It hardly weighs anything, it's self powered, and it lets you capture sound alongside video that will boost the perceived quality and usefulness of your iPhone recordings.

Well done to Sennheiser for coming up with a truly original - and useful! - product.