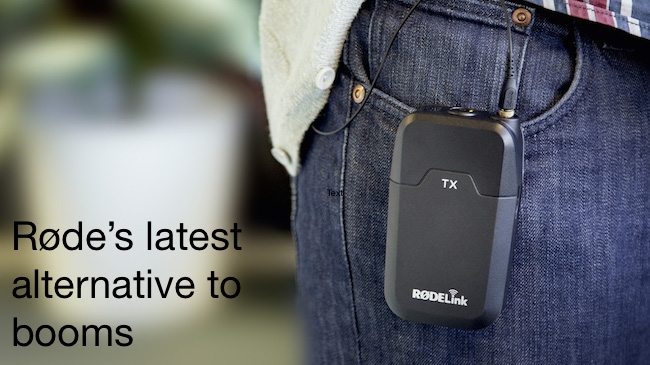 Using radio mics instead of booms: Sparky Film recently tested out the newly released RødeLink Cinema radio mic kit and was rather pleased with the results.

We recently produced a short film for a potential client we were pitching to. Traditionally we would always film these sort of features using a shotgun mic to record the audio, the classic 416 on a boom, but for this shoot we wanted more freedom to use our track and dolly on many of the shots without having to worry about boom poles or stands getting in vision.

We went with the option of using radio mics instead, but wanted to be sure of obtaining high quality sound. We have a few sets of Sennheiser G3 radio mics, but I was really interested in the newly released RødeLink Cinema radio mic kit. The specs of these were very impressive and they looked very straightforward to use. We purchased two sets and decided to give them a test on this short feature. Before the shoot we tested the RødeLink Filmmaker mics alongside the G3 series and found no real difference to speak of in audio quality, so we had every confidence in using them on the shoot.

Setting up the mics and pairing them was easy. They are slightly larger than the Sennheiser mics, about 20% bigger and no heavier in my opinion. They include everything in a very stylish package. Their features include: Series II 2.4GHZ digital transmission: 128-bit encrypted signal: up to a 100m range. Also included is everything you might need such as the omnidirectional Lav microphone with wind shield and clips.

To attach the receiver to an XLR input, you do need to purchase a Røde Minijack (3.5mm) to XLR adaptor — but these only come in at around £5. We have ended up using the jack to XLR lead from our Sennheiser which is the same fit.

To keep the mic out of shot we used some Rycote undercovers — which allow you to fix the microphone to skin and clothing — effectively hiding the mic from shot, and it also has the benefit of reducing wind noise and rustle from clothing. It’s always worth having a set of these in your audio bag.

You can judge the quality of the audio yourself by watching this short clip. This was filmed with the Sony F5 in 4k rendered out to a 1080 file. We were very happy with the results and look forward to using them going forward. Indeed, Sparky Film has no hesitation recommended this set to anyone in the market for some new radio mics!