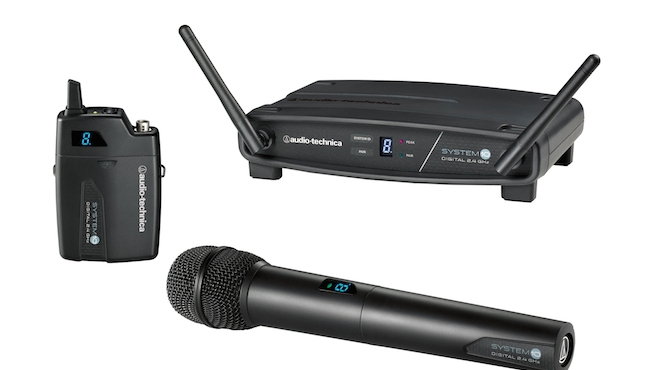 Fully digital wireless for under $500

Built with indie productions in mind, the system is designed to be easy to use, and fit into ENG style audio workflows. The main draw of the system is it’s an all-digital 24bit/48 kHz signal; this provides a high fidelity sound compared to analog systems. The transmitter sends a digital audio signal which will be quantized to 0s and 1s rather than an analog waveform. It also removes the need for using a compander, used to squeeze and un-squeeze the full dynamic range of analog audio into the tiny frequency space used by wireless mics.

It’s also a space diversity system, which means that the transmitter and receiver are actually connected on two different signal paths. The receiver is monitoring both paths constantly and instantly switching between them depending on which path has the stronger signal at any given moment. It’s also why the receiver has two antennas, one for each “path”.

Normal wireless systems run on the whitespace between television signals in the UHF or VHF range. These very powerful TV signals designed to travel miles, can cause interference, also there are different rules and regulations in different countries on what frequencies you are allowed to operate on. The Audio- Technica System 10 brings the frequencies up into the 2.4GHz range, which is shared with things like home wireless internet routers, and baby monitors, and is essentially wide open for low-power use world-wide. I asked Audio-Technica: “Aren’t you just trading one set of interferences for another?”

How well does it work?

The automatic frequency selection of Audio-Technica seemed to be working well. I tried it on the show floor at Broadcast Asia, the industry trade-show held in Singapore each year, where I was fighting for spectrum with about 30 different wireless network hot-spots from various exhibitors, and the signal stayed rock solid.

“We designed it for the independent producers, they need something easy to use, and that they can use straight out of the box” S.K. told me. “Pairing the transmitter and receiver takes less than 30 seconds, and you’re ready to go.”

The receiver itself is tiny, it’s 5.6cm x 9cm and weighs only 105 grams, so it fits comfortably on smaller cameras, and includes a headphone output as well, for monitoring audio in case your camera doesn’t have one.

The receiver comes with a rechargeable battery. You can use a micro USB cable (which we provide), to connect to an external power source such as a laptop or phone charger. On a 4 1/2 hour re-charge, this battery will run for more than 12 hours.”

The transmitter is powered still by AA batteries, also small, at 7cm x 11cm at 100 grams (without batteries), and has that all important “mute” button prominently positioned. It has a range conservatively estimated at 30 meters.

The Audio-Technica System 10 Camera-Mount Wireless System looks like a promising contender in the wireless microphone space. Its 24 bit/ 48kHz digital operation and unique diversity features hit the right tech specs, while a sub $500 price point gives it at an outstanding price/performance ratio. It’s definitely worth a look if you're in the market for a radio mic system for your camera.