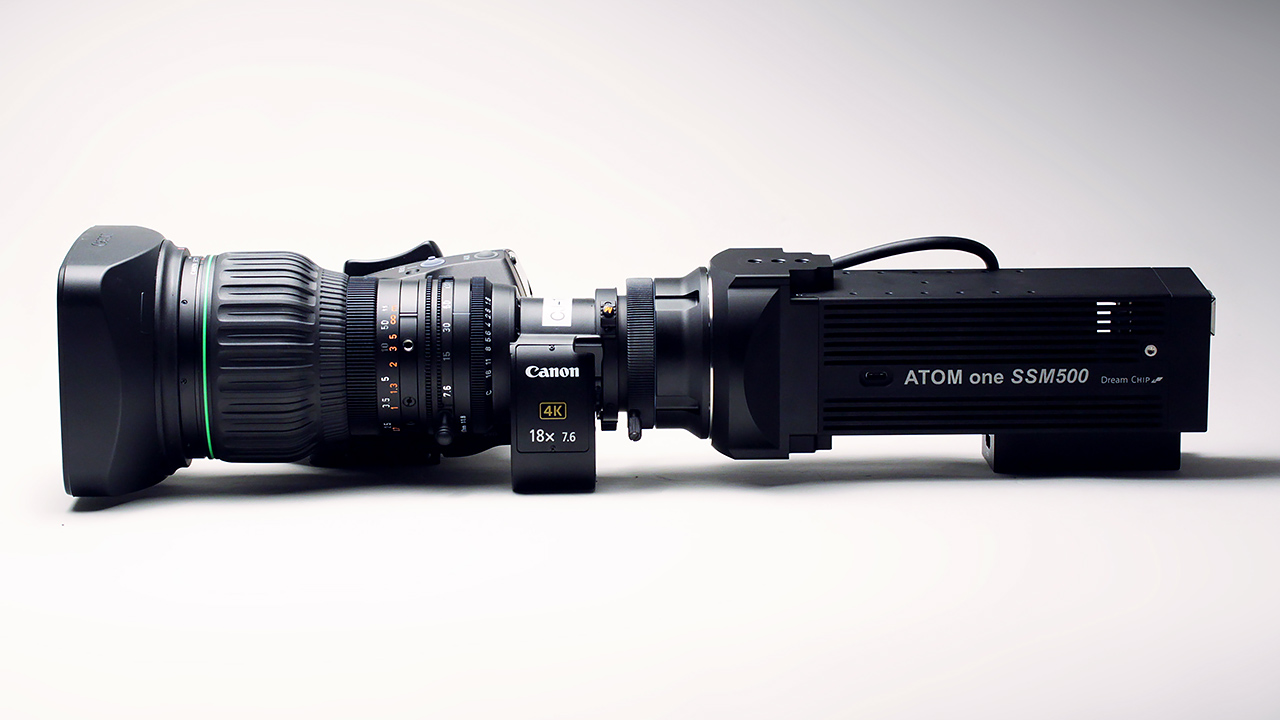 Phil Rhodes casts his eye over the Atom One SSM500, an ultra slow motion broadcast camera housed in a tiny package.

There’s a part of the industry where size matters, and not in the usual sense. Tiny cameras are important inside cars, on drones and in all kinds of other interesting applications, and manufacturer Dream Chip offers a lot of options in that field. As with more or less every other kind of camera, a lot of progress has been made in the last decade or so. It’s now possible to pack a huge amount of pixels, enough for 4K images, in something literally the size of a matchbox.

Enter the Atom One SSM500

The Atom One SSM500 camera pushes things further still, though it does exceed the almost cuboid form factor of many of its POV siblings. The SSM500 is a box about 60mm square by maybe two hundred long, excluding the B4 lens mount (the C mount is a little more compact). Within that chassis it packs a lot of capability, shooting five hundred HD frames per second with onboard buffers sufficient to acquire for a solid minute. There’s some quite advanced colour matrixing, significant connectivity, and a huge wedge of SDI outputs to supply various types of downstream device.

This is very much a broadcast camera, and even if that’s not your field it has some very interesting features that are quite specifically designed to work nicely as part of a live OB. In that role, it’s likely to be found in situations such as polecam, at least in the C mount version, so it can float gracefully around a sports field and solve arguments about whether a ball crossed a line.

Most of the other routes to this sort of frame rate involve a lot more bulk and weight, though for the most handy package one would prefer the C-mount version. We see the B4-mounted SSM500 in use here with a Canon CJ18ex7.6B lens helpfully supplied by the nice people at Canon. The 18x7.6 is intended for 4K work and has more than enough sheer resolution to satisfy the HD sensor on the SSM500. 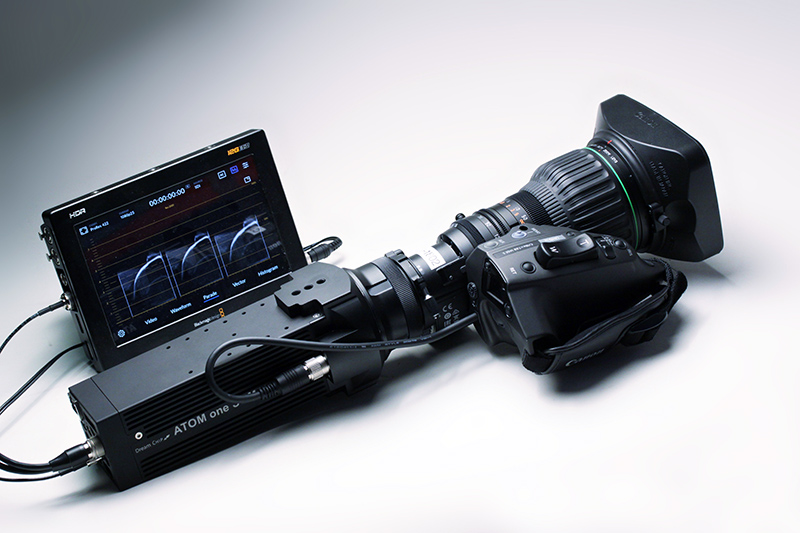 One thing I should be clear about is that the SSM500 is very much intended to be cabled up to an OB truck. With that in mind, four of the 3G SDI outputs work sequentially in the same way as many slow motion cameras, providing live feeds to suitable servers at an aggregate 240fps. Going faster than that, or working without the backup of a truck-full of gear, of requires use of that onboard buffer, as well as some sort of external control device.

There are no controls of any kind on the camera itself; all the configuration is via either RS485 serial or Ethernet control. There are remote control panels that would nestle tidily alongside a conventional RCP in a truck, or laptop software that works via a USB to RS485 dongle and a suitable cable. Lacking an eight-figure outside broadcast truck, this is the configuration in which the SSM500 was tested here.

No less than five SDI outputs, genlock in, plus network and RS485 serial. If you can't connect something up to this thing, it's not worth connecting up!

As befits an OB camera, there is a vast amount of configurability, from the basics like frame rate, shutter timing and sensitivity to the details of how the noise reduction and all that colour matrixing works. The idea is to give the vision engineer an easier time making it match more conventional cameras. The buffer memory is, optionally, split into up to four regions which can be used to independently record and replay material, so it’s possible to record one sequence while playing back another. The fifth SDI output always shows the live image, for viewfinding. In the accompanying photos, the Blackmagic Video Assist 12G serves as both viewfinder and recorder.

Treating the SSM500 as a standalone camera requires a separate control device – a laptop, most straightforwardly – as well as a recorder to record stored slow motion sequences. One of the best things about it, though, is that the RS485 serial protocol is relatively straightforward. Give or take a bit of light programming, in a modern context a controller can be built around something as simple as a small microcontroller board, making the camera particularly suitable for novel applications requiring unified control of several at once or cooperation with other devices. 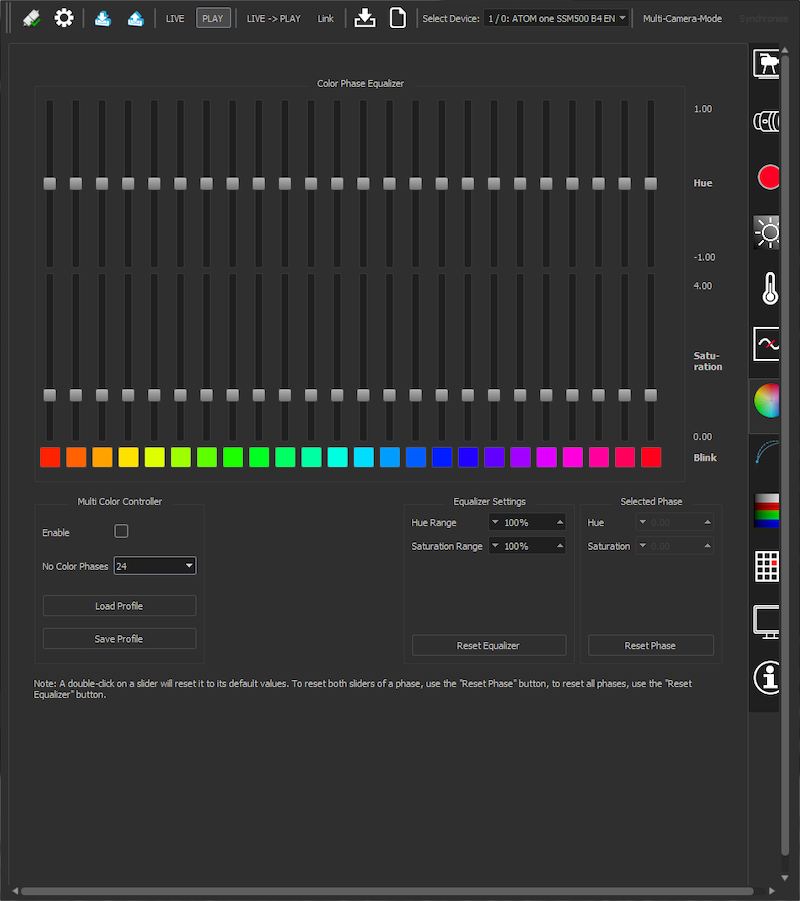 That's a lot of colour control. 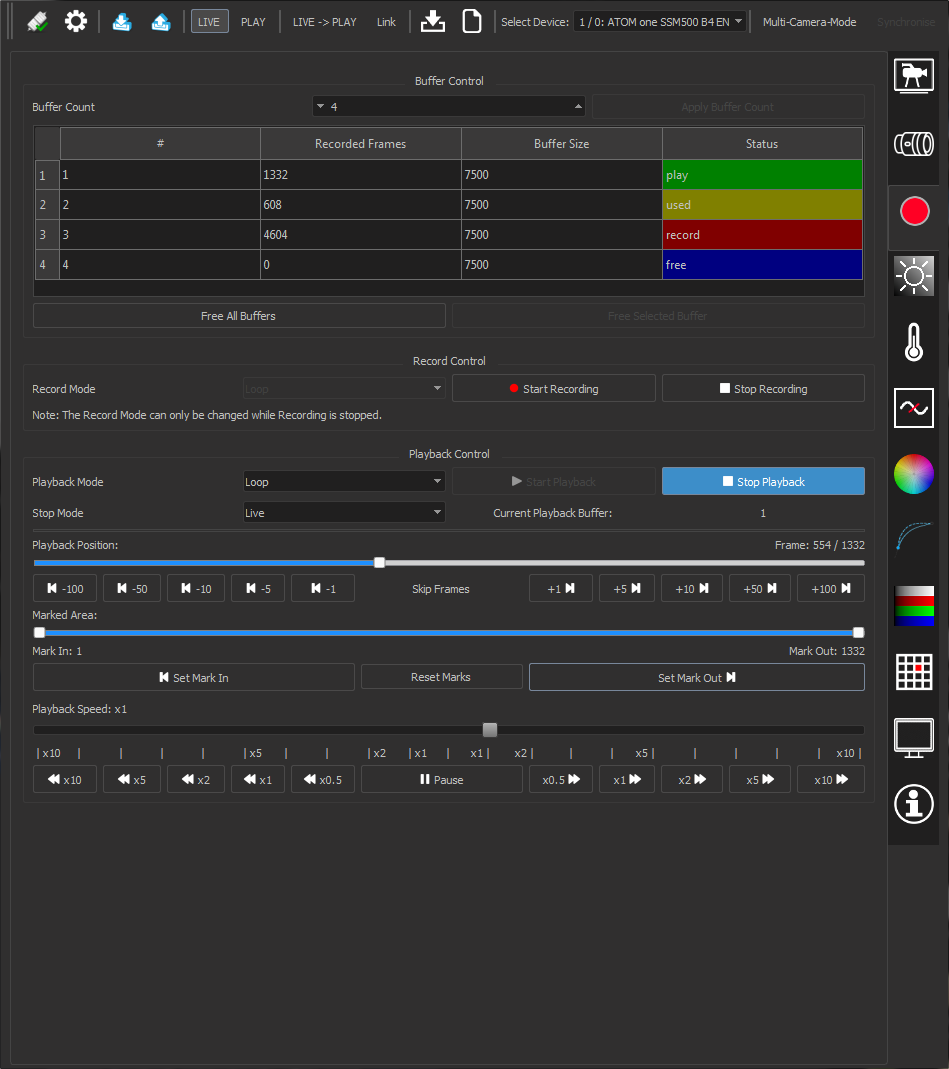 The recording and playback control panel with four buffers configured.

Shooting lots of frames per second naturally implies short exposures and either a lot of sensitivity or a lot of light. The specifications for the camera state a sensitivity of 640 ISO, and there are HLG, PQ and SLog3 modes for people in need of a little more dynamic range, though they naturally reveal some noise when viewed on a 709 display. Naturally, a reasonably small-sensored camera has its limits in terms of noise, sensitivity and dynamic range, but that’s a necessary compromise for something that needs to be compact and avoid huge, cinema-style lenses. 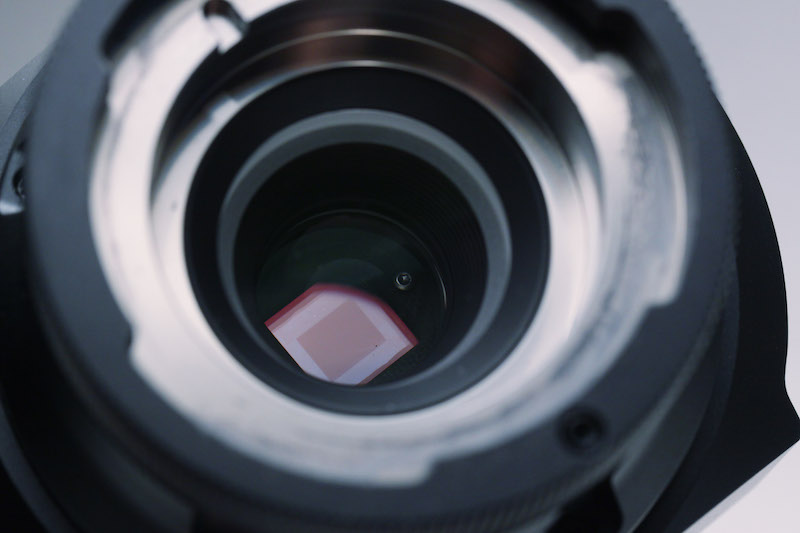 The B4 mount includes relay optics to properly land the B4 lenses image on the sensor.

There is a little less dynamic range the faster we go. Company numbers suggest the camera loses two stops between 300 and 500fps. It’s not going to replace a Phantom; five hundred frames isn’t enough to show bullets going through eggs or the minute detail of an exploding firecracker, but it’s more than enough to slow human action down to the point where real detail is visible. It’s possible to imagine the camera also being seen in industrial analysis, sports coaching, or similar situations where a small, easy-to-handle high speed camera with onboard recording that doesn’t cost six figures might find use.

Speaking of price, the Dream Chip Atom One SSM500 camera sells for around $7,890 in its C-mount version, or $10,980 in the B4 version. At its core it’s a slow motion camera for broadcast, and a very compact one, weighing under a kilo and consuming an extremely frugal twenty watts. Slow motion is pretty and the results are hard to argue with. Expect to see them floating around sports events in the near future.