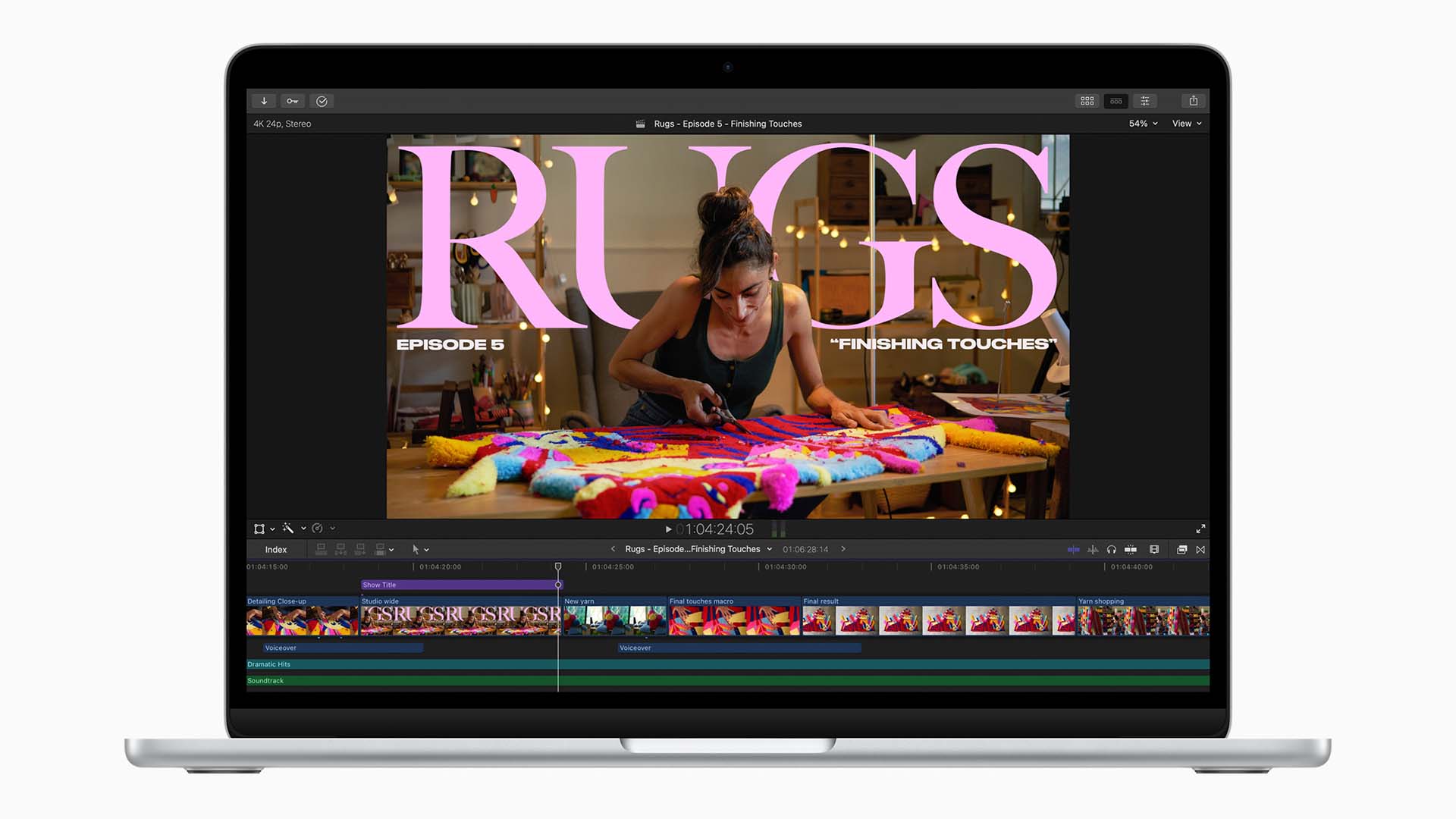 This year’s Apple event for developers showcased a slew of new features with a theme of intelligence, sharing and communicating with new personalisation. Second generation M2 Apple Silicon, new laptops and a major advance for iPadOS were of particular note.

Two years after M1’s announcement we get a successor which again targets the entry-level, best selling Macs and will, no doubt, be upgraded as the year progresses with more cores, more capability for more powerful Macs. 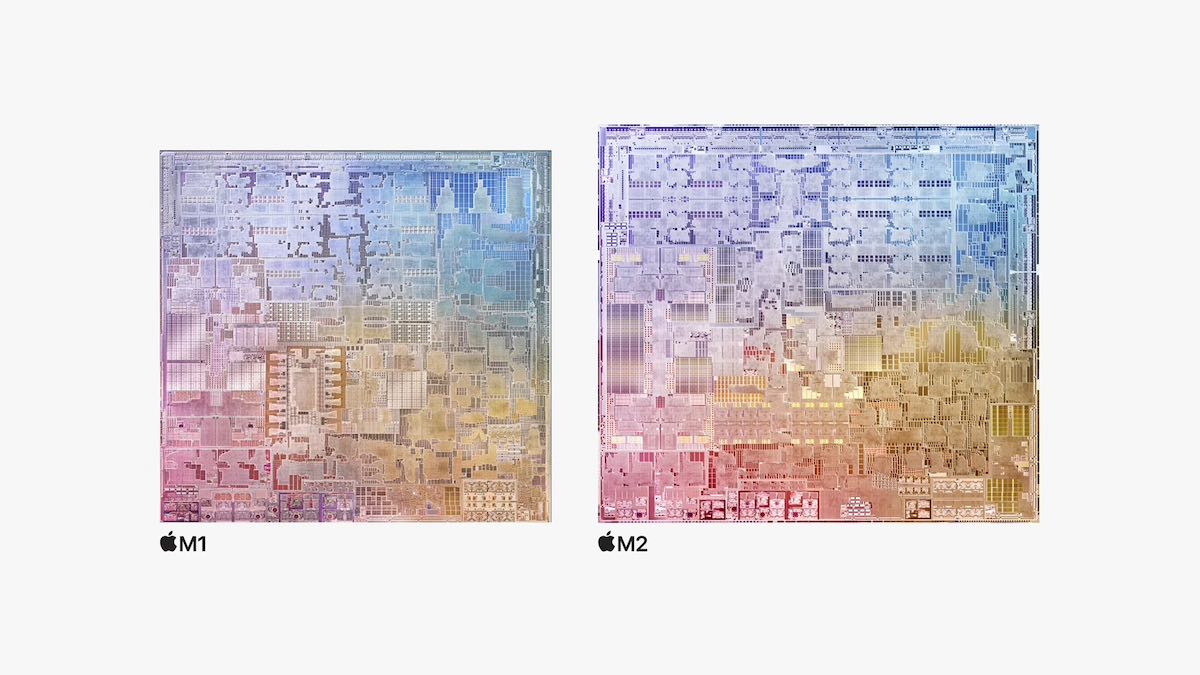 The M1 side-by-side with the new M2. Image: Apple. 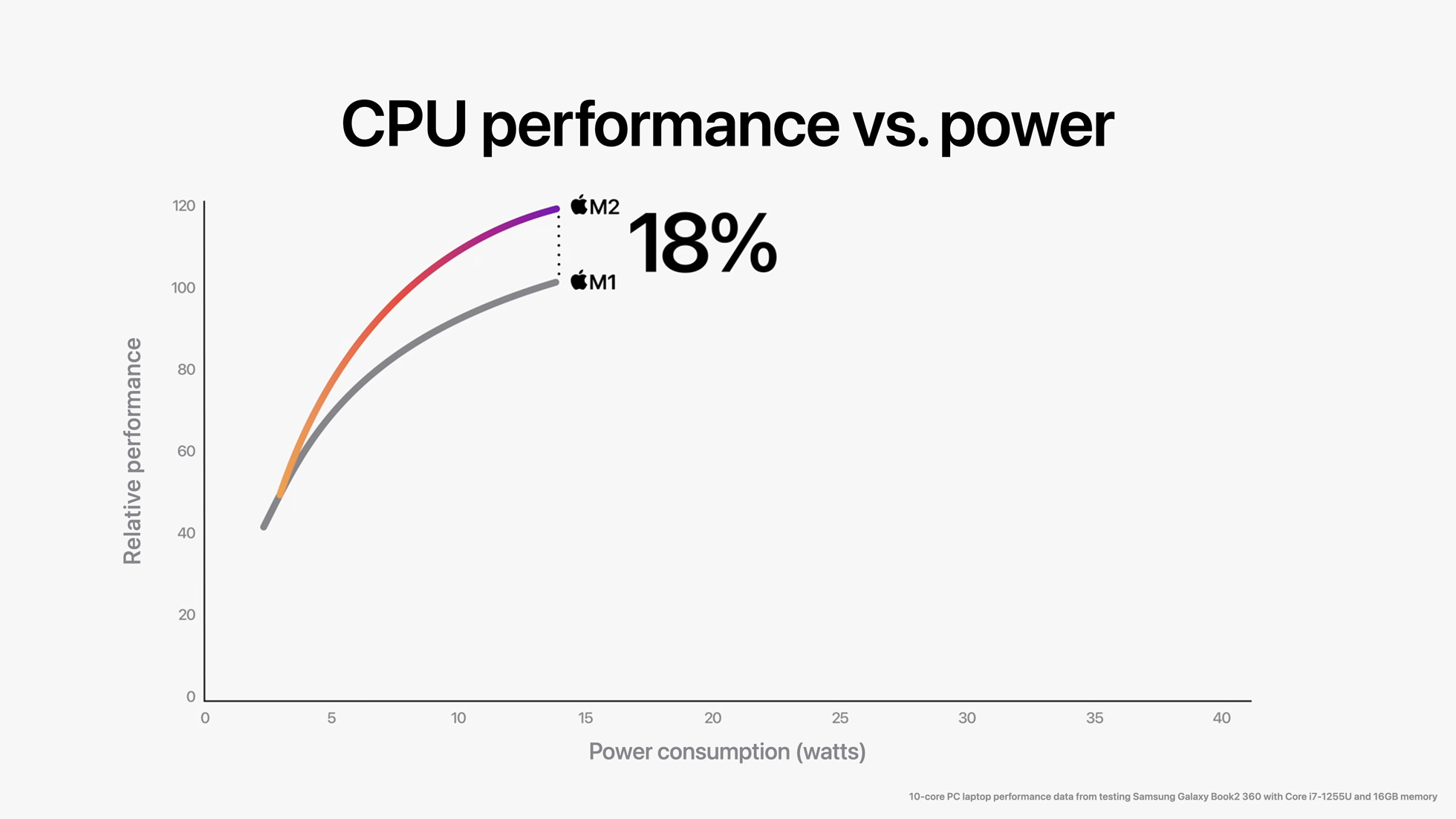 The M2 CPU has the same 8 core layout as before, four high performance and four low power efficiency cores, but a second-generation 5nm process enables 25% more transistors (over 20 billion in total) and an 18% faster CPU. Memory bandwidth is increased by 50% to 100GB/s and there’s support for up 24GB in LPDDR5 memory (up from 16GB in M1). The GPU’s core count is increased to 10 for 35% faster performance, but there’s an entry level option with 8-cores. While M1 offered hardware support for 4K, H.264 and H.265 video encode/decode, M2 adds ProRes, ProRes RAW and 8K as was originally seen with the M1 Pro/Max chips. There’s also a 40% faster neural engine and an increase in CPU cache memory by 4MB to to 16MB.

By Apple’s own primary goals of power efficiency, they claim M2 offers 87% of the performance of an Intel 12-core laptop chip at 25% of the power. This allows them to deliver the ultra slim, fan-less Air without compromising performance for that class of machine, while still ensuring plenty of headroom for pro upgrades.

The world’s bestselling laptop has been reborn with a radical new design which ‘evolves’ that distinctive wedge profile into something much more like a flattened MacBook Pro 14” or an iPad Pro. The Liquid Retina screen is slightly larger, 13.6 inch rather than 13.3, and 25% brighter at 500 nits but with a notch for a new 1080P FaceTime HD camera with twice the resolution and low-light performance of previous gen. There are also three integrated microphones and four speakers supporting spatial audio and Dolby Atmos. 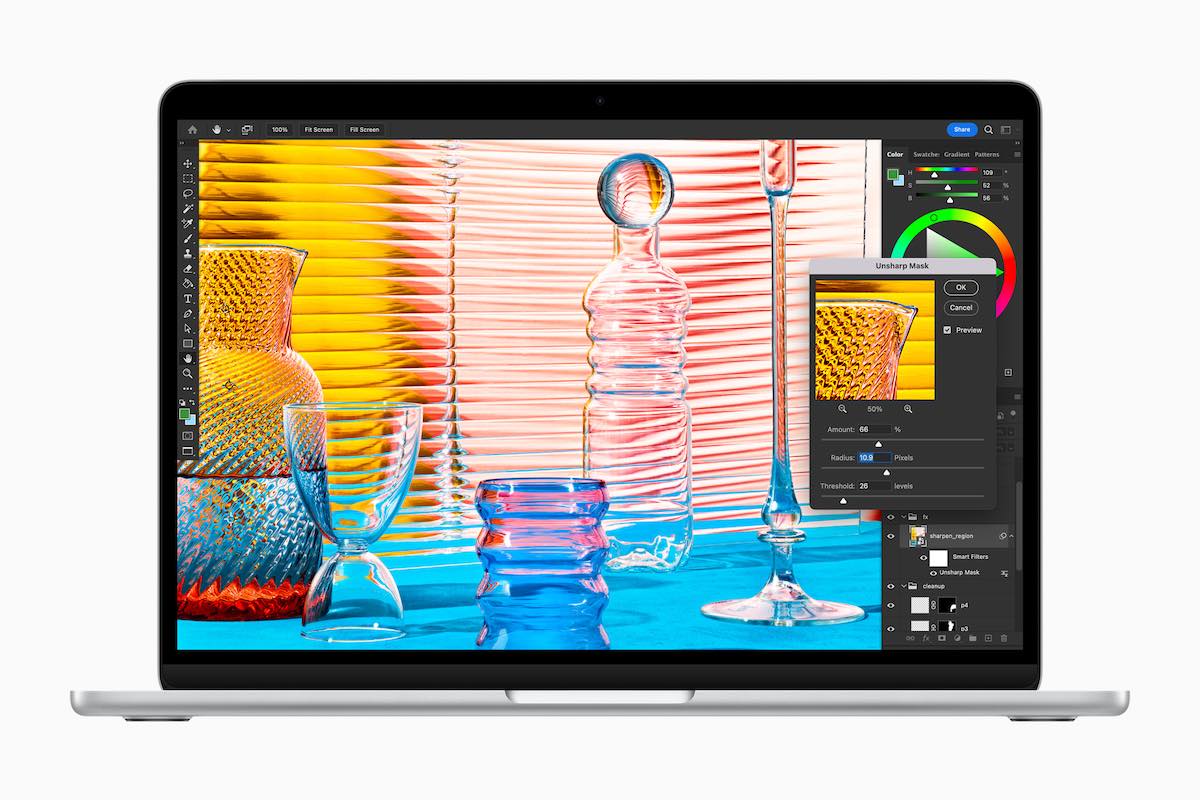 Like the MacBook Pro 14, MagSafe is back and allows for fast-charging. There’s no HDMI or SD Card slot, just two USB4/Thunderbolt 3 ports and a 3.5 headphone jack (with support for high impedance headphones). It can drive one external display at up to 6K resolution. 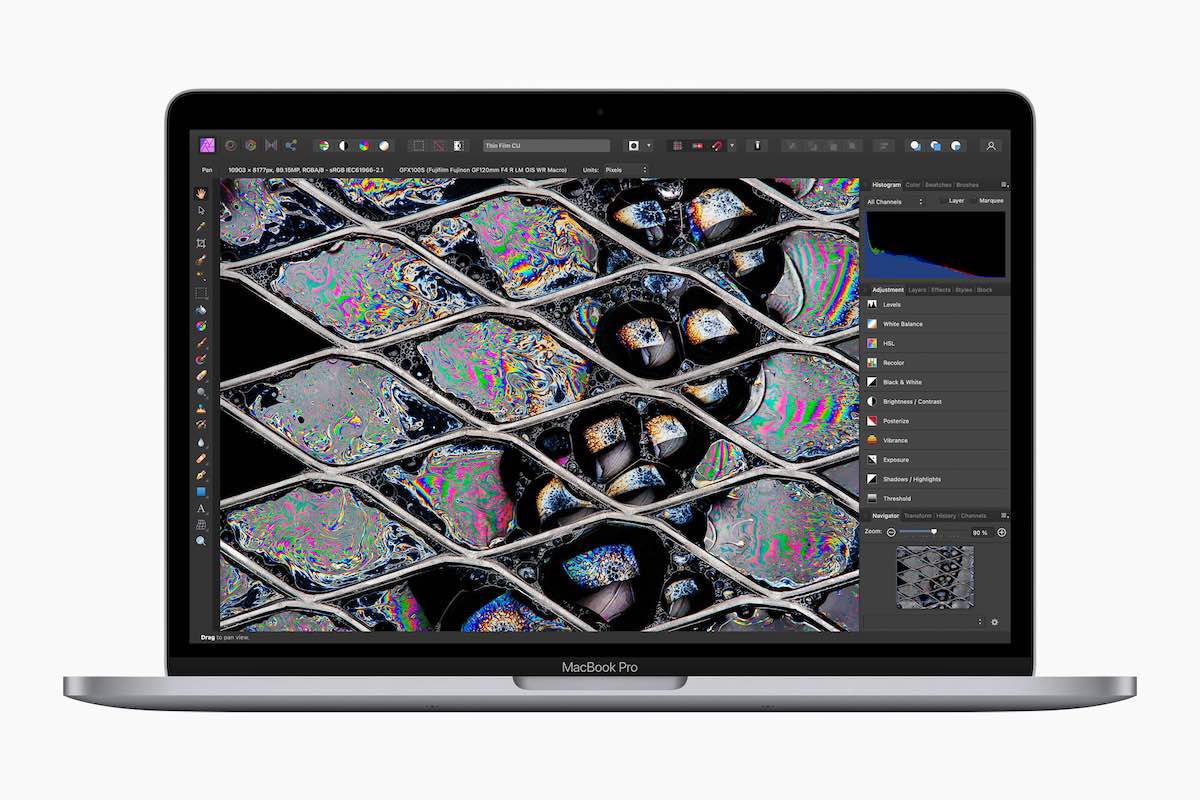 The 2016-era chassis with Touch Bar is retained but the M1 chip is swapped out for M2. In the M1 era, this model was a tough sell given the pricing differential and modest performance advantage, mostly a bigger battery and better sustained performance under load due to active cooling. Now that the M2 Air has gone ultra-slim, the performance benefit could be more significant.

Next year will hopefully see a proper refresh, but at least Apple are being prompt to update the CPU which didn’t always happen in the Intel era. Pricing starts at £1349 for 8-core CPU, 10-core GPU with 8GB unified memory and 256GB storage, while £1,549 ups storage to 512GB. In the M2 presentation, Apple mentioned its GPU delivers 25% higher graphics performance at the same power level, or 35% with highest power state (which could be where the MacBook Pro’s active cooling gives an edge). Availability is from July.

MacOS 13 Ventura appears to be a mostly incremental release, but it drops support for all pre-2017 Macs - and this includes the 2013 Mac Pro that had been on sale until December 2019. While Apple will continue to offer security updates, it’s clear that the focus is on moving toward Apple Silicon asap. The long period when slow Intel updates meant minimal changes for supported models are gone. 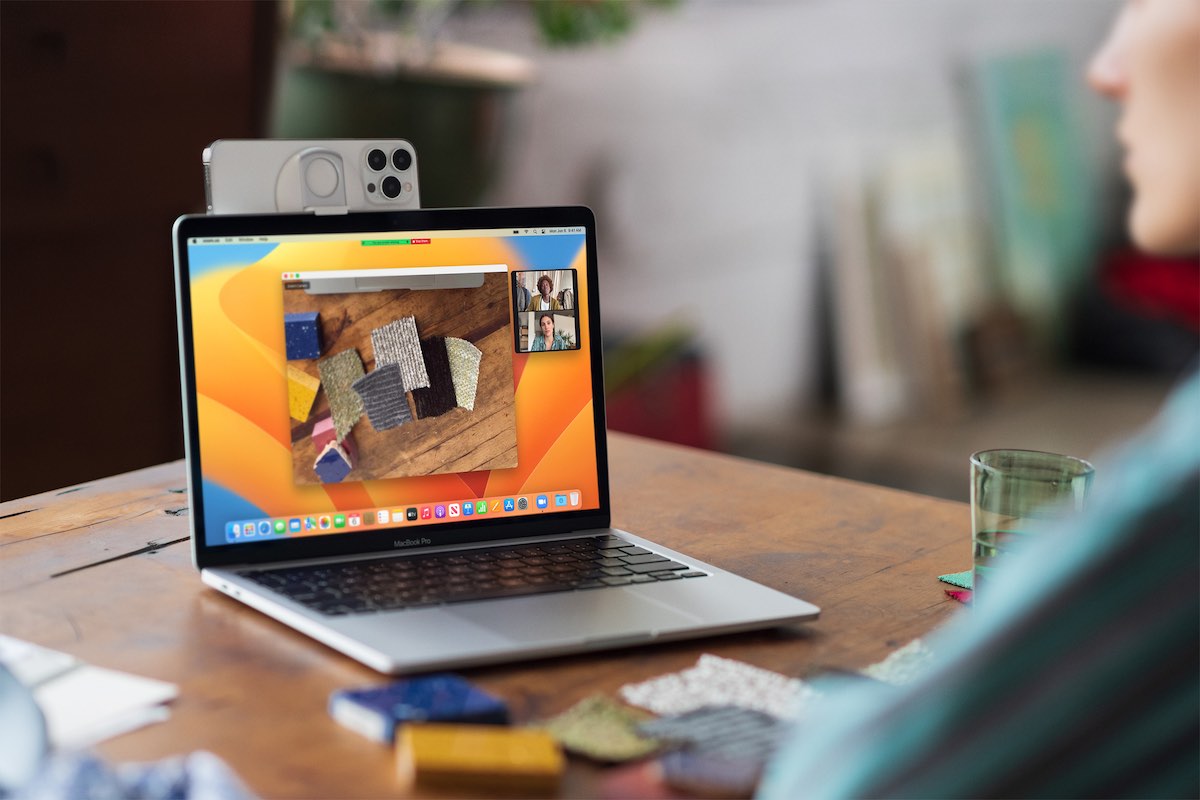 The Continuity Camera feature on macOS Ventura can utilise the wide angle lens of the iPhone to show a top down view of your desk. Clever stuff! Image: Apple.

The headline feature for Ventura is a multi-tasking or windows management system called Stage Manager, which I’ll cover more in iPad section. Other features include Continuity, which allows for an iPhone to be used as a webcam (with Belkin tapped to provide a variety of simple holders). Your Mac will automatically identify the iPhone and enable this option. There’s also significant upgrades to Spotlight search functionality, including running Shortcuts, an upgraded Mail app (with better search amongst other features) and Safari’s introduction of Passkeys - part an industry-wide initiative to remove the need for passwords.

A New Era for Mac Gaming

Metal 3’s headline feature is MetalFX Upscaling which, like similar AMD and Nvidia technologies, uses machine learning algorithms to upscale lower resolution textures to look high res. As proof of this capability jump we saw No Man’s Sky and Resident Evil Village, both AAA PC and console titles, the latter will run at 1080 on MacBook Air and 4K on Apple Studio hardware. How smoothly, how detailed and what frame rates won’t be clear until they ship until the end of the year, but this was an unexpected glimmer of hope in the wasteland of recent AAA Mac ports. The Apple Silicon transition very effectively killed Bootcamp gaming and ports based around Intel’s CPUs, but Apple Silicon may yet turn things around. Intriguingly, it was mentioned these same technologies will also come to M1 iPads and No Man’s Sky will be available.

The hype around this year’s iteration of iPadOS was not so much optimistic enthusiasm as irritation that some promising rumours would no doubt lead to yet more disappointment. As it turned out, in presentation terms at least, Apple appeared to have gone through virtually all the key wish list items and implemented almost all - lack of multi-user support being one exception.

Stage Manager, which was introduced on MacOS 13, is nothing short of revolutionary on iPad. It allows for up to eight apps to run simultaneously. In one view, you can have a primary app running with others apps arranged vertically on the left. You can also choose to have a main app with other apps running in overlapping windows and swap between sets of these. Early reports suggest there’s some automatic sizing and usability sophistication that may need refinement or time to adjust to. Alongside this we finally get true external monitor support, with Stage Manager expanding across an additional screen without issue. The era of simply mirroring a single screen iPad 4:3 screen is gone (for M1 iPads at least). 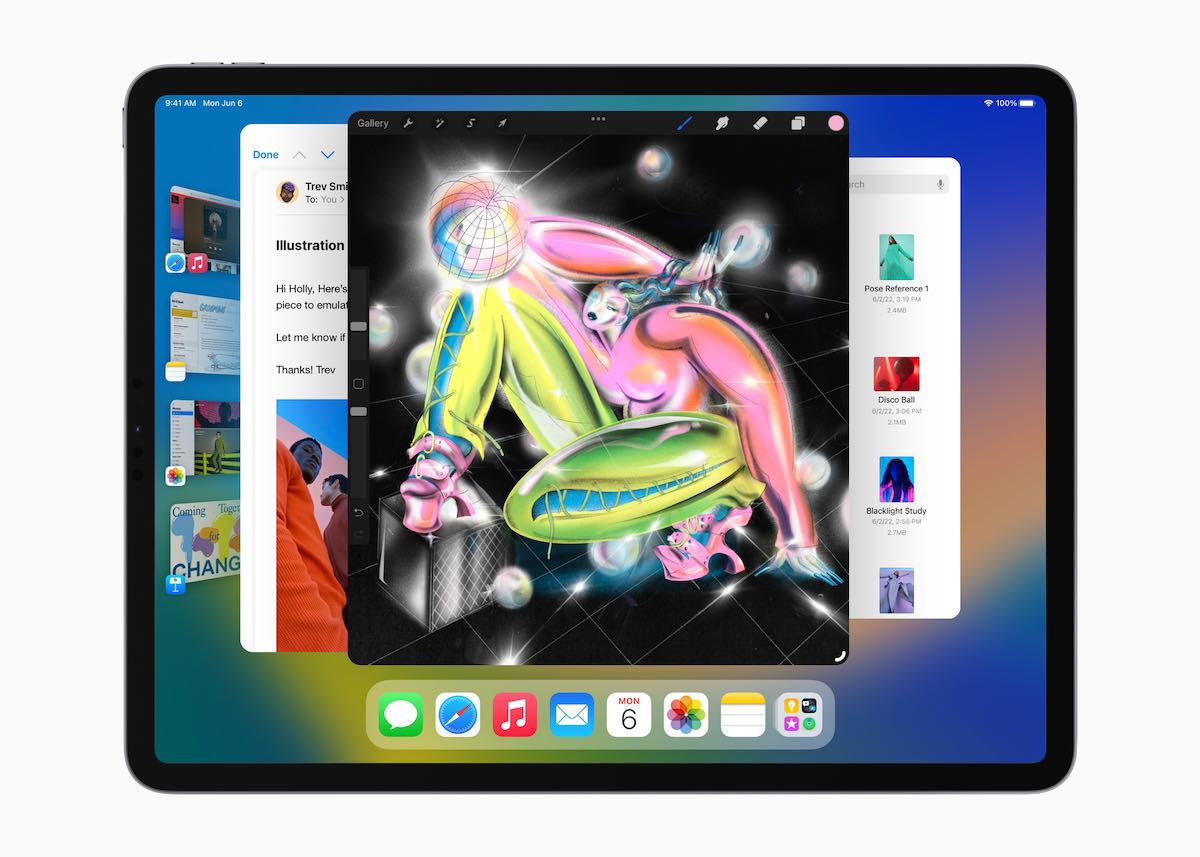 There’s also something called Desktop Apps support, which wasn’t headlined by any specific app such as Final Cut Pro, but collected together key features / APIs that represent previously missing capabilities meaning undo/redo, file extensions, document menu, find/replace, customisable toolbars, display scaling and many more. Virtual memory swap files is common to PCs/Macs, but on iOS has resulted in apps being suspended due to memory and battery life constraints, now it’s an option on iPad. There’s also a reference colour feature for consistent grading across Apple devices. Effectively, a great many barriers to developers building truly desktop class apps are gone. Whether or not they, or indeed Apple, realise the potential remains to be seen.

One intriguing feature is easier Sharing of documents through iMessage, immediately launching into a collaborative document rather than as usual forwarding a copy. The feature set is rich for seeing how collaborators dynamically update the document. There’s also a new whiteboard app called FreeForm, which will be for iOS and Mac, and iPad at last gets a weather app.

The dev beta is available now with a public beta in July and final version due in September.

As the heart of the next iPhone releases due in September, iOS 16 is perhaps the most important of everything for Apple. To the mass market, a complete overhaul of the Lock Screen to be far more customisable is a headline feature. After long lagging Android in this area, Apple has jumped in with an ambitious update, with graphical flourishes such as multi-layered imagery and also practical benefits with support for multiple widgets. For 2022, these appear iPhone exclusive and not coming to iPad. 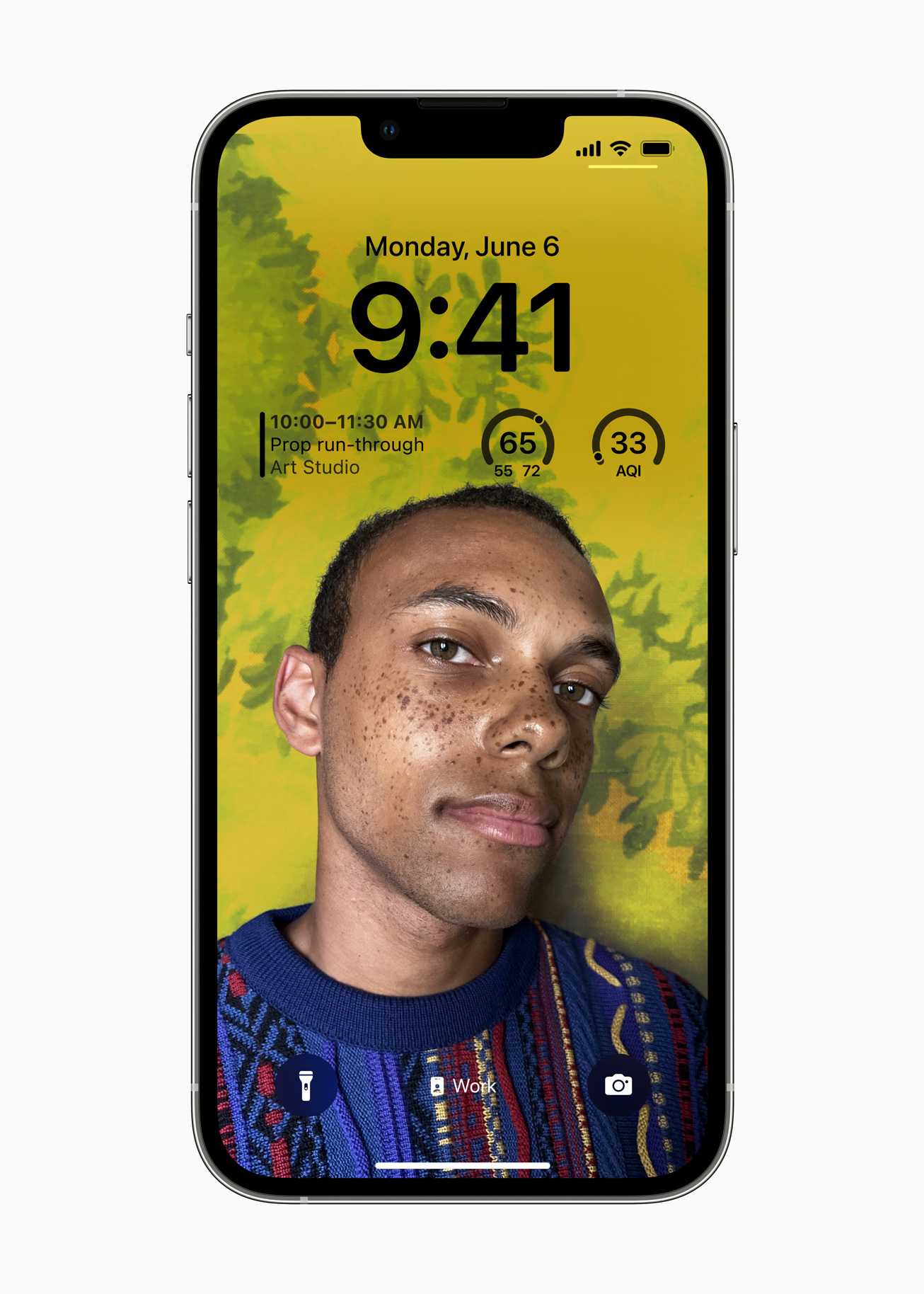 Notifications are also upgraded, as are Focus modes - you could set Safari to only show work-related tabs when in that Focus mode, plus there’s API support so third-party developers can offer similar flexibility. iMessage gets the ability to edit and delete sent messages, plus on-device AI offers improved dictation, as well as much improved ability to seamlessly switch between dictation and typing.

In the ‘finally’ category, Apple Maps gets multi-stop route planning (up to 15) and there’s a iCloud Shared Photo Library for families with some sophisticated AI options such as an option to only add pictures with specific people featured.

CarPlay is radically overhauled with support for completely taking over a car’s UI, from speed and revs through to seat warming and aircon functionality. WatchOS 9 is a more iterative update, adding enhanced support for AFib heart monitoring, new workouts, medication monitoring, plus four new watch faces. Support for Apple Watch Series 3 is dropped.

For professionals, the M1 Air was an excellent entry-level device and M2 with chassis upgrade makes it an even more tempting option, but the real power performance will be with the higher end machines - the pace of these upgrades will be interesting to see, but we’re still waiting on even a glimpse of Apple’s apex Mac - the all new Apple Silicon MacPro which should arrive this year. Apple’s move into AR/VR with realityOS and headset seems likely pushed into 2023, although we can’t discount a sneak peak later in the year.